How to calculate libration amplitude of objects orbiting the $L_4$, $L_5$?

Is there a way to calculate the libration amplitude of a test object that orbits the $L_4$ or $L_5$ Lagrange points?

By amplitude I mean the distance along the orbit between the two extremes of libration. I.e. the point in the tadpole orbit (as examined in a co-rotating frame) where the orbiting test object is farthest from the planet, and then the point at the other extreme where the test object most closely approaches the planet before turning back toward the $L_5$ (or $L_4$).

Without working out any equations, on the surface it seems that the amplitude (as well as whether the object is in a tadpole or horseshoe orbit) will depend on the energy the test object has when it is captured. Is that a safe assumption?

At first glance, this looks like a horribly complicated problem. Here is an example of a tadpole orbit around around $L_5$: 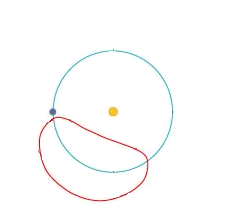 Geometrically, it is very irregular. That, however, is a projection in a co-rotating frame of reference. The same orbit in the inertial frame is actually an almost perfect ellipse: 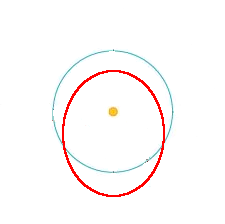 In for instance the Sun-Earth $L_4$ and $L_5$ points, the gravitational influence of the Earth on the object is almost negligible. (And the minuscule influence that exists is self-dampening by the very nature of the Lagrange points).

There are of course cases where this is not true. Firstly, if the mass ratio of the two massive objects is small, and secondly if the amplitude is very large (bordering a horseshoe orbit). However, in both of these cases, stability is lost. The triangular $L_4$ and $L_5$ points are not stable if the mass ratio is smaller than 24.96, and a too close minimal distance to the second most massive body will cause the amplitude to change rapidly and chaotically.

Therefore, the oscillation of an orbit somewhat offset from one of the $L$ points is not primarily caused by gravitational interactions with the second most massive object, it is simply a matter of orbital velocity being higher in the periapse of an elliptical orbit than in the apoapse. The property you are looking for to describe the magnitude of the oscillation is then best described by the eccentricity of the elliptical orbit.

Not the answer you're looking for? Browse other questions tagged orbital-mechanics orbit lagrangian-points gravity-fields or ask your own question.

18
How does orbital eccentricity affect positions of Lagrange points $L_4$ and $L_5$?
6
Do objects at the $L_4$ and $L_5$ points conserve angular momentum?
7
What, if any, libration points exist in systems of multiple orbiting bodies?
7
Why would Hollywood's Planet X (at earth's L3) be unstable?
14
How to best think of the State Transition Matrix, and how to use it to find periodic Halo orbits?
2
Who called the Lagrangian points as "Libration" points and and why was the terminology "Libration" used?
3
Can mascons have Lagrange-like points? In principle? At the Moon?
3
How to calculate the Lagrangian points positions?