I'm doing some research in to the various NASA long term programs for human space exploration, and I'm having a really hard time figuring out how they are really different. It seems that since the "90 day report" in 1989 the plan has essentially been:

There has been so far as I can count 4 different versions of that plan, established under Presidents George H.W. Bush, George W. Bush, Obama, and Trump, but they all basically seem to say the same thing when I start looking, except they want to scrap the "overpriced" rocket from the previous administration and start their own.

Am I missing something fundamentally, or are all of these programs basically the same thing?

My current thinking is there are some elements that are more focused in some versions then others, and some different names given. Here is my version of what the various plans entail, and where they are different. Still a work in progress. 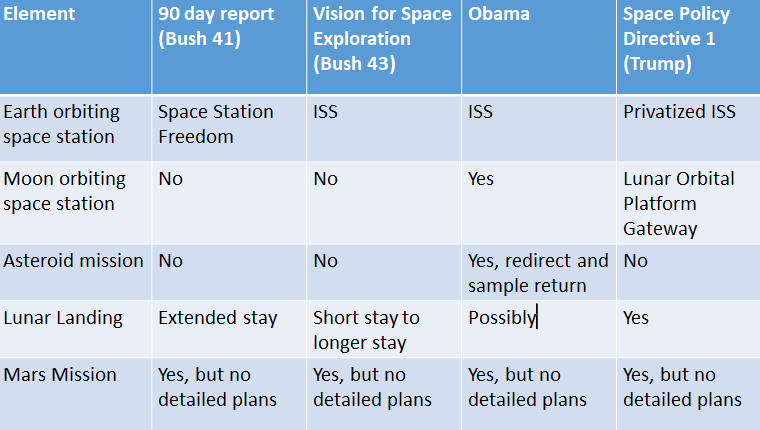 Not the answer you're looking for? Browse other questions tagged mars crewed-spaceflight nasa future-missions or ask your own question.

17
Is artificial gravity feasible in manned long-term space exploration?
13
What eventually killed the Augustine Commission Report Option 4B, Directly Shuttle-Derived Heavy-Lift Launch Vehicle, a.k.a. DIRECT?
3
What is the US government's long term vision for space development and exploration?
6
What is the Trump-era path to deep space?
11
What ever happened to the Asteroid Redirect Mission?
1
What are the biological effects of a toe-to-head force gradient upon a human over the long term?
3
Long term sustainability of Space Flight