Expected differences between concrete prepared on the ISS and matched samples prepared on Earth? 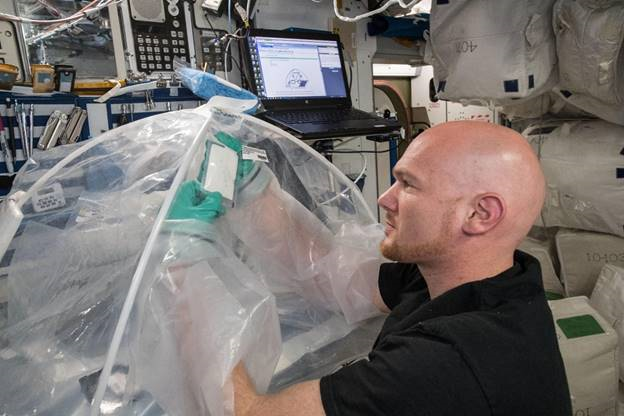 The Spaceflight Now article Cygnus arrives at station with CubeSats, quantum physics experiment describes experiments that will be done on the ISS mixing small samples of either cement or concrete (I don't know the difference) with water and allowing them to harden. They will be returned to Earth and compared to matched samples prepared on Earth.

It is hard for me to imagine why there would be any difference except for gravity, and for such (presumably) small samples, I'm not sure how that would matter. The article mentions two questions they hope this will address:

Another science experiment carried by Cygnus will study the solidification of cement in microgravity.

“We are looking into colonizing space,” said Aleksandra Radlinska, principal investigator for the cement experiment from Penn State University. “We want to go to the moon and deep space beyond, and we will need shelters for the human missions. We will need to protect equipment from radiation effects and impacts that these could experience.”

Concrete could be a “go-to” material to build such shelters, she said.

“In our research, we actually look into how cement reacts with water, and how this very complex process of microstructure formation happens in space,” Radlinska said.

Radlinska’s team sent up multiple pouches with cement and water for astronauts to mix on the space station. The samples will come back to Earth for comparison with the results obtained from similar pouches mixed on the ground, according to Juliana Neves, a graduate researcher on the experiment at Penn State.

The investigation will ultimately help address two questions, Radlinska said: “How can we use it more sustainably on Earth, and how can we make usage of raw materials present in space and make a concrete-like cement binder in space?”

The differences are expected but not foreseen in detail; the researchers have a "hunch" what to expect, but there is no neat table to check against, verifying whether the result matches to 5 sigma with predicted. This is a discovery experiment (find/analyze differences), not theory verification experiment (verify actual properties vs predicted). Most of concrete research and engineering is done through function-fitting on experimental data of varied concrete samples, not on microscale (chemistry) models which could predict results of strange effects like microgravity. There are no good models to predict the exact outcomes here.

This is also why the Earth counterparts. Instead of comparing the samples against a predicted models (which would account for microgravity), they will be compared against a control group, a set of identical samples not subjected to microgravity. It's to discover the differences, and put the "hunches" into numbers.

One of these "hunches" and the focus of the current research is that crystals forming in solidifying concrete will differ, due to lack of convective ion transport; an experiment of 10 seconds in parabolic flight yielded the following results: 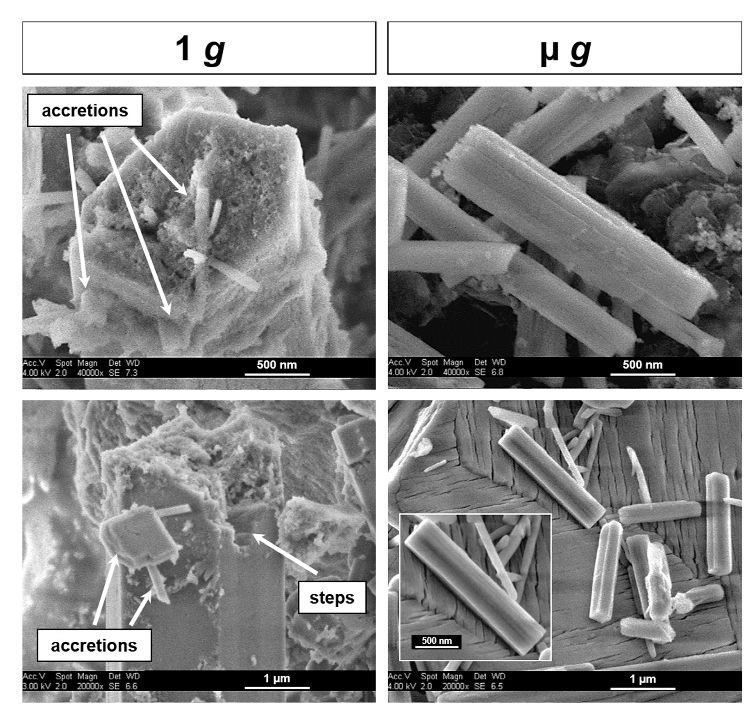 It's unclear at this time, what type of differences in crystal growth will appear and how concrete properties will be affected.

But there's a range of other factors. In particular, where air convection, water retention, internal diffusion and similar factors matter, the outcome may have different structural properties than terrestrial; maybe worse (not enough particle movement to mix on microscopic level, no extra pressure from water column to squeeze water into pores), maybe better (crystalline structures normally disrupted by gravity could form.) In case of outgassing mixtures the result may retain bubbles of gas where otherwise they'd escape to the surface. The in-depth detail of the reactions on micro-scale is not known sufficiently to predict the outcomes.

“How can we use it more sustainably on Earth"

There are many different kinds of cement, with different manufacture processes and different binding chemistries - but the Portland cement is by far most common; all other cements are niche and a margin, comparing to Portland cement industry. It's also very dirty and energy-hungry, the very opposite of "green". Enormous rotary kilns breaking up limestone with additives into dust baked into cement; filtration is sometimes present in more modern factories, in older the cement settles all around, and that is on top of huge amounts of CO2, both from heating the kiln and from reactions of creating the cement.

There are more "green" alternatives; Aleksandra Radlinska, for example, did research about Alkali activated slag cements, which have a much better ecological footprint. The microgravity research doesn't directly contribute to development of more "green" cements, but it attracts focus of investors, academic bodies, and might break, or at least erode the market monopoly of Portland cement - especially, that if such cements are found to be viable for manufacture in space, this will definitely increase terrestrial production, for experimental habitats, for the marketing gimmick of "space concrete" and so on.

"How can we make usage of raw materials present in space and make a concrete-like cement binder in space?”

As I said, there are many cements of many compositions. It's entirely possible to manufacture kinds of cement identical to obtainable on Earth using in-situ resources in space (or engineer cements that are made from materials already known to be easily obtainable in space). The problem is we don't know if such cement would be of any use there. So various samples of cement are being prepared, to analyze their physical properties. Having the results we'll be able to tell what sort of cements - and by extension, what raw materials for making cement - are usable in space, and which ones are useless.

It's unlikely any sample would fail to bind completely, but the properties may differ - and that would be important for future space use of concrete.

Not the answer you're looking for? Browse other questions tagged mars the-moon materials construction or ask your own question.

11
Are there relevant resources on the Moon for civil engineering?
2
What's required to construct a space port on the Moon or Mars?
7
How thick would a Marscrete structure need to be to provide adequate protection against radiation?
7
Low energy cements for Mars and Callisto. Waterless cement for the Moon. Any good candidates?
3
What series of devices would you need to deliver to the Martian surface to manufacture concrete entirely in-situ?
3
Mars: Readily usable sulfur for sulfur concrete?
3
How would we make concrete on the Moon?

11
Practical Lunar He-3 mining approach?
10
What are the synergies between human landing on the Moon and on Mars?
11
Are there relevant resources on the Moon for civil engineering?
20
Apollo communication between the Earth and Moon
2
What's required to construct a space port on the Moon or Mars?
7
What precautions are planned to prevent samples returned from Mars crashing and releasing organisms on Earth?
3
Bucket loop between Earth and Moon?