I'm trying to take into account the Earth geopotential effect on the orbit. The only term I could consider, is J2. 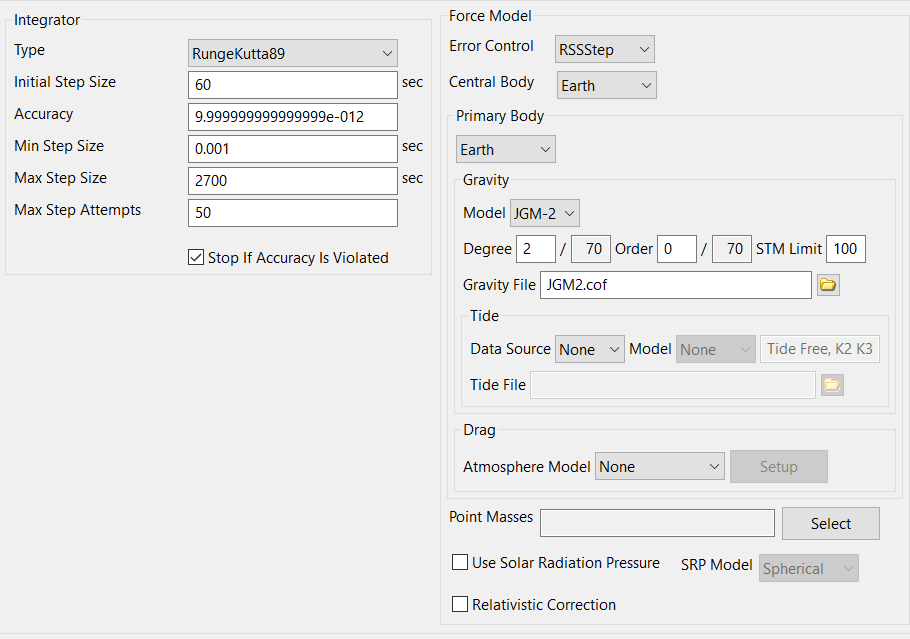 To answer your questions,

Yes, they do. The Earth is still rebounding from the end of the last glaciation, and the Earth's rotation rate is decreasing due to transfer of angular momentum to the Moon's orbit. The end result is that $J2$ is decreasing by about 3 parts per million per century. You don't need to model that, however. The gravity models that GMAT uses are static models. You can enable tides, making the gravity model somewhat dynamic, but the dynamics are purely cyclical. There are no secular terms.

A much trickier issue lies in the $\bar C_{20}$ term. Some of the Earth's equatorial bulge results from tidal interactions with the Moon and the Sun. The spherical harmonics gravitational coefficients are typically computed as if the Moon and Sun were not present. These tide-free models omit the contribution of the Moon and Sun to the equatorial bulge, and hence to $J_2$. (Technically, the frequency coefficients used to model the Earth tides have a zero frequency term that is nonzero.) The Earth spherical harmonics coefficients used by GMAT are tide-free. If you want to model how satellites precess due to the tidal bulge, but don't want to use a full blown Earth tide gravity model, it's better to add a tiny bit to the the $\bar C_{20}$ term. See Section 6, Gravitation of IERS Technical Note 36 for details.

The GMAT JGM-2 gravity model is in the file JGM2.cof of the GMAT source code tree. The first few non-comment lines in this file are

The second value, $6.3781363\times10^{6}$, is the equatorial radius of the Earth, in meters. You should be using this rather than the WGS-84 value if you want to try to match the results from GMAT.

From poking at the GMAT source code, there is a correction for the $\bar C_{20}$ term gravity coefficient if that term includes the permanent tide and if the user enables Earth tides. There does not appear to be a correction for a tide-free value that adds the permanent tide effect if the user disables Earth tides. The widely published value of $J_2$, 0.0010826359, includes the permanent tides. You probably should be using a value consistent with the tide-free value of $\bar C_{20}$, or $\sqrt{5}\,4.8416539\times10^{-4} \approx 0.00108262672$ instead of that widely published value.

The next two lines contain $\bar C_{21}$, $\bar S_{21}$, $\bar C_{22}$, and $\bar S_{22}$. Note that the $\bar C_{21}$ and $\bar S_{21}$ are nonzero. This means that the Earth's axis of rotation is not quite in line with the way we measure latitude and longitude. The Earth's rotation axis undergoes a small polar motion; you should turn this off in GMAT (if you can) to have a better chance of having your integrated state agreeing with the state computed by GMAT. If you can, you should also turn off Earth nutation and precession in GMAT.

To answer your first question:

No, these coefficients do not change over time, at least not in the time scale you are working. These terms depend on the internal structure of the Earth, whose changes are slow and take thousands of years. The higher order terms may vary from one model to another, but their influence in the movement is not significant. Although new models and updates are published, the most relevant terms do not change.

Not the answer you're looking for? Browse other questions tagged orbital-mechanics gravity gmat or ask your own question.

5
Perifocal coordinates and the orbit equation
1
Equation for orbital period around oblate bodies, based on J2?
7
How can I verify my reconstructed gravity field of Ceres from spherical harmonics?
4
Low Earth orbit propagation in GMAT
3
Calculating the Earth Geopotential effect
6
Orbit Propagator with J2 perturbation has larger error compared with simple 2 body Propagator
7
Differences between numerical propagators