Could Dick Scobee have flown a RTLS on Challenger 51L

In a previous question, I explored whether or not, with a call up from an observant Flight Controller, the SRB’s could be separated from the STS-51L stack before the destruction of the ET tank at 73 seconds.
Without commenting on the likelihood of success, I believe it was possible. Was a method available to save the Challenger Crew?

Removing the SRB’s from the stack, does not however save the Challenger crew. At 74 seconds, with the Challenger still attached to the ET, a successful RTLS must be executed.

The boundary conditions for the RTLS are unique:

A nominal RTLS is done as follows: 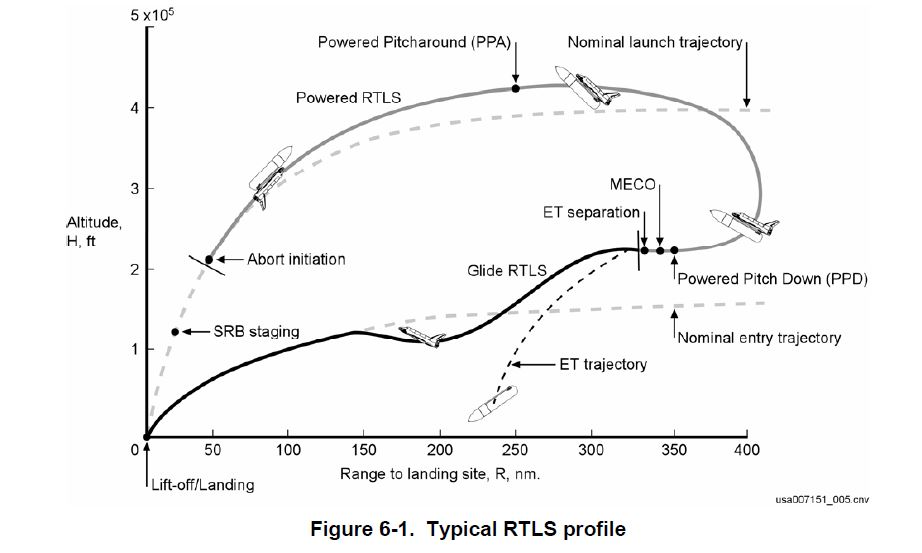 The leak in the LH intertank was sufficiently small that it was compensated for by the ET system until the moment of ET destruction at 72 seconds. As the timeline shows this event began at 72.204 seconds when the RH and LH SRB paths diverged. This was the point where the ET tank forward dome breach occurred and ET structural breakup began and LH tank destruction began. It held nominal pressure (above 32.8 psi) until that event and only the last valid data point shows a downward trend. 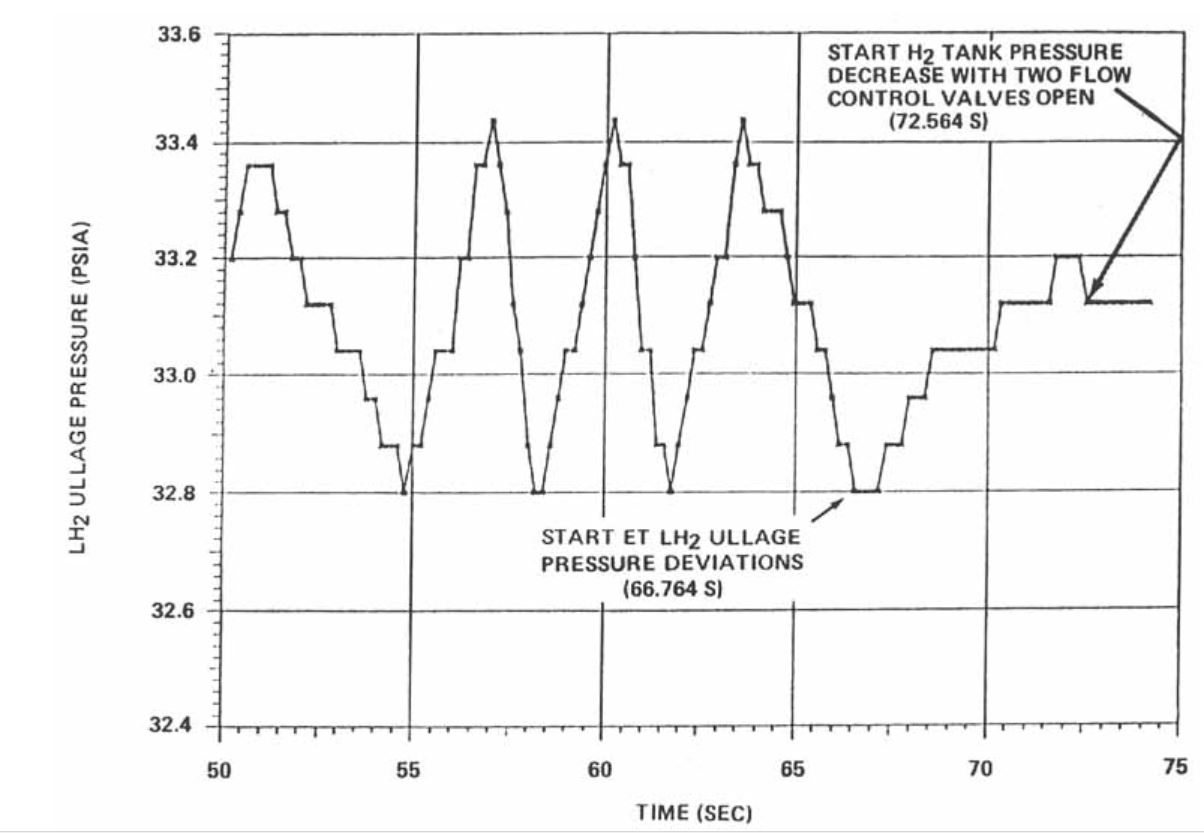 I did some thrust to weight ratios over time using the known data: 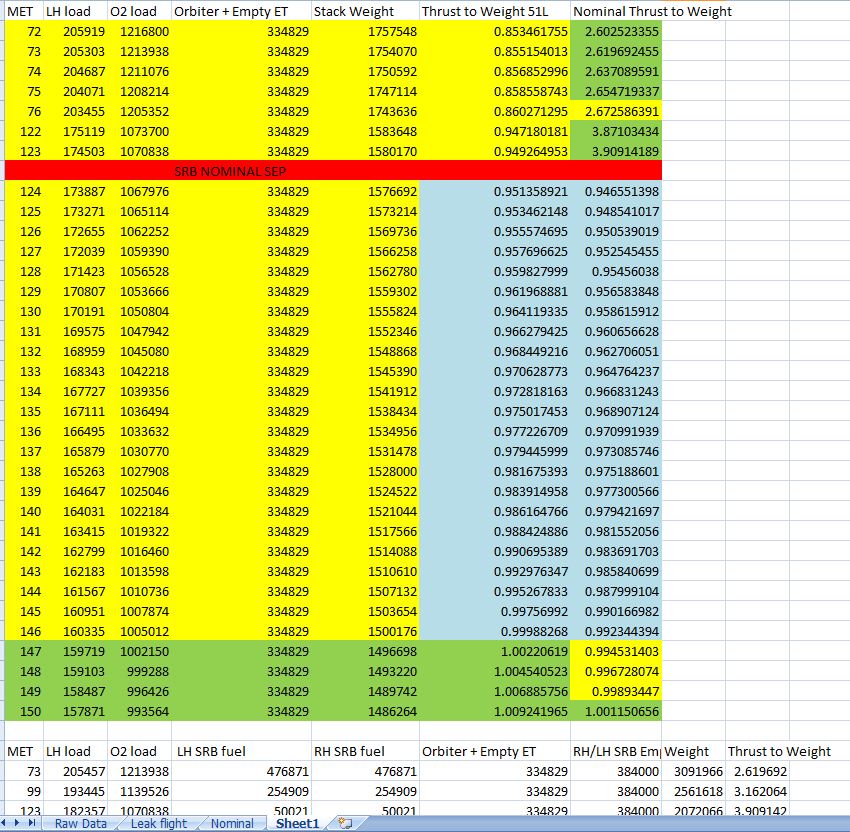 Clearly with the loss of SRB thrust the stack would have been in a ballistic arc. I wonder if ET sep could have been accomplished as the Stack reached the top of that arc? Velocity would have been low and conditions would have been similar to the nominal RTLS post MECO coast, with the exception of the fuel load not being at 2%.

Hypothetically speaking, let's assume the boosters could have somehow detached at T+74s, and had no impact the shuttle. Let's also assume there is no leaking fuel somehow.

The acceleration at T+74s is about 23 m/s^2 with the SRBs. The mass with SRBs at that point is about 1,200,000 kg (2,640,000 pounds), the thrust of the main engines is about 500,000 pounds for each engine. Some of that mass was from the SRBs, but still, the acceleration was too small to gain velocity when the tank was still as full as it was, thus the Space Shuttle would start to slow down. Only at T+140 or so could the Space Shuttle actually accelerate faster then the pull of gravity. The main engines would be throttled down a bit, but still, it would have not been able to keep up.

I haven't actually done the full analysis required to determine this, but I'm quite certain that even if the SRBs had been able to safely leave the Space Shuttle at T+74s it would have still crashed. Ocean landings were deemed not safe. Bottom line, it still would have crashed, although I believe a RTLS would have been attempted.

Successful SRB Sep would have been impossible prior to Pc<50

The SRB-to-ET forward attach fitting was a ball-and-socket joint that carried 100% of the SRB thrust loads to a thrust beam in the ET intertank. The rear attach fittings served only to react the relatively small transverse loads that kept the SRBs and ET pointed in the same direction.

Firing the SRB sep bolts would have severed the rear attach link as well as the single bolt that existed in the ball-and-socket joint in the forward attach fitting, but the net positive thrust from the SRBs would have prevented that fitting from separating.

If the SRBs did separate prior to Pc<50, it would have resulted in immediate LOCV

If, by some miracle, the SRBs did manage to separate out from under the forward attach fitting, they would have shot out ahead of the vehicle, bathing both orbiter and ET in their exhaust plumes. This, too, would have resulted in immediate breakup.

If the SRBs did manage to separate prior to Pc<50 without recontacting or pluming the remainder of the stack, the ET may not have been able to support its new load paths.

During the first stage of flight, the bulk of the thrust is generated by the SRBs. This thrust load is carried to the rest of the stack by a connection to a very thick thrust beam located in the ET intertank. The orbiter's thrust loads, on the other hand, were carried through the rear attach fittings. This means that the ET LOx tank loads (more than 1 million pounds) were very nearly entirely carried by the upper half of the intertank structure, down to the thrust beam and the SRBs. The ET LH2 tank loads were then only subject to the compressive load contribution of the shuttle main engines.

Normal separation involves a tail-off in SRB thrust, which allows a gradual transfer of the load from the intertank thrust beam to the rear attach fittings. Had the SRBs separated while under thrust, the transient response from the sudden shift in load path could have been enough to crush the ET LH2 tank structure.

If the SRBs did manage to separate prior to Pc<50 without LOCV, the ET weighed too much for the SSMEs to maintain a viable trajectory

There are other scenarios that were considered, like a rapid shutdown of the SSMEs and separation of the orbiter from the ET/SRB stack, which, though technically possible, would have also resulted in immediate LOCV. Even if this were to succeed (we would be four miracles deep by now), the orbiter would be on a gliding trajectory to nowhere, with ditching in the ocean remaining the only remaining option, as crew escape was not developed until post-Challenger.

No, it was impossible.

This graph shows that three engines out prior to SRB sep always results in a black zone (defined as "loss of control and/or structural failure or ditching").

Also note that a three engine out RTLS selected at ET Sep results in a black zone. 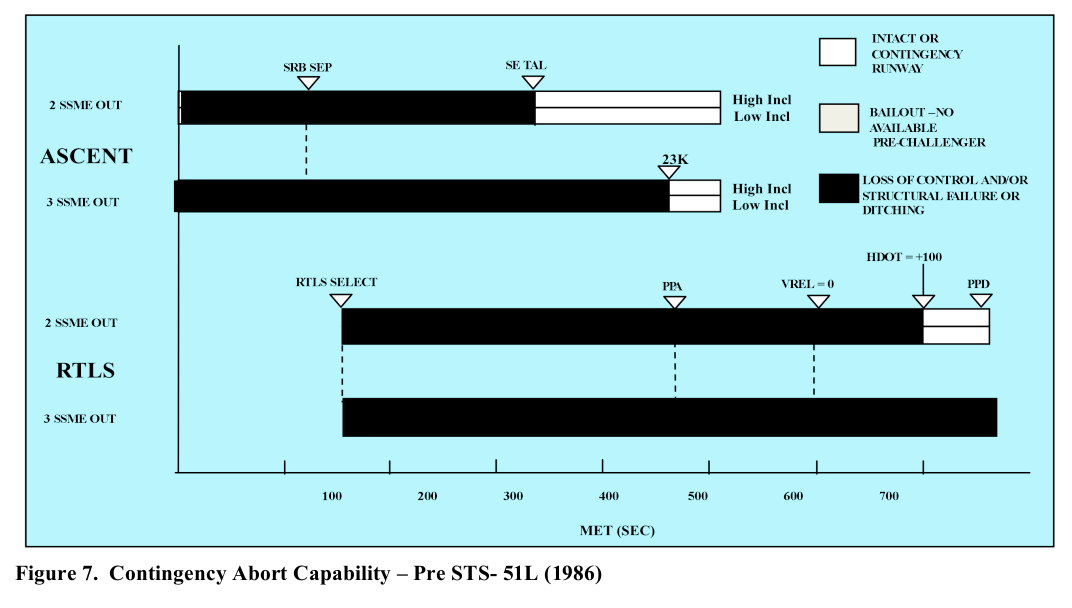 Given the plume impingement, ET recontact, and T/W issues discussed in other answers, selection of RTLS at 73 seconds could only have been even worse that what is shown on this graph.

These black zones got vastly reduced after the STS-51L failure but those improvements, of course, don't apply to the case you are asking about.

The key to any successful RTLS is energy management. The reason for the dangerous PPA maneuver in a nominal RTLS is to bleed off the excessive velocity prior to ET sep and gliding. This must be done within the proper boundary conditions to succeed. In simple terms they must use the SSME to slow down. The problem facing the Challenger pilots was similar but if they took no action the STS stack without the SRB’s would naturally lose velocity. The situation at 74 seconds requires the remaning 51L stack to bleed off excess velocity and get in the correct configuration for post MECO coast and ET sep while not getting too far away from KSC.

So the answer to the first question is that the choice of MECO after SRB sep at 72 seconds is not critical, so long as it is not delayed too long. The vehicle in post SRB sep configuration is doing what you want it to do, lose velocity. Without the SRB thrust the stack is losing velocity at the rate of 10 feet per second even with all three engines running. My very rough calculation with a starting velocity of 2900 feet per second indicate that the shuttle will still be gaining 3800 ft/sec in altitude and moving 1962 feet downrange every second.

So after successful SRB sep give Dick and Mike 15 seconds to regain situational awareness. That puts them at 90,000 feet and 15 miles downrange. Velocity has dropped to 2618 feet per second.

It is at this point seat of the pants pilot skills come into play. Dick Scobee was a Shuttle Carrier Aircraft flight instructor and was familiar with the out of nominal release conditions for the Shuttle and the SCA. He would have been the best astronaut in the program to make this off nominal ET sep decision.

The best move is to increase the loss of velocity quickly so that you can execute the ET sep and start the glide back toward KSC. The most obvious way to bleed off velocity is to do a MECO. With no thrust from the SSME and a 1.6 million pound vehicle, the stack will rapidly lose energy. First, step would be to roll the shuttle into a “shuttle up position” MECO would occur at 95 seconds, at 2240 feet per second, altitude 111,000 feet, 18 miles downrange. The RTLS FSW would take over and control the ET sep process At 1300 feet per second the ET sep would occur. My calculation indicates that this would occur at 18 seconds after MECO or MET 113 seconds. Altitude would be 138,000 feet and 26 miles downrange.

At this point the Challenger is high and pointed away from the KSC landing strip. I believe the Gliding RTLS FSW would be able to handle the situation from MECO onward. The Gliding RTLS TAEM (Terminal Area Energy Management) program would make the turns necessary to line up with the HAC (heading alignment cone).

*TAEM guidance is divided into four sections or phases. The four phases are:

The key to understanding how TAEM works is the concept of "range-to-go." In order for TAEM guidance to work, it must know the accurate distance the shuttle must fly before it can land. It is not enough to know the straight line distance from the shuttle to the runway. This is obvious when one considers that the shuttle must approach the runway at the proper speed and direction. Therefore, the turn necessary to get the shuttle lined up for landing must be taken into account.

29
Challenger disaster: how full was the external tank at the time of destruction?
14
Was a method available to save the Challenger Crew?

10
How could aerodynamic forces break up the Challenger orbiter?
29
Challenger disaster: how full was the external tank at the time of destruction?
14
Was a method available to save the Challenger Crew?
26
What's on the bottom of the Shuttle's external fuel tank?
5
Did NASA archive the audio recording of STS launches
4
Why would a space shuttle have flown a normal first-stage and early-second-stage ascent trajectory during an RTLS abort?
12
Why didn’t the space shuttle’s engine-out checklists include steps for attempting a relight?
2
Space Shuttle RTLS in 3-engine-out: what does it use for propulsion?
6
What were the space shuttle’s emergency procedures for an SRB or ET separation failure?
5
Space shuttle MECO condition: velocity threshold or fuel level?