I'm trying to transform Mars' elliptical orbit into its circular "equivalent". I understand that if the semi-major axis is used as the radius, and the mean angular rate and period are kept the same, there is the bones of the answer.

My question is around propagation of the position. If Mars is at position $x_{1}$ at time $t_{1}$ on the elliptical orbit, and moves to $x_{2}$ at time $t_{2}$ through an angle theta measured at the centre of the ellipse, is its "equivalent" circular position just the same position extended outward to the circle? Apologies if that's not clear, I hope I made myself somewhat make sense.

Edit Credit @uhoh for their constant advice! Here is some important info.

So, I'm trying to plot an Earth - Mars transfer, and I have a bunch of transfers that place me in the same position as Mars, and then I need to match Mars' flight path angle at that point. As a verification, I need to plot an equivalent transfer as if Mars' orbit was circular, and see which transfer has the lowest final flight path angle (as it will be zero for a circular orbit). It is the 2D case!

The period $T$ of some satellite in orbit is determined by its semi-major axis $a$, so for a given $a$ (and central body), the orbital period will always be the same:

However, the angular rate of the orbit will change over time depending on the eccentricity of the orbit, but the mean motion $n$ will remain the same, since it is simply given by $n = \frac{2\pi}{T}$

I believe you are interested in the orbital anomaly which is the 'angle' around the orbit. There are three (main) types of anomaly:

This is the angle as measured from the semi-major axis line around the central body. This is labelled $f$ in the diagram.

This is the angle by which an imaginary satellites would have travelled around a circular orbit with the same period as the one in question. The change in this over time is the mean motion.

In your case, I believe you would want to use the mean anomaly which will give you a circular orbit with approximately the correct timings. However, since all solar system planets have relatively low eccentricities, you can get a rough approximation by taking any of the anomalies and using them as a constant angle around a circle. It's also worth noting that all three anomalies are equal at $t=0$ and $t=T/2$, with angles of $0$ and $\pi/2$.

The Wikipedia pages for each anomaly has the equations for converting between them. This post has a fairly detailed (and brightly coloured) explanation of calculating orbital anomalies. 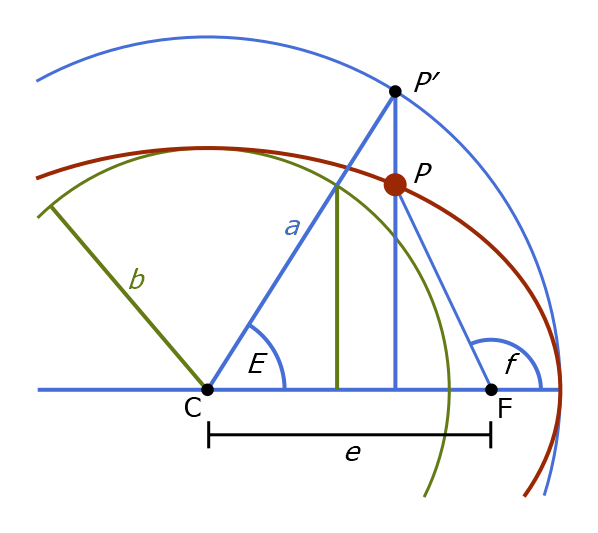 Image by y CheCheDaWaff - This file was derived from: Eccentric and true anomaly.PNG:, CC BY-SA 4.0, https://commons.wikimedia.org/w/index.php?curid=48384905

Not the answer you're looking for? Browse other questions tagged orbital-mechanics mars orbit planet or ask your own question.

2
Calculate Low/High/Geo orbits for other planets? - math lite - gamedev
13
Transfer between elliptical orbits
6
Earth departure flight path angle for fast Earth-Mars transfers
2
Budgeting delta-v for atmospheric drag when orbit is elliptical?
2
Orbital vocabulary confusion! How can the tangential velocity of an elliptical Kepler orbit not be tangent to the orbit?
3
Circular to elliptical orbit delta V requirements
4
What information can I get if an elliptical orbit intersecting a circular orbit of radius 𝑟 and velocity of ellipse is equal to velocity of circular?