What is the maximum speed can a space rocket can travel with an air pressure of 14psi? [closed]

What is the highest threshold speed of a space rocket traveling in an air pressure of 14psi with all of its stages if they where able to leave a solo at Mach 1 or more?

Related: What benefits can be gained from launching below ground?

Probably the historical highest was the Sprint missile which accelerated at 100 G and hit Mach 10 in 5 seconds, amazing speeds in the atmosphere. Obviously it had severe thermal issues. It was also a silo-launched popup missile which lit off after it left the silo.

In the video you can see the characteristic very low speed of the missile at which the engine ignites after emerging from the silo. It is hard to imagine that if there were a practical means of accelerating the missile out of the silo, it wouldn't have been done for this application. (Sprint's mission was to intercept incoming nuclear warheads that had made it through a higher altitude interception screen - it was all about getting to the target quickly) 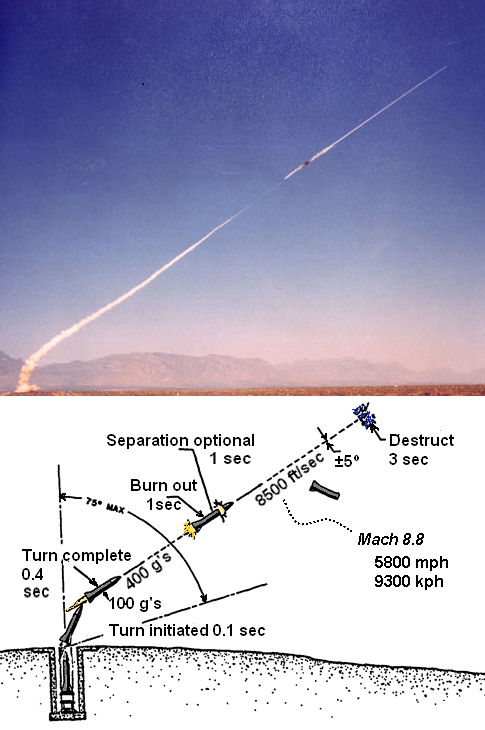 Not the answer you're looking for? Browse other questions tagged launch construction thermodynamics high-pressure-environment or ask your own question.

9
What benefits can be gained from launching below ground?
4
Is it possible to protect a Cubesat's electronics from 100g of acceleration?

7
What is the problem with pressure?
11
Is it possible to use zinc powder as a NTR propellant?
11
Can you get to orbital speed with an air breathing engine?
2
Can air pressure be accumulated this way for a biodome or spacesuit?
9
What benefits can be gained from launching below ground?
1
How would the rocket differ in a higher atmospheric or ambient pressure?
2
Can a rocket be intercepted in mid air?
1
What is the maximum pressure a rocket body can experience?
5
How is pressure distributed in the combustion chamber of a rocket engine?