Fluid loading protocol, what's it and what's it for

In the book Endurance: A year in space, a lifetime discovery, there is a paragraph as follows:

Then I hear Terry’s voice, breaking in midsentence, as if he were here with me: “. . . pills for the fluid loading protocol, Anton? Or did you leave them on station?”

I don't understand what is fluid loading protocol? I can understand it is some kind of medicine that astronauts have to take, but I don't know exactly what it is and what is it for.

Please explain it to me.

One of the most important changes negatively impacting flight operations and crew safety is landing day orthostatic intolerance. Astronauts who have orthostatic intolerance (literally, the inability to remain standing upright) cannot maintain adequate arterial blood pressure and have decreased brain blood levels when upright, and they experience light-headedness and perhaps even fainting. This may impair their ability to stand up and egress the vehicle after landing, and even to pilot the vehicle while seated upright as apparent gravity increases from weightlessness to 1.6 g during atmospheric re-entry.

Starting about 2 hours before landing, astronauts ingest about 1 liter (0.58 oz) of water along with salt tablets. Subsequent refinements to enhance palatability and tolerance include the addition of sweeteners and substitution of bouillon solutions.

The reasons for this condition are not well understood but are linked to the body's physiological responses to free fall.

While orthostatic intolerance is perhaps the most comprehensively studied cardiovascular effect of spaceflight, the mechanisms are not well understood.

The Flight Rules contain more rationale about the protocol

Oral fluid loading with a salt/water mixture similar to body fluids has been shown to significantly reduce detrimental heart rate and blood pressure changes during orthostatic stress post flight. Basing the amount of salt and water (in a proper ratio) or other approved solution on the crewmember’s body mass helps to assure the fluid loading is adequate for larger crewmembers and possibly not too much for smaller crewmembers. ASTROADE ® and other tested isotonic solutions provide plasma volume expansion similar to salt tablets/water and may be easier for some crewmembers to ingest. Flight Surgeons must approve these alternate solutions for individual use prior to flight.

From a wave-off perspective, the desire is to delay fluid loading as close to TIG as possible since weather wave-offs often occur just minutes prior to TIG. However, consuming too much too fast can cause gastric discomfort and vomiting.

If fluid loading is initiated 1 hour prior to TIG but deorbit is subsequently delayed, the impact is crew discomfort and increased WCS usage . Although this is undesirable, it is not a safety issue. However, if fluid loading is delayed and the reduction in the change in plasma volume at landing is significant, then crewmembers may feel faint or dizzy upon return to 1g and may not be able to egress unassisted. This can be a safety concern for crewmembers involved with landing the vehicle and for all crewmembers in an emergency egress scenario.

and the table of how much to drink 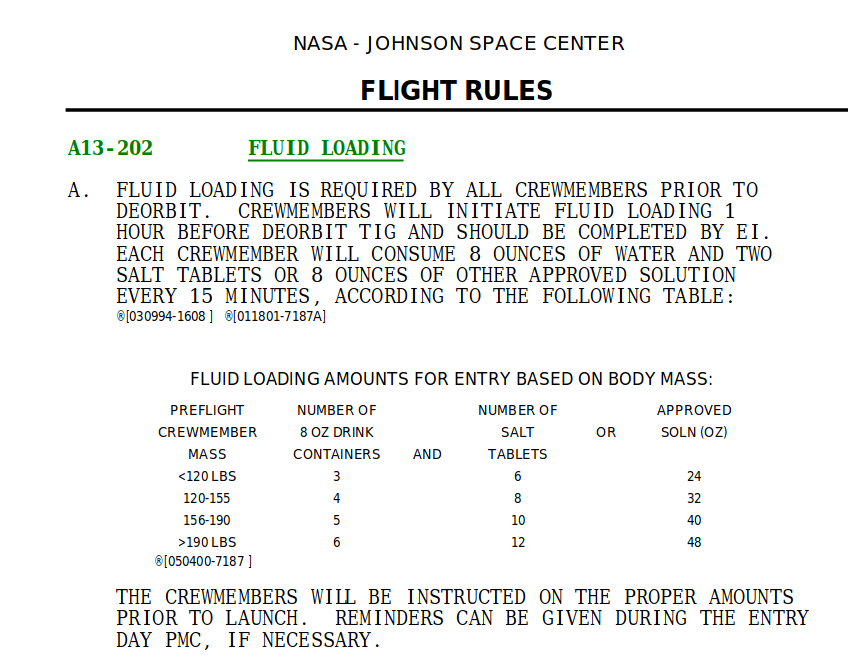 This page from the Deorbit Preparation Checklist shows the protocol in the timeline. 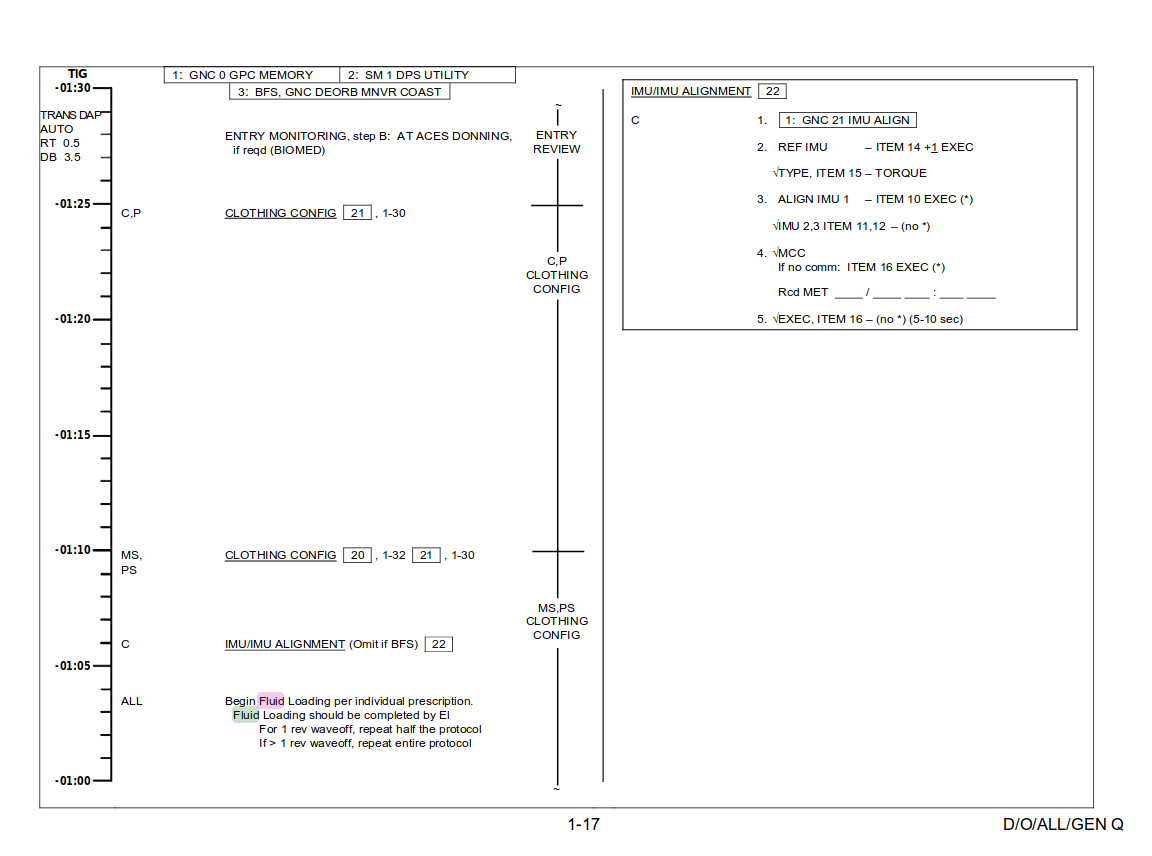 PMC - Private Medical Conference, a discussion between a crewmember and a Mission Control flight surgeon on an encrypted comm loop

TIG - Time of Ignition (for the deorbit burn)

Note: Presumably ISS astronauts have similar protocols when they return to Earth but NASA has chosen not to publish ISS Flight Rules.

Not the answer you're looking for? Browse other questions tagged iss nasa space-shuttle or ask your own question.

16
What's inside NASA N911 Shuttle Carrier Aircraft (SCA 747)?
9
What's the current timeline for NASA's Mars orbiter laser communications?
7
What's the thickness and weight of rocket tanks?
43
What's the baseball bat for? (seen in CRS-8 berthing NASA TV broadcast)
7
What are these Space Shuttle cockpit elements and what are they for?
2
What's the largest screen for watching videos on the ISS?
7
Loading tanks for supercritical oxygen and hydrogen on the launch pad, how to achieve low temperature and high pressure?
3
What's next for New Horizons?