The mean radius vector of an elliptic orbit is equivalent to the semi-major axis.
If I sample the radius vector of an unperturbed elliptic orbit as a function of the eccentric anomaly with at a constant angular step, I get exactly the semi-major axis.
Given a value of the eccentric anomaly, I need to find the corresponding time since the TLE epoch.
While the solution is trivial for an unperturbed orbit, when I use TLE + SGP4 the algorithm is very complicated and critical (at least for the heavily perturbed very low Earth orbit satellites).

1) Is there any procedure (which works with TLE + SGP4) to calculate t as a function of E?

2) With some satellites, the eccentric anomaly is the same for different times, as showed by the following graph: 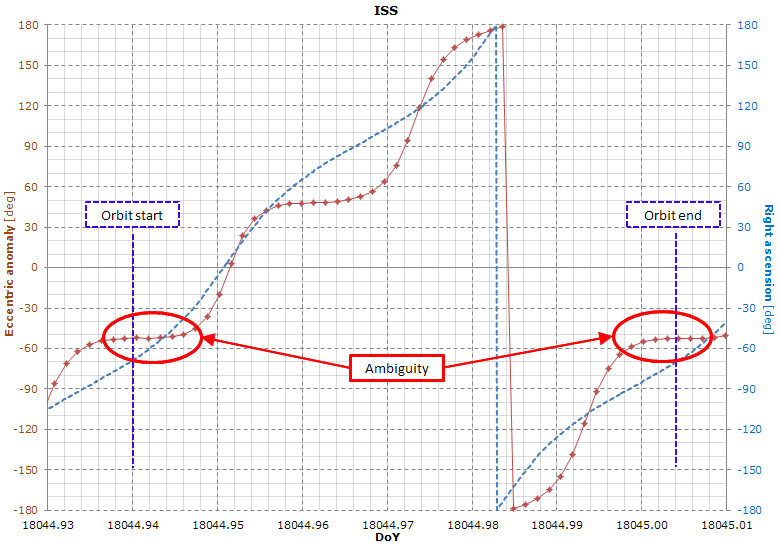 Browse other questions tagged orbital-mechanics orbital-elements sgp4 or ask your own question.

7
Calculate True Anomaly at future point in time with hyperbolic orbits
2
Relation between semi-major axis and radius of an orbit?
4
Calculating velocity state vector with orbital elements in 2D
4
How does a change in velocity affect the properties of an orbit in a 2D plane?
4
Did Tiangong-1 turn the engines on?
2
SGP4 gravity model accuracy
4
Could someone explain this formula for da/dt?
5
Do I have enough info to find the true anomaly of an orbit?
3
How can I calculate the future position of a satellite orbiting a central body as a function of time using known orbital elements?