https://ohiostate.pressbooks.pub/graphicshistory/chapter/13-4-nasa/ says that cgi was used for Apollo trainers. I just want to know the quality of this cgi.

A modern computer runs at 2560 lines on 200 gflops and 100 fps. Apollo footage is on 320 lines and 10 fps. So 640x less computation. Since a 1968 computer was 5 mflops, I think you would need about 50 of them to do realtime photorealistic rendering for Apollo.

I think your source is simply incorrect on this.

As far as I know, there was no computer generated graphics (in the modern sense of the term) in Apollo-era simulators. Motion-controlled cameras were used with models and projections to synthesize views optically -- under computer control, but not as digital renderings. EDIT: As JCRM notes, the Lunar Module Procedures Simulator (distinct from the Lunar Module Simulator) did have an "electronic image generator" which could produce crude polygon renderings.

According to Digital Apollo, the main mission simulators each:

The mission simulators were run by enormous digital computers, several for each, with extensive optical systems to synthesize views outside the windows during missions.

The "lunar mission simulator", or LMS, ran off three mainframe computers, and included five tons of glass -- lenses, mirrors, and projectors to accurately recreate the scenes of a landing. Astronauts could practice sighting landmarks, entering data into the computers, and simulate landings from about 12,000 feet to touchdown. As the pilots "flew", computer models of the LM's motions directed a small camera above a physical model of the lunar terrain, sixteen feet in diameter at 1:2000 scale ... A network of servos "flew" the camera over the diorama, right down to the point of landing.

A history of simulation technology in the space program has yet to be written, but it would show how the creation of virtual reality preceded, rather than responded to, the creation of real time computer graphics.

Here's a bit of video showing the lunar surface model and camera rig.

@Uwe notes that computer graphics pioneer Evans & Sutherland was founded in 1968; one of their first products was a vector display processor called Line Drawing System 1 and was delivered after Apollo 11 had already flown; motion-controlled camera systems would have been much more practical and higher-fidelity at the time. This is LDS-1: 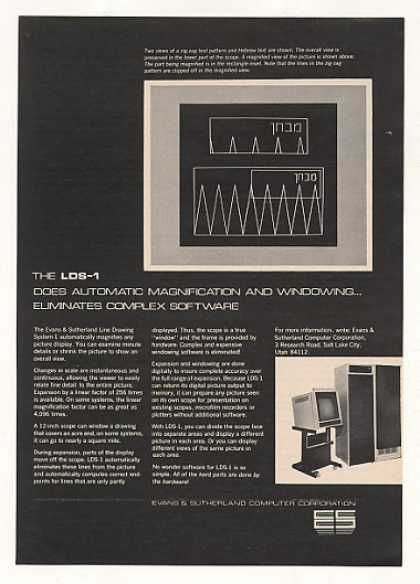 The practiced eye will discern some subtle artifacts in that rendering which distinguish it from actual Apollo footage.

There's a scene in the film Apollo 13 featuring such a camera system in the simulation of the transposition-docking-extraction maneuver, with nice cuts between the view from the sim cabin and the camera moving towards the target model. Unfortunately I can't find that particular scene on YouTube.

The NASA doc Apollo Experience Report: Simulation of Manned Space Flight for Crew Training covers the design and function of each of the different simulator systems pretty well.

Here is a lengthy description of the Apollo Mission Simulator visual systems.

It is taken from the Apollo Mission Simulator Instructor Handbook Volume 1. You will note that there is zero CGI equipment mentioned. 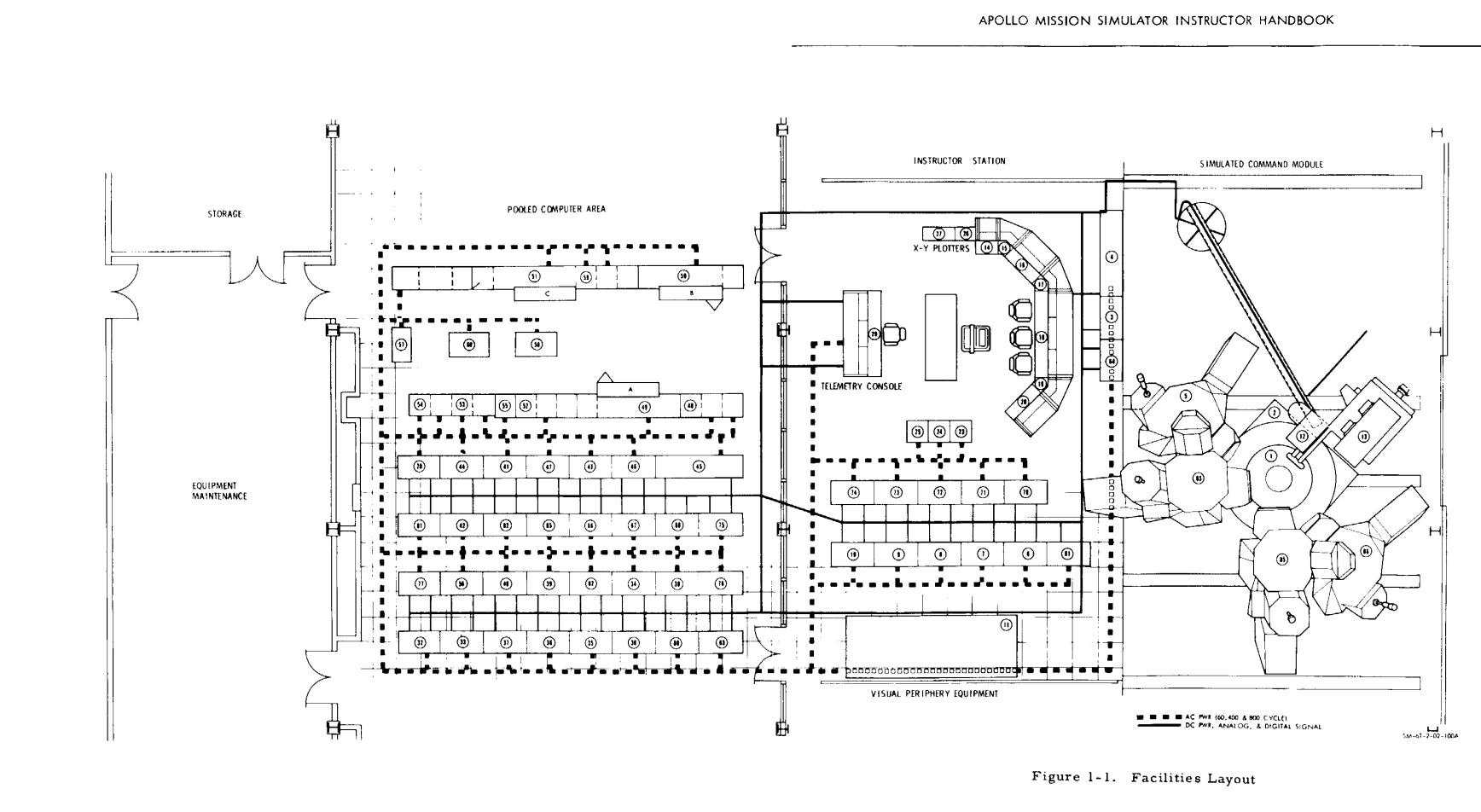 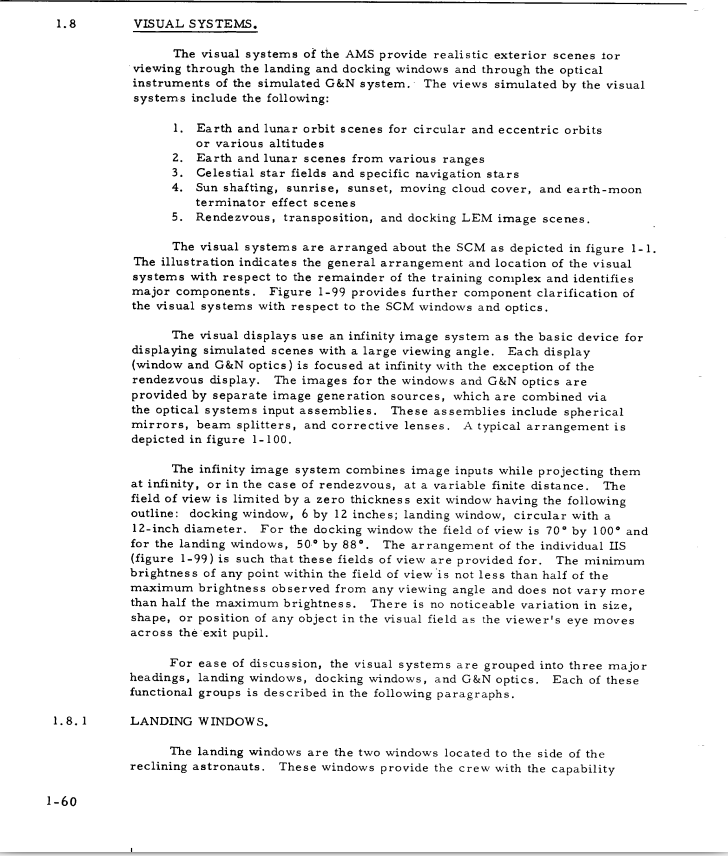 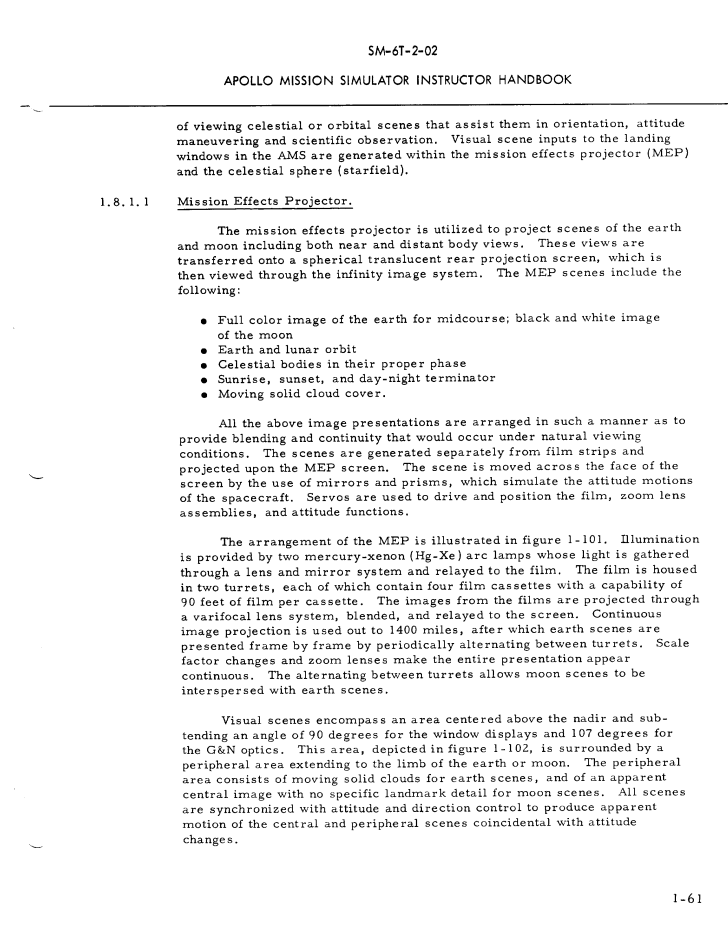 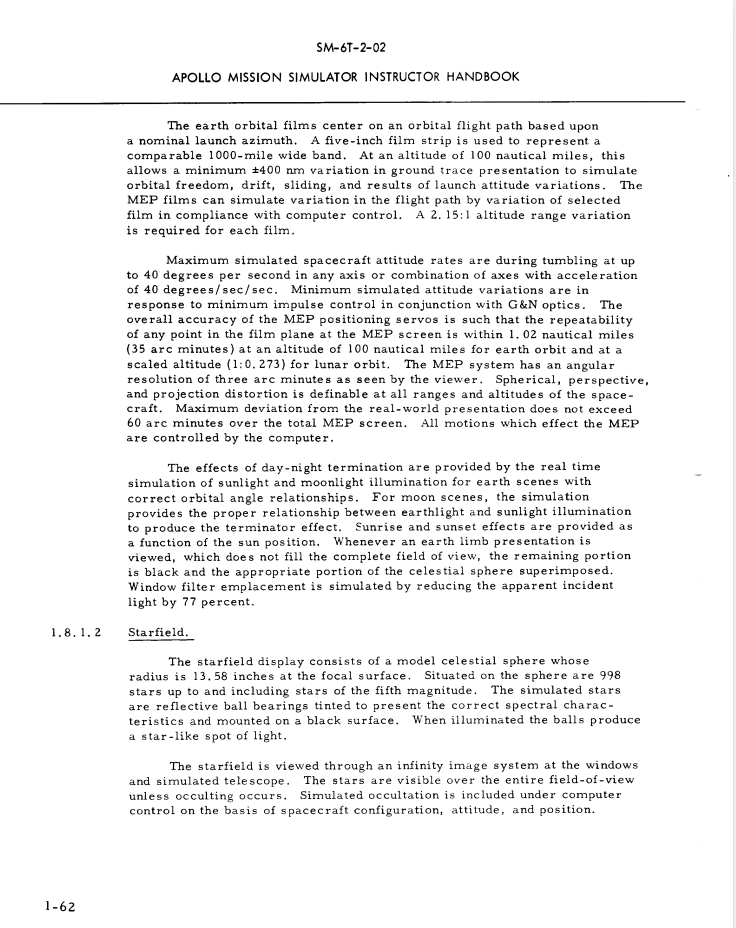 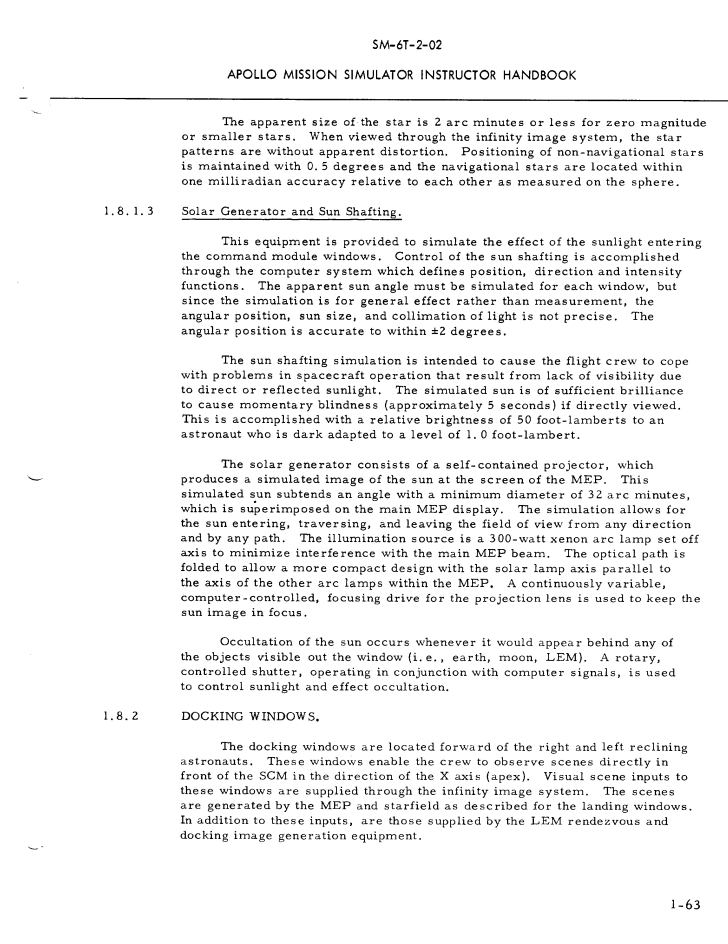 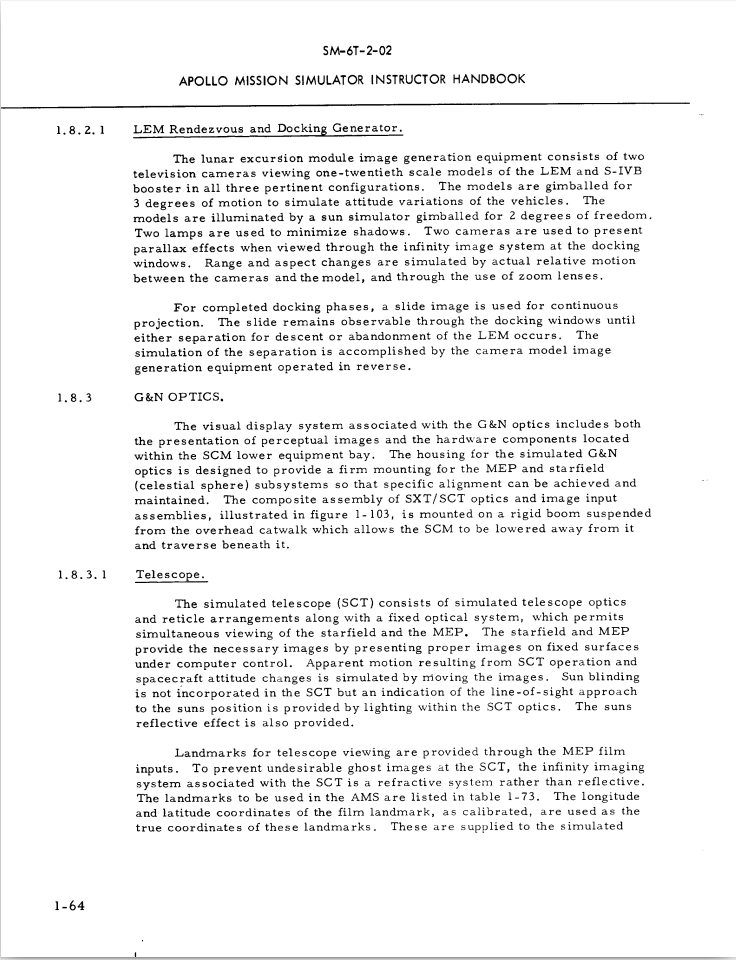 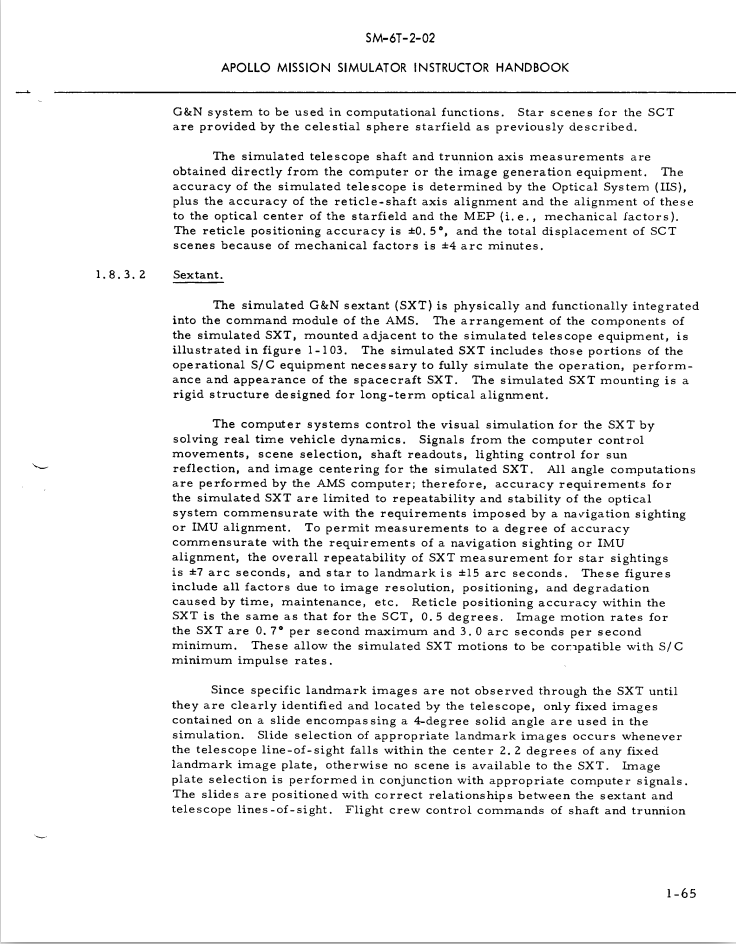 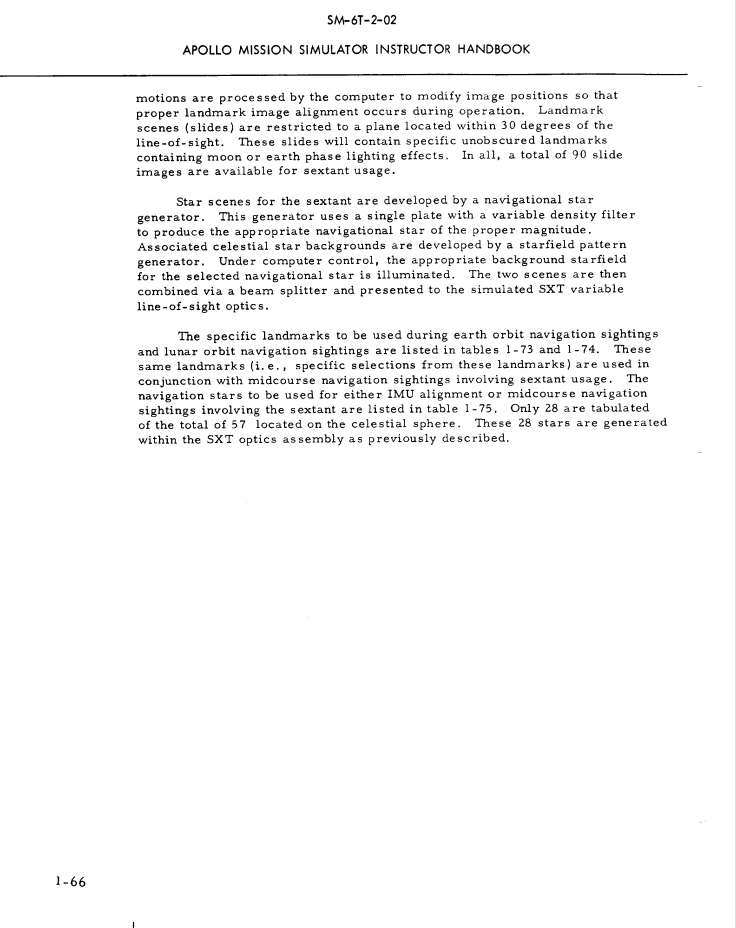 The most elaborate electronically-generated visual simulations available at the present timeare one developed for NASA in connec- tion with the lunar module (Lockwood, 1971) and the space shuttle vehicle (SSV) program, and another currently being developed for the Air Force. [...] It consists of 320 edges. Its 20 Hz. scanning rate and a 600 line raster were designed to gain spatial resolution at the expense of temporal resolution.

It is possible, but I think unlikely, the Apollo display was more capable than the Space Shuttle one

Two general techniques have been used for target-vehicle simuiation: a direct analog system of closed-circuit TV and models, and an electronically generated (drawn) image. In both systems, the input to the display system was through a CRT in the infinity optics systems. The electronic image generator (EIG) was used successfully in one of the Gemini mission simulators, in the Gemini part-task trainer, and in the LMPS. In the EIG system, the target vehicle was drawn on the face of the CRT. The outline or envelope of the target was drawn at a 60-hertz rate; however, the surface was filled in at a 15.75-kilohertz rate. The image generation contained nine degrees of freedom and produced such phenomena as line-of-sight blanking, illumination 20 shadowing, and perspective distortion. Simple target shapes (cylinders, cones, and others) as well as combinations of these shapes were readily simulated with simple surface markings and details [...] Both the TV/model and electronic- image techniques have produced satisfactory displays for stationkeeping and docking. In the EIG technique, complex shapes cannot be drawn; therefore, realism is significantly less. Conversely, the EIG is a much simpler system to maintain and operate.

To address the notion of using early (integrated circuit) transistor technology to produce a "modern" simulation, NASA's 1971 ILLIAC IV managed a staggering 50 MFLOPs on it's 64 cores, but it only had 16k memory available to each core. You'd need 14 cores just to hold the frame buffer

But let's be generous and say with 16 bit addressing it could access a full 64kB, and by some magic of massively parallel computing they can instantly share each others memory you'd need 512 ILLIAC IV's to make a 2GB graphics card. At $31 Million each, that is around three fifths of the entire Apollo budget.

Not the answer you're looking for? Browse other questions tagged apollo-program simulator or ask your own question.

16
Could the Apollo 13 crew have survived the CO2 issue using their spacesuits
39
Apollo simulator practical jokes
9
How much of the Shuttle was physically realized in the simulator?
4
Was a real Space Shuttle ever used as a really big simulator?
4
Who are these people inside Apollo Command Module (presumably posing for advertisement photoshoot)?
16
Apollo altitude vs rate-of-descent schedule
20
Were any Apollo-13-specific procedures added to standard training?
2
Is there a basic 2 or 3 body space simulator