The Apollo training program as described in this question used a computer driven system of servos and motors to move cameras over and around models. This type of simulator was common in aviation before the advent of computers, and simulator crews used to play practical jokes on pilots using them. One example that comes to mind is crews would put a spider on the model's runway during instrument training so that when the flight popped below the simulated clouds on approach they'd have a close-up of it.

Were there any practical jokes played on astronauts using the Apollo simulator, or any other spacecraft simulator?

From the book "Go Flight!", once the astronauts got an ECG (EKG) of a patient having a heart attack and fed that to the Flight Surgeon during a test run. The surgeon missed it, and was reprimanded for not noticing that the astronaut died. It helped people take training a bit more seriously.

A few others that aren't quite simulator related:

One is documented in Charlie Duke's memoir. Basically the backup crew to Apollo 17 had found and killed a large rattlesnake while the prime crew was in testing, and cut off the head. The placed the head in a lifelike manner under the desk of the prime crew's commander, Cernan.

Another part joke, part tribute, came from Apollo 1. The crew was writing the proceedures, and assigned code names to 3 stars. They used their middle names spelled backwards, Navi, Dnoces, and Regor. The terminology was kept throughout Apollo, as a tribute to the crew of Apollo 1.

I don't know if this qualifies as a practical joke or not, but at least it's semi-documented and not too in-jokey.

Food and drink was forbidden in the Shuttle Mission Simulator motion base cockpit due to potential for spillage during motion ops. The STS-86 crew had a habit of breaking this rule by taking in water bottles during training. The base operator was faced with the task of policing the crew and having to take their water bottles away. Finally it was resolved by having a member of facility management dress up as a fake cop and call the crew out to arrest them. (Notice the very large water bottle "found" in the simulator.) End of problem. 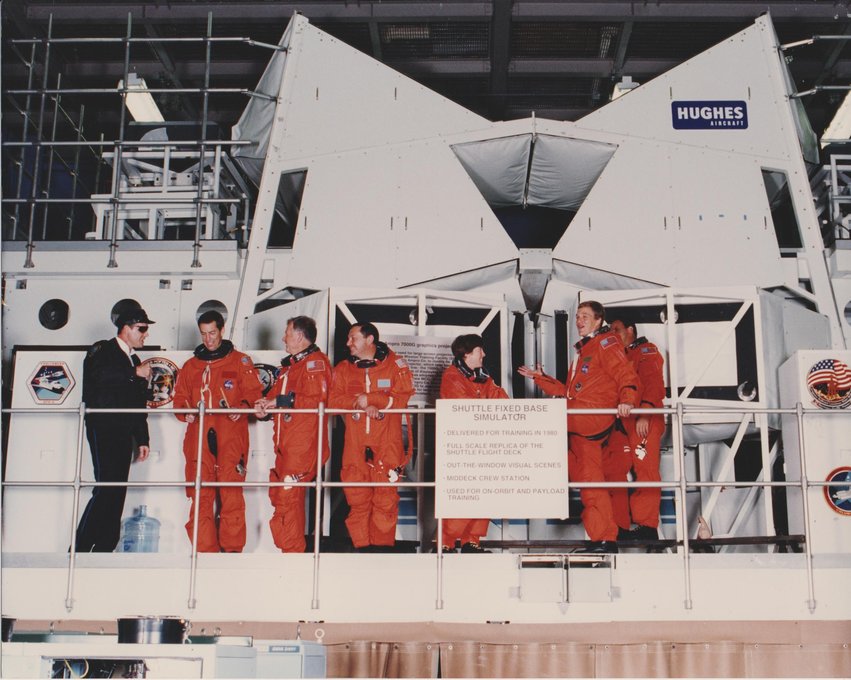 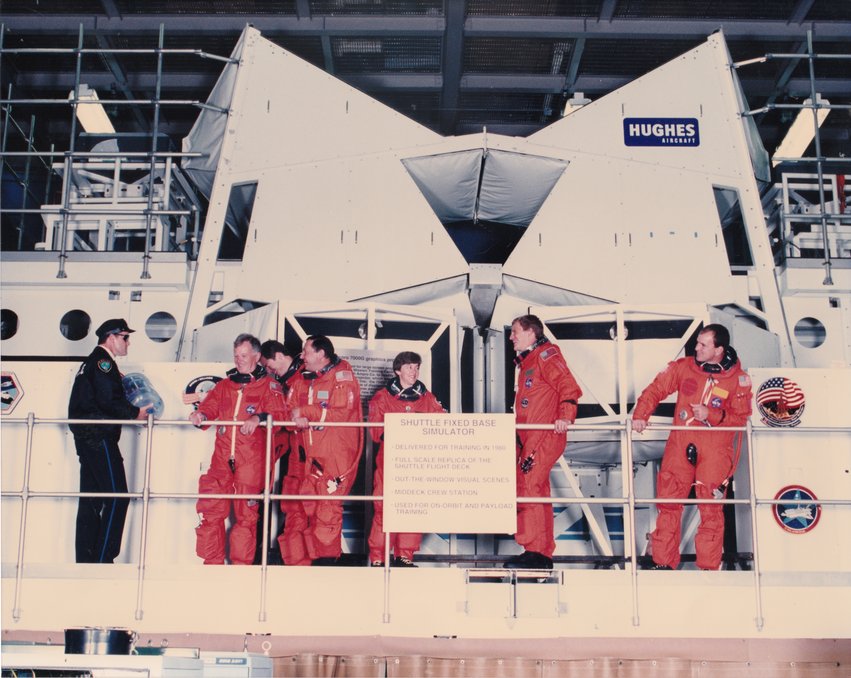 Not exactly a prank, but from an article on Ellison Onizuka:

“We were doing simulations of engine-out aborts,” Buchli said. “Most of those wound up in what we called the ‘black zone’ — the area where survivability is very sketchy. We were doing those and just about every one of them, we ended up in the Atlantic Ocean.”

“The next time we had that simulation, Ellison and I showed up with scuba masks and a set of fins,” Buchli continued. “You keep things in perspective, and when you can, you keep your training even keel with some humor.”

I can't seem to find the video of it anymore, but at a talk back in (I believe) 2012, STS-135 commander Chris Ferguson described a story from one of his last mission simulator runs.

For this particular sim, his crew went behind his back and coordinated with the SimSups to find out everything that was going to be thrown at them ahead of time. Throughout the sim, he remarked at how well his crew was able to rapidly respond to all the anomalies thrown their way.

Where it came to a head, however, was when they simulated their final approach and landing. The simulation called for a last minute communication dropout due to a fire at the since-closed Merritt Island Spaceflight Tracking and Data Network station, commonly known as MILA (Merritt Island Launch Annex). Within the simulation, it was only possible to indicate this to the crew as a loss in communication -- the out-the-window view wasn't able to show anything.

As Pilot Doug Hurley was piloting the simulated Atlantis around the Heading Alignment Cone, however, he looked out the window to his right and said, "Huh, MILA's on fire!"

Commander Ferguson was caught on the simulator cameras looking out the window, only to see exactly what the simulator was able to produce -- nothing out of the ordinary.

It was only after wheels stop that communication with MCC was reestablished, in which they confirmed a fire at MILA, completing the joke.

This sim run was famous enough that it earned a place on the post-flight hall decorations. 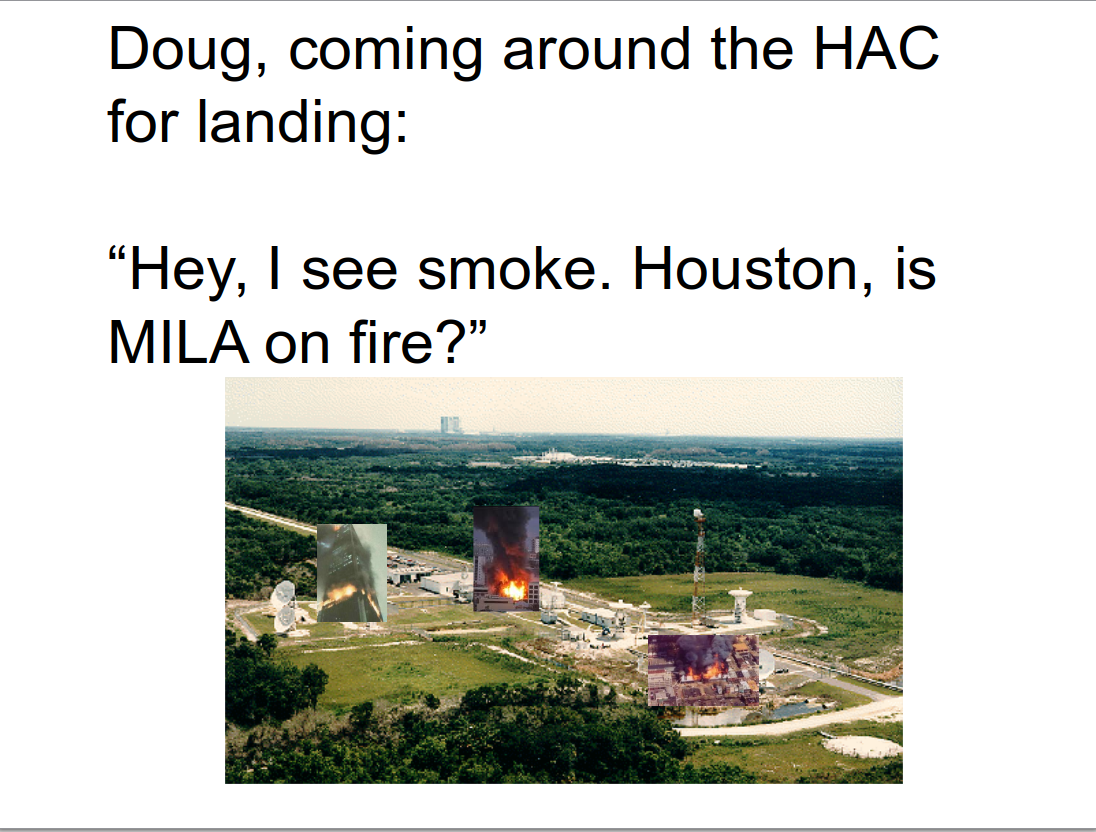 Not the answer you're looking for?Browse other questions tagged apollo-program training simulator or ask your own question.

16
Is 678 km the new altitude record for a rocket shot “straight up” (vertical launch)?
12
Apollo training simulator cgi requirements
12
Do ISS astronauts notice, or experience symptoms of elevated CO2 levels? Do they wear monitors regularly?
5
Did the NASA PhoneSat actually try to use the GPS from the phone itself?

21
How did the Apollo astronauts train for the 1/6G lunar landing?
12
How many seconds of near-zero gravity are practical with a Reduced Gravity Aircraft?
5
What documentation remains from Apollo?
16
Was there any “practical” advantage to having different crews for each Apollo landing?
0
CSM velocity / apollo program
12
Apollo training simulator cgi requirements
4
Was a real Space Shuttle ever used as a really big simulator?