How does the ISS Transit Finder website get the position of the ISS so accurately?

The recent Petapixel article How to Shoot the ISS Flying Across the Face of the Moon gives a lot of detailed, helpful advice for photographing transits of the ISS across the disk of the Moon.

For transit predictions, it recommends the web site https://transit-finder.com/

The regular publicly available TLEs are known to have some error, I've heard values like 5 or 7 km but of course it will depend on the details. Along-track errors would result in timing shifts of the order of 1 second, but cross-track errors would easily cause a complete miss, which really means you end up sitting several kilometers away from where you should have been to photograph the transit.

However, the example photograph shows a cross-track error of roughly a few hundred meters at most! The path of the visible transit across the UK is shown in a map in the article, where you can see it is only a few km wide.

Question: Is it known if this web site just blindly uses whatever the most recent TLE is from CelesTrak, or does it do a more intelligent job of interpreting several of the most recent TLEs along with some fitting or custom propagation, or perhaps uses some other publicly available ISS finding software?

below: From here, photo credit should be Mathew Browne (author). "The photo you see here is a composite of 22 consecutive frames illustrating the movement of the ISS across the face of the moon." 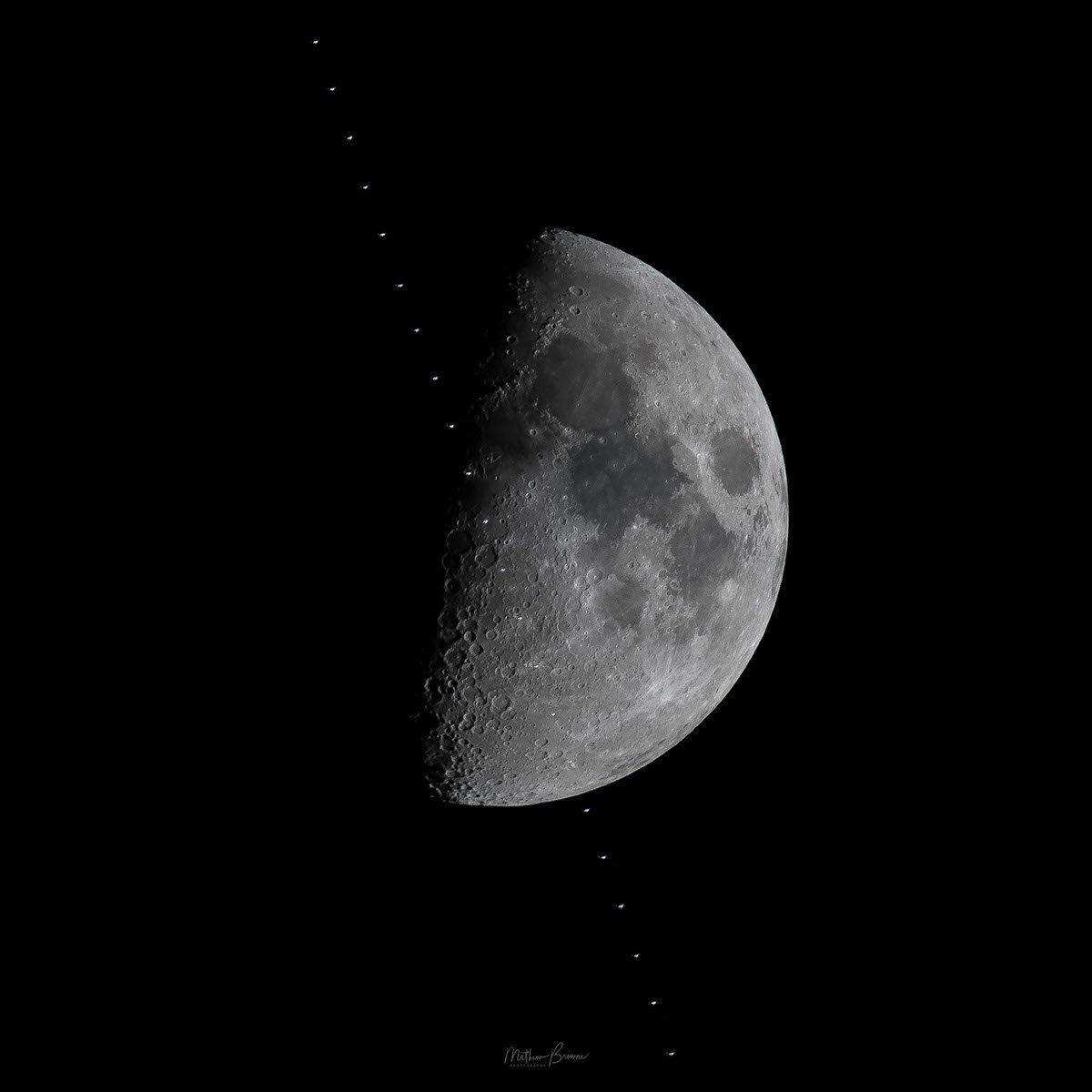 A typical TLE for a maintained satellite (as opposed to debris tracked via ground assets) has an error of only around 1 km at epoch (Vallado, et al, Appendix B), which grows at a rate of around 1-3 km per day. Worst case, a 1 km cross-track deviation from a distance of 400 km (approximate distance to ISS for a zenith pass) gives a deviation of only 0.143 degrees from the nominal path. This is only 30% of the lunar diameter. In reality though, the 1 km error is the total error in all directions, so a more realistic expectation of the cross track error would be $\sqrt{\frac{1}{3}} \approx 0.577$ km, for an angular deviation of about 0.083 degrees.

Not the answer you're looking for? Browse other questions tagged orbital-mechanics iss the-moon photography two-line-elements or ask your own question.

9
Why did the frequency of TLEs for the Hubble Space Telescope drop by a factor of 3 in 2009?
3
Onboard propagator in satellites SGP or J2
3
What are the chances that the ISS transits the moon as seen from your house (or headquarters)?
1
Distance between GRACE-FO 1 and 2
1
Calculation of collision probability based on TLE

7
How much power loss does the LLCD suffer in transit?
5
Position of shuttle viz iss
16
How long does it take to get to ISS?
1
Why does the ISS use longitude and latitude to specify its position?
13
How do astronauts take pictures from outside the ISS?
8
Does ISS get a surplus of oxygen or water?
4
How does SpaceX's Dragon get to the ISS?