Why doesn't SpaceX deploy some module to cover whole fairing like a rain coat just before sea landing? [duplicate]

In order to avoid fairing to get wet in water, why can't SpaceX just deploy something such that when fairings separate from the Falcon 9 then from inside some raincoat type waterproofing to just cover the whole fairing and let it fall on the water.

Then it would not need to have a boat like Mr Steven. Would that be a simpler, cheaper solution?

As according to last two launches there is enough additional space left for adding any small stuff, the weight of adding the material to cover the whole fairing must be addable in that range I think, so overall there will be no cost for extra fueling or something. The only cost for SpaceX will be to build this material which will be very cheap. Also a nose cone costs around $6M, and the material cost will be very cheaper than that cost. Also when SpaceX will be able to catch the fairings then they can stop adding this module, but currently as they are losing money. Why not use an approach like this?

Note: The question Why can't Falcon 9 fairings touch the water? answers the why. My question is about a method to prevent that.

The goal of a fairing is to make it as light as possible. The design they have chosen is most definitely not waterproof. There is a sandwich of aluminium and composites, which water getting in between is quite bad. Perhaps they could try waterproofing that area.

But the biggest reason is weight. The more complex you make it, the more you add to it, the heavier it gets, and the more it eats into your payload.

Now SpaceX is clearly willing trade performance for reuse, after all an ASDS downrange landing or RTLS landing eats between 15-30% of the payload possible on a fully expended mission.

Others have noted that as soon as a fairing gets wet, even if it is waterproof, there is salt residue that can be left behind that needs to be cleaned off. This adds to recovery cost as well as it is likely never as simple as hose it down, when it comes to aerospace equipment. Remember that upon use, this fairing encloses a very sensitive payload that is likely not happy with any contamination.

Additionally, while water contamination is a problem, the impact on the water is sufficient to damage the fairing, regardless of how intact it looks in pictures.

A parachute landing while 'slow' compared to orbital speeds, is NOT slow, when considering a large (School bus sized), not very stiff composite structure hits the water, it is way too fast.

Thus Mr. Steven includes a large net, with a very large amount of 'spring' in it.

You can see in this image, where a fairing is dropped into the net for testing, while on shore. 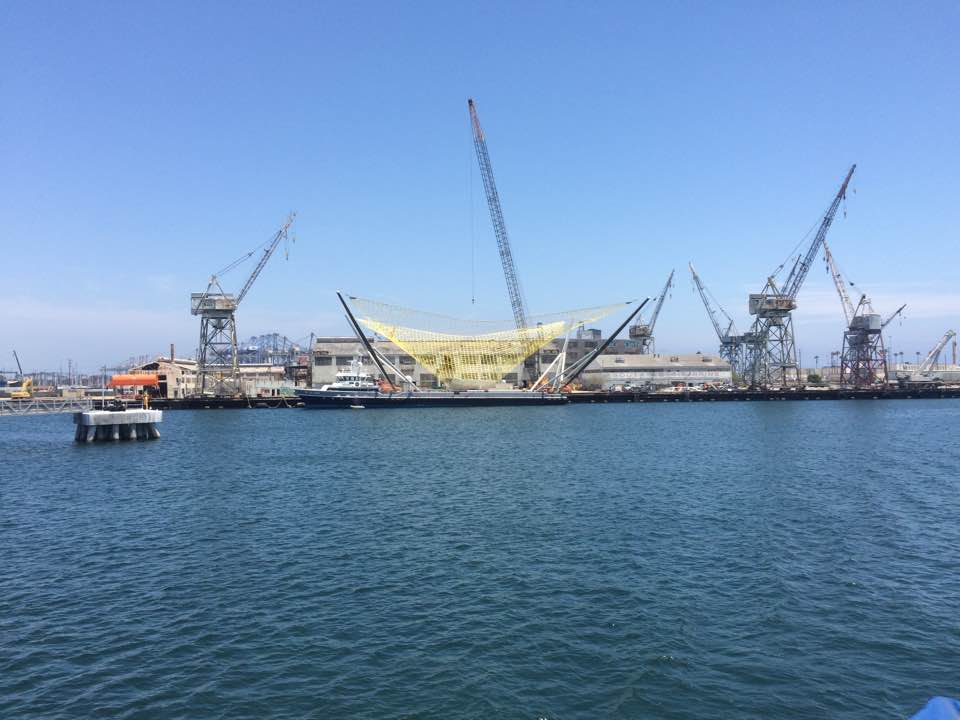 Not the answer you're looking for? Browse other questions tagged spacex falcon-9 landing fairings or ask your own question.

8
What difficulties will be faced modifying the Falcon 9 FT, so to have better and easier landings of the 1st stage from a GTO mission?
16
How strong and "hot" is the wind on the payload after the fairing is deployed at ~110km?
14
Why can Falcon Heavy bring 4.2 times as much mass to Mars than F9, but only 2.7 times as much to LEO?
7
How much does a current F9 fairing-half weigh?
7
How does SpaceX decide which half of the Falcon 9 fairing to catch?
26
Why aren't payloads their own fairings?
44
Why can't Falcon 9 fairings touch the water?
25
How will SpaceX Starship deploy its payload?
17
Reusable spacecraft: why still have fairings detach, instead of open/close?