I am trying to simulate a rocket launch.

I can simulate some forces applied to the rocket (such as weight, thrust and drag).
I can then compute the acceleration and then the speed and finally update the position.

I use 2 angles, one for the direction of the path the rocket is actually following and the other one need to be the angle of attack.

Given the forces, how can I compute the angle of attack which the rocket shall have so as to follow a straight line from P1 to P2? 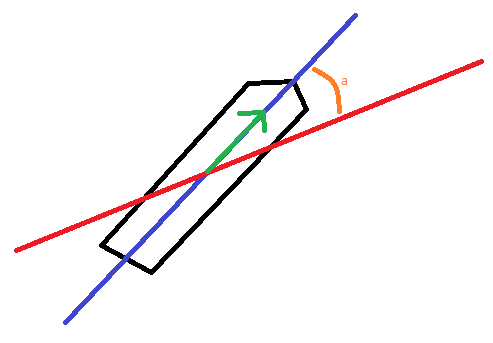 For example I can extract the following equation:

For example $engine_x$ is the component of the engine's power in the horizontal axis. And so on.

I need one more equation in order to solve them together and find $engine_x$ and $engine_y$.

If this equation is wrong then correct me. I just need those equations.

For example maybe the second equation can be like:

Because I know the power of the engine, then I can compute $engine_x$ and $engine_y$ and the angle of attack might then be their arctangent.

For a realistically shaped rocket travelling at any significant speed, the drag will depend heavily on the angle of attack, in both strength and direction, so you will need to take that into account.

So let $\theta$ be the angle between your red line and the horizontal. The gravitational force perpendicular to the line is then $Mg\cos(\theta)$ ($M$ the mass of the rocket). The trust in the other direction perpendicular to that line is $T\sin(a)$ ($T$ the thrust of the engine) so your equation is $$a = \sin^{-1}\left(Mg\cos(\theta)\over T\right)$$

lift on the rocket is dependant on angle a and velocity and the vehicle design. calculating it is non-trivial across the range of subsonic, transonic, supersonic and hypersonic regimes.

The force due to gravity is $Mg$, but you only need the component of that acting perpendicular to the direction of travel.

Subtract this from your calculated value for lift (lift works upwards, gravity downwards) to get the net force causing you to deviate from $\tiny{\overrightarrow{P1 P2}}$. This gives you the force your engine needs to exert to remain on course.

The problem here, unfortunately, is as $a$ changes, so the calculated for $l$ changes, so it's very difficult to work it out. If $\tiny\left(\frac{l-w}{T}\right)$ is ever greater than 1, this means the force you need to keep the rocket on course is greater than its engine can provide, so you aren't going to reach your destination.

13
Which currently operational orbital launch vehicle achieves highest system-specific impulse?
5
Are cold gas thrusters viable for model rockets?
1
Angle of attack, or displacement angle?
2
Stability of rocket during flight; why does the lift force change direction when the center of pressure moves?
0
How much anti-matter is needed for an anti-matter propelled rocket to reach $P$ % ($P\lt{100}$) of the speed of light (c)?
3
Simplified rocket lateral dynamics model sign convention
1
Lift and Drag of a Model Rocket