Why do the LAGEOS' satellites have four germanium corner cube reflectors out of over 400?

When I was writing this answer about the LAGEOS satellites, I noticed that only four of the over four hundred corner reflectors are made of optical germanium rather than fused silica.

Fused silica (FS) is transparent to some wavelengths in the infrared (neighborhood of 3 or 4-ish microns), but it's limited. For a wider transparency window, especially at longer wavelengths, optical-grad silicon or germanium is used (e.g. FLIR cameras). Also, there are likely to be antireflection coatings which further limits the use of the FS elements away from their optimized wavelength range.

This was probably done "just in case" someone would like to try IR, and it's good thinking, but I'm still wondering why these four cubes were added. Are there even any lasers at long enough wavelengths for germanium to be transparent that can also be pulsed short enough to get useful distance information?

So far I can't imagine how these could be used under any circumstance.

This is a companion question to Have LAGEOS' germanium corner cube reflectors ever been used?

below: Sample output from JPL Horizons. 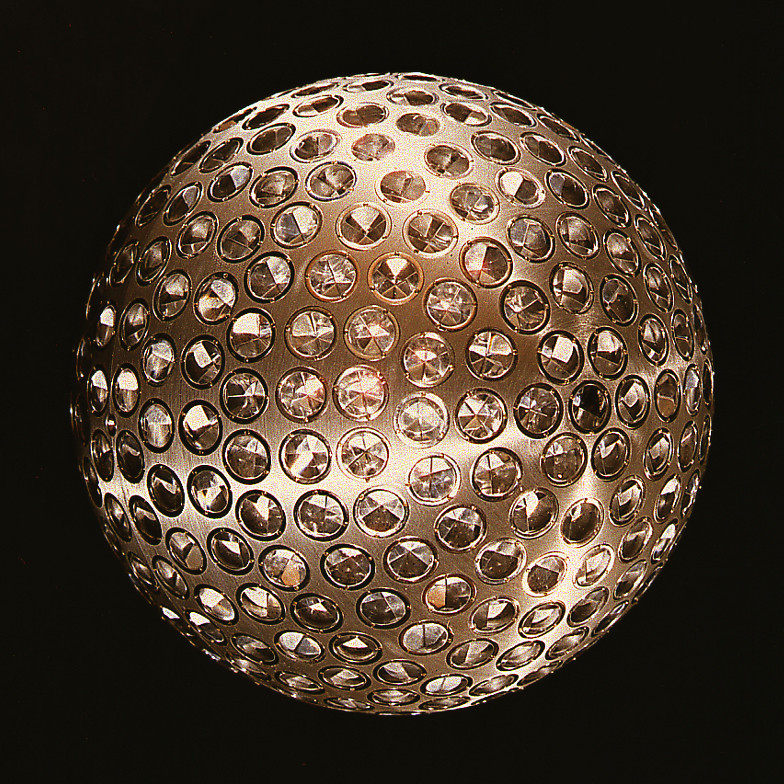 D.A. Arnold "Optical and Infrared Transfer Function of the Lageos Retroreflector Array", 1978, NGR 09-015-002 (P179) confirms that they're for infrared measurements, and adds some interesting info:

The infrared array carried by the Lageos satellite was designed to provide coverage from any direction of illumination with a minimum of interference between the reflections from the different cube corners. Germanium was chose (sic) for the material because its high index of refraction gives each cube corner a very large viewing angle so that only a small number of reflectors is required. The material has the disadvantage that it become opaque at around 100C, which occurs if the cube corner facts the sun. An accurate range correction to the center of the satellite requires knowing the orientation of the satellite. In principle, the orientation can be determined from the infrared data.

It turns out that LAGEOS tracking is so incredibly accurate that having disparate reflectors caused some controversy over whether they were causing small anomalous offsets in the measured orbit. Two useful references:

and that in turn might be or not be (depending on the paper you read) the reason for the anomalies.

With $\Delta p$ ~ 􏰁0.015 and $\thera_r$ ~ 90°, both appropriate for the initial 20 years of LAGEOS (Figure 1), the asymmetric reflectivity is basically an acceleration along the spacecraft spin axis with magnitude of 12 pm/s2. It should be pointed out that the primary need to introduce the asymmetric reflectivity for LAGEOS orbits is to fit the anomalous along-track signal, where it contributes equally (or more) as the Yarkovsky - Schach effect during the periods when the satellite orbit enters the Earth’s shadow. Though not entirely negligible, the asymmetric reflectivity contribution to the eccentricity vector excitation is minor, about an order of magnitude smaller than the signal produced by the Yarkovsky-Schach effect and a slight net recalibration of the surface reflectivity [Metris et al., 1997].

Most LAGEOS tracking is done by the member stations of the International Laser Ranging Service. Most, perhaps all those stations measure with 532nm green lasers. Although many of them use 1064nm IR light to create the 532, I don't know of any that use the IR light for measurements.

Not the answer you're looking for? Browse other questions tagged earth-observation measurement optical retroreflector or ask your own question.

7
Have LAGEOS' germanium corner cube reflectors ever been used?

36
Is photography from a satellite good enough to make out a person on the ground?
12
Which high-resolution Earth-facing satellites transmit data to the public in realtime?
17
Minimum number of satellites to image the entirety of Earth's surface at all times
1
Could Schiaparelli's retroreflector array (still) be used?
4
Why does MODIS have two channels covering a band of 3929nm to 3989nm?
3
Why does the Earth's atmosphere as seen from space have the colors that it does?
8
Why does Himawari-8 have problems with the Sun from 19th February to 19th April?