At what point was nose wheel steering "added" to the Space Shuttle design?

A comment below this answer to my question "Runway landing with a front skid instead of wheel - how does steering happen? (Dreamchaser)" says:

In fact, the Space Shuttle didn't originally have nosewheel steering. It was added after brake damage incidents.

If this is so, at what point in the Shuttle's development, testing, and extensive flight history did this happen? It seems like adding a complete, reliable nose wheel steering system to a mature design would be quite an undertaking.

That comment is incomplete, the first two Orbiters (Columbia and Challenger) always had a nosewheel steering system (NWS)...but it was only used for the first 4 missions, and got turned off for years due to the problems discussed below.

The original system was inadequate: it was zero-fault tolerant for loss of hydraulic pressure, for one thing. It was redesigned after the Challenger failure (as were many of the Orbiter systems, including the brakes) to remove inadequacies in its design.

A diagram of the original system can be found in the 1982 press manual. 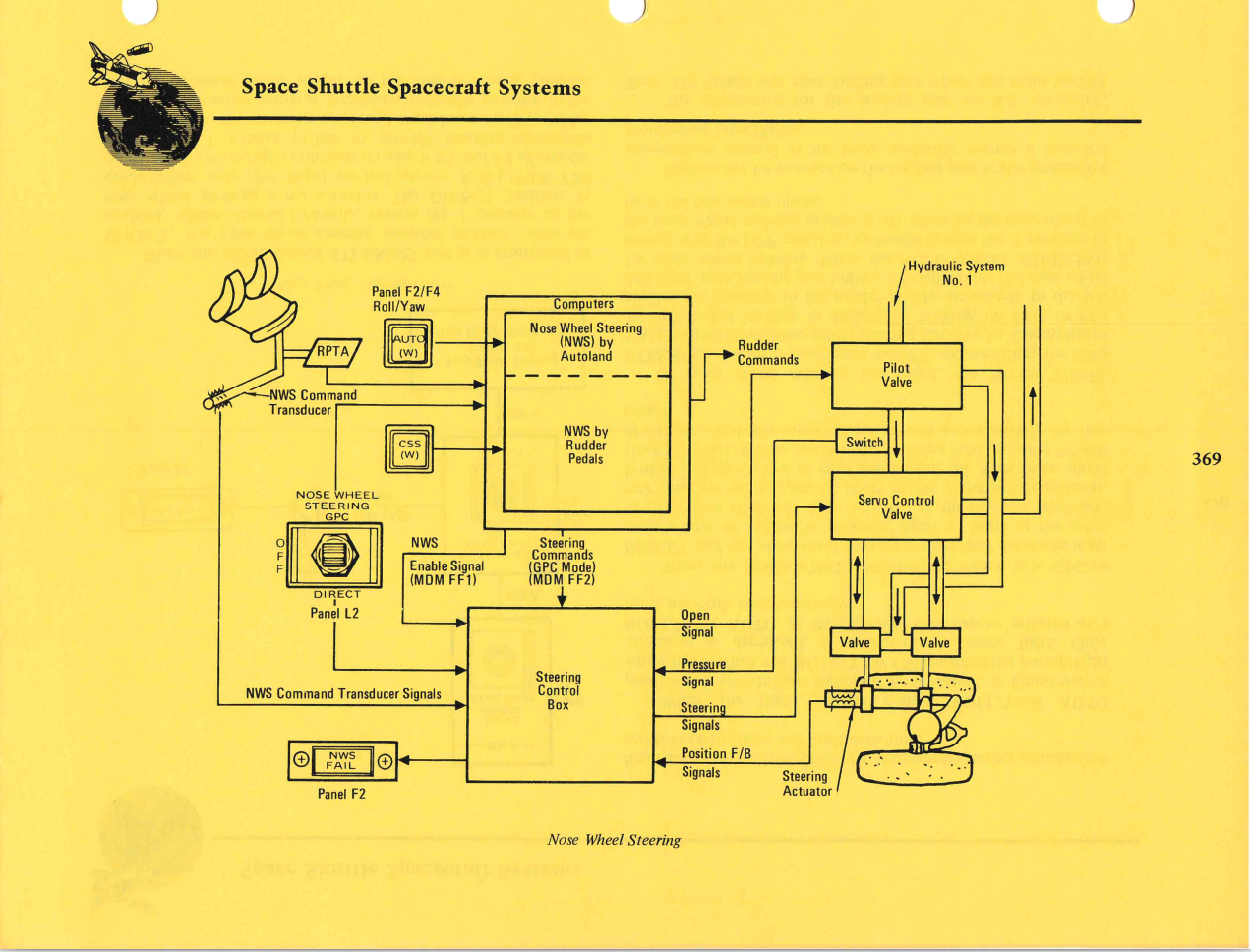 The text-only version of the 1988 update to the press manual has a terse description of the modifications:

The nose wheel steering system was modified on Columbia (OV-102) for the 61-C mission, and Discovery (OV-103) and Atlantis (OV-104) are being similarly modified before their return to flight. The modification allows a safe high-speed engagement of the nose wheel steering system and provides positive lateral directional control of the orbiter during rollout in the presence of high crosswinds and blown tires.

Summarizing the next paragraph from Jenkins:

Thanks to David Statezni for pointing out that the original version of this answer was incomplete and prompting me to do this revision, in his answers here and here.

The Shuttle Crew Operations Manual gives a schematic of the upgraded system showing the addition of Hydraulic System 2 for redundancy. You can see from the diagram that this had the added bonus of providing hydraulic redundancy for nose gear deploy. (The main gear was only deployed by hydraulic system 1, and had a pyrotechnic backup release system).

The "Direct" mode of the system - which put the system in a non-fly-by-wire mode and controlled the steering directly from the rudder pedals - was removed and replaced by a redundant avionics system. You can see in the yellow picture above that the original NWS switch gave the commander a choice of GPC/Direct/Off (where GPC is the computer-supported mode). The picture below shows the switch to control the upgraded system, where the choices are System 1/System 2/Off. 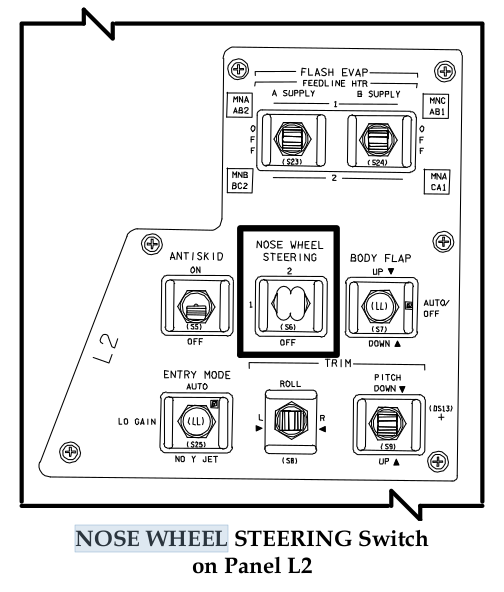 The linked manuals have extensive descriptions of the original and upgraded system should you wish further reading.

Facts are facts, thanks @organic-marble for sharing those. It’s always good to get a new dose of those. What is very interesting on this is that there was no nose wheel steering during ALT flights on the Enterprise, just differential braking. Before working for Rockwell on the BFS SW, I worked at Rockwell for Honeywell. In Downey, HI was doing the analysis of the ALT Control laws for slapdown/rollout. I was just the Engineering Assistant who would modify the card decks and submit the jobs from directions given by the Analysis Engineers. To be able to do the full analysis, everything had to be done in Autoland mode, no crew members hiding in the cards of the card decks (teehee). Those engineers had to create some control laws for the non-existing nose wheel steering system. These informal requirements never made it into the ALT flight software, since the Enterprise was never equipped with that HW capability. I know this fact, also, about the SW, from at least the ALT BFS standpoint, because I changed companies from Honeywell to Rockwell before the first ALT flight and there were no nose wheel steering requirements for the BFS to implement.

What else seems odd is that, as you showed, there was a form of nose wheel steering incorporated on the Columbia, OV-102, for its first few flights. (Since I’m not familiar with the assembly schedules of the other vehicles, were they or were they not delivered with this initial nose wheel steering system?) An odd part about this was that the SW for accomplishing that feature for those first few flights was not implemented in the BFCS. They may have assumed that if the BFS had to be engaged for one of those flights, the crew could use differential braking to steer down the runway as they had done in ALT days. It might be interesting to uncover the details of the deficiencies of that first system, both HW and SW. That data was probably re-evaluated at the redesign during the down-time after the incident. Another interesting question is whether crew training prior to STS-1 was with this initial nose wheel or did that training use differential braking?

Neither of these answers were correct. I worked on the Shuttle SW. The crew had to use differential braking from ALT-12 through STS-61-C, the last mission before the incident. It was during those 2 1/2 years with no flights that NASA did a lot of work on redundancy, making most, if not all, of the redundant signals quad-redundant. NASA also took that time to add Nosewheel steering. I was part of the BFS software team that added the logic and I/O to accomplish that. Sorry, that steering didn’t exist until STS-26, the first flight after the incident.