How do space suits offer heat protection i.e. during the lunar day?

I didn't know that during lunar day temperature is up to +100°C.

This would mean US astronauts were rather to protect against heat than cold? How was this solved (normally, space suits protect from cold, not heat)?

I didn't know that during lunar day temperature is up to +100°C.

The insulated boots and overshoes are examples of passive thermal control. Another set of examples are the very white space suits the astronauts wore while performing an EVA and the insulation inside those suits. Sunlight is considerably more intense on the Moon than it is on the surface of the Earth due to the Moon's lack of an atmosphere; it represents a much greater thermal threat than does the Moon's surface. The space suits were made to be white to combat this threat. Even with this, the inside of the side of the space suit facing the Sun could become very hot, while the inside of the side of the space suit shadowed from the Sun could become very cold. To combat this, the space suits had multiple layers of insulation between the outer shell and the human within.

This would mean US astronauts were rather to protect against heat than cold? How was this solved (normally, space suits protect from cold, not heat)?

Space suits do not normally protect from cold. A widely stated but completely incorrect statement is that space is cold. Near-Earth space is not that cold. The side of an object in space that faces the Sun experiences much worse warming from the Sun than the same object would experience in the Sahari. The side of that object in space that faces away from the Sun will cool due to thermal radiation, but thermal radiation is a rather inefficient cooling mechanism.

The insulation in an astronaut's space suit means that astronauts are made somewhat immune to radiational heating from the Sun and radiational cooling to empty space. They are not immune to internal heat buildup due to heat produced by an astronaut's metabolism or by the life support system that sustains the astronaut while on EVA. Getting rid of this heat is the key remaining challenge in space suit design.

The Apollo space suits did this via a sublimator, a mechanical device similar to how sweating cools the human body. This required about 4 liters of water per Apollo astronaut per day, making that water a significant consumable.

The astronauts wore a cooling undergarment called a union suit. It consisted of:

a network of flexible tubes embedded in a mesh fabric, this water-cooled underwear is linked to the vital backpack portable life support system (PLSS) where the water and oxygen are stored and metered for precise circulation. The cooling is necessary because body heat cannot dissipate adequately

Following is a picture of such a cooling undergarment. 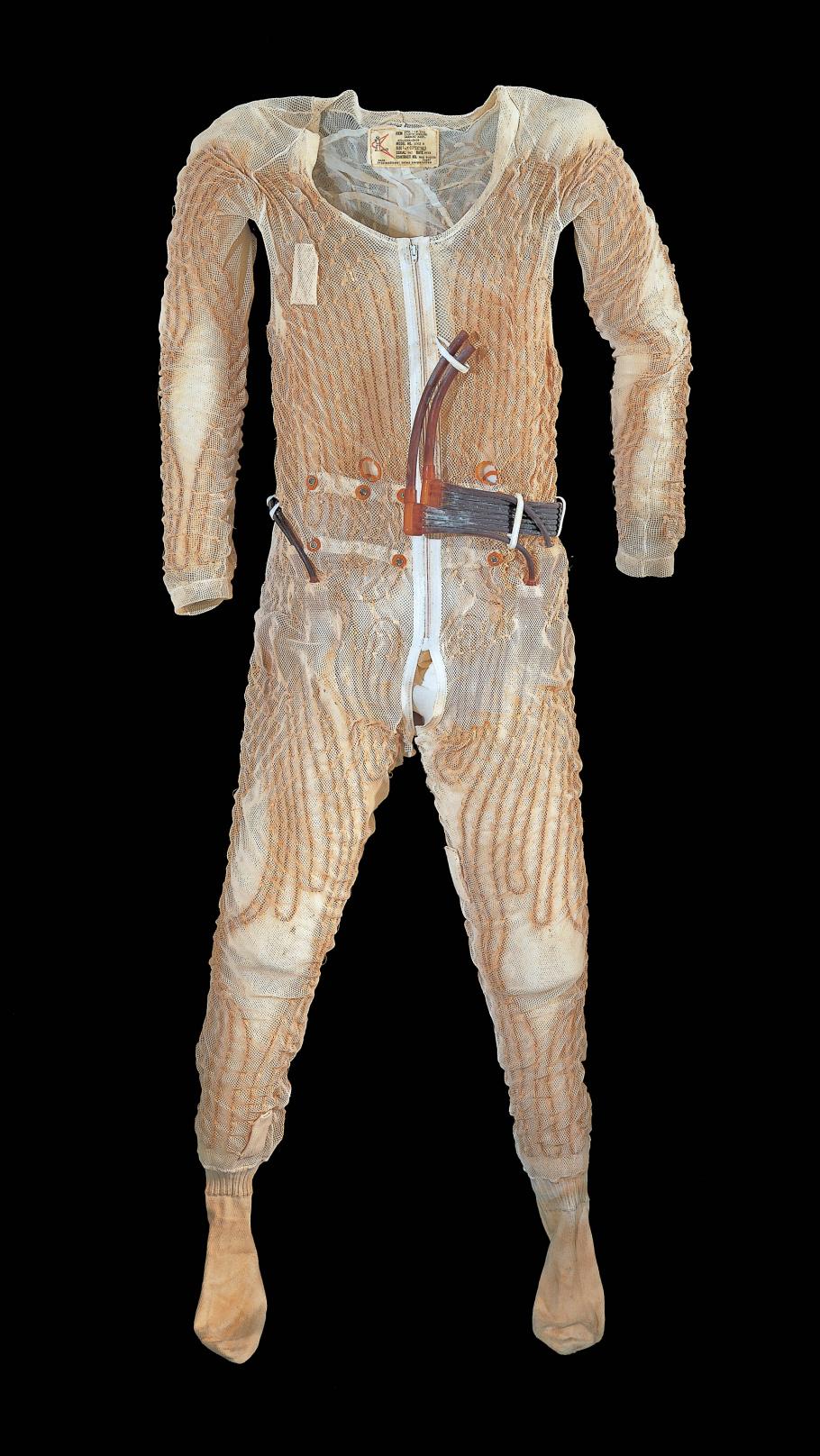 That is not true. There are three ways to get rid of heat:

In space, nothing is touching you and there is no air, which leaves only radiation, and that is really inefficient. That's why satellites and the ISS have those large radiators to get rid of the excess heat.

Without temperature regulation in the spacesuit, you would cook, not freeze to death.

So, on the lunar surface, you just need a bit larger cooling system than you already have.

Not the answer you're looking for? Browse other questions tagged the-moon spacesuits or ask your own question.

0
Lunar module on the moon
10
How have space suits dissipated the heat removed from astronauts?

26
How was dust-mitigation addressed during the Apollo program?
15
Why didn't Apollo land on the Lunar poles?
10
How have space suits dissipated the heat removed from astronauts?
27
What does "double vacuum pressure" mean in space-suit testing?
4
Why were EVA suits never silver?
7
How were Apollo spacesuits cooled during simulations/rehearsals on Earth?
7
Do any spacesuit designs (including prototypes, conceptual, etc) use radiators rather than open-loop cooling?
7
How many current or near-future pressure suits are there for use in space in total?