I was wondering, are the comets 67P/Churyumov-Gerasimenko and 103P/Hartley 2 the only Kuiper Belt comets to date that have their water D/H (deuterium-to-hydrogen) ratio measured?

I was wondering, are the comets 67P/Churyumov-Gerasimenko and 103P/Hartley 2 the only Kuiper Belt comets to date that have their water D/H ratio measured?

Have we determined the water D/H ratio of any other comet originating from the Kuiper Belt? I ask as I'm trying to assess the likelihood that Kuiper Belt comets provided the main source of delivery of Earth's water.

Yes, after hours of searching I found one study of D/H ratios in other comets, but they are all one side of the D/H line (unlike asteroids, so even mixing of different comets would not match Earth's ratio).

See the graphic below.

NASA's webpage on the Herschel Space Observatory explains that it is believed that most Kuiper belt comets where thrown outward with few traveling to the innermost planets.

When Jupiter, Saturn, Uranus, and Neptune condensed out of the solar system's parent nebula some 4.6 billion years ago, there were millions of bits and pieces left over - the comets.

A region of comets lying beyond Neptune's orbit has remained fairly undisturbed since then. It is known as the Kuiper Belt, and it's the source of short-period comets like Halley.

But theory holds that the comets scattered among the giant planets were relocated - drawn to and then flung away by the planets' gravitational pull. (NASA has made good use of this "slingshot effect" to give spacecraft a boost on their way to the outer planets.)

Some of the comets are thought to have headed sunward and collided with the inner planets. In fact, one school of thought has it that these comets provided the water for Earth's oceans, and may also have contributed the complex organic molecules that led to life.

See also ESA's webpage: "The cosmic water trail uncovered by Herschel" (Sep 19 2017), and it's brief mention of Jupiter-Family comet (45P/Honda-Mrkos-Pajdušáková) with Earth-like water. With a aphelion of 5.511 AU it orbits near Jupiter but far short of the Kuiper belt (30 to 50 AU).

The Rosetta mission is described on ESA's webpage: "Rosetta fuels debate on origin of Earth's oceans" (Dec 10 2014), and provides this graphic: 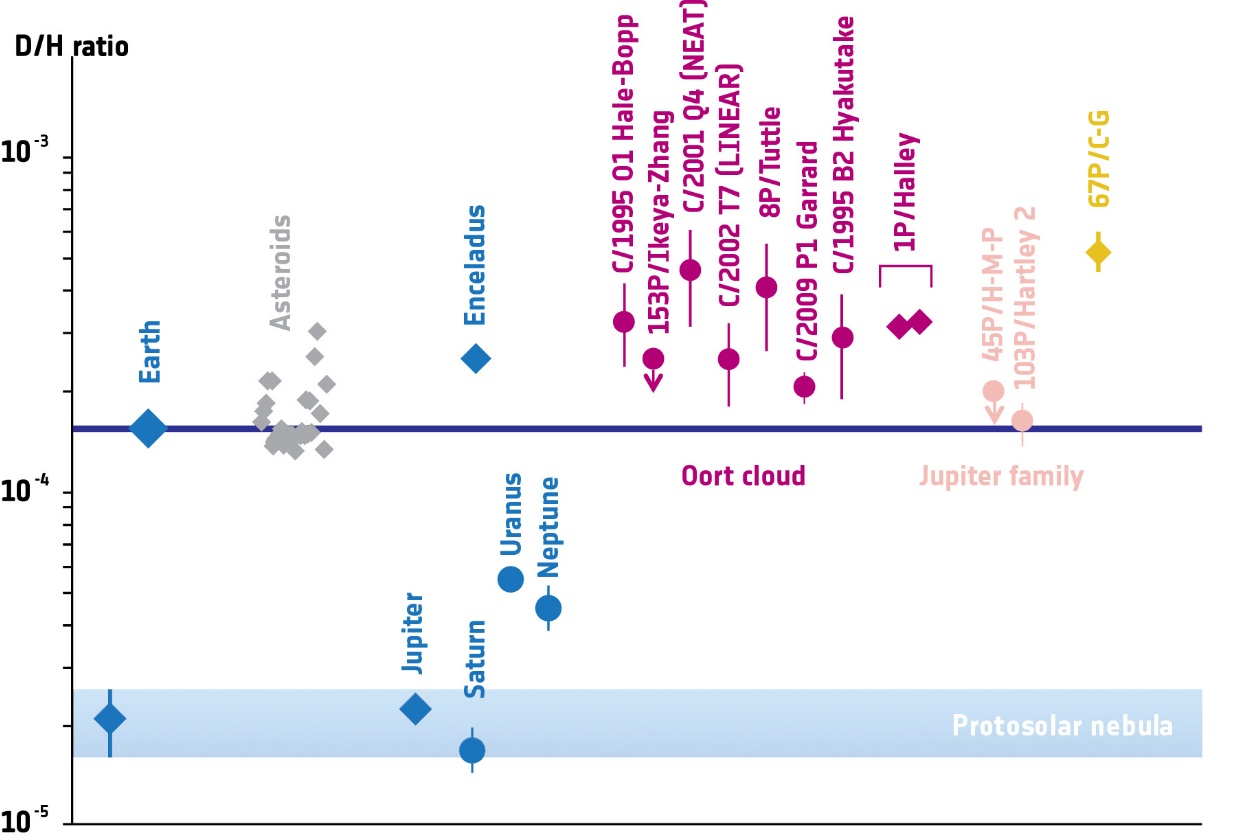 As you can see, the popular theory is that Earth's water came partially from the asteroid belt (between Mars and Jupiter, in the "snow line") and partly from hydrated bodies in the asteroid belt, smaller “asteroidal” bodies, carbonaceous chondrites, and water adsorbed into dry silicate grains in the nebula.

In the paper: "Origin of Water Ice in the Solar System" (2nd source: .PDF), Jonathan I. Lunine of the Lunar and Planetary Laboratory explains on page 315:

"The model for adding water to Earth from the primordial asteroid belt has the virtue that the deuterium-to-hydrogen ratio (D/H) measured in Earth’s oceans, the so-called “SMOW” [Note: Discontinued - VSMOW is used instead, and δ$^{18}$O is compared instead of D/H], is consistent with the most probable value of D/H computed from the broad range seen in carbonaceous chondrites (Robert, 2001; see also Robert, 2006). A cometary contribution of water would have a higher D/H: Three comets that fall into the “long-period” comet class, thought to be derived from the Oort cloud, all have D/H approximately twice that of SMOW (Meier et al., 1998a,b).

If typical, this should then limit severely the amount of Earth’s water that could have been contributed by comets, because no plausible mechanism has been identified for reducing the D/H value after accretion (contact with a nebular composition atmosphere without loss of the water to space seems implausible). Indeed, dynamical calculations limit the amount of water contributed by comets (essentially, from icy bodies resident at and beyond the orbit of Jupiter) to 10% of the total brought in from sources in the primordial asteroid belt (Morbidelli et al., 2000).

There are papers that explain that the importance of the water snow line for triggering formation of the first planetesimals during the gas-rich phase of a protoplanetary disk, when cores of giant planets have to form. See: "Planetesimal formation starts at the snow line" (September 29 2017), by Joanna Drazkowska and Yann Alibert.

That favors a major source of primordial water being icy bodies and the asteroid belt over the theory that the early oceans were solely created by objects that journeyed from the Kupier belt.

"There are broadly two possibilities: degassing of ‘wet’ planetary embryos accreted during the latter half of planetary formation or delivery to the surface of the planet by volatile-rich comets from distant parts of the solar system (Mottl et al., 2007). For much of the past two decades, the pendulum swung toward degassing, for two reasons. First, dynamical modeling of the early solar system suggested that it is difficult to deliver more than ~0.1 oceans of water to Earth from comets originating in the Kuiper belt or beyond (Morbidelli et al., 2000). Second, spectroscopic measurements of six Oort cloud comets revealed D/H values roughly twice that of average ocean water (SMOW), while D/H in carbonaceous chondrites is close to SMOW (Robert, 2003, 2006).

However, this emerging consensus is being reexamined in the wake of recent D/H measurements of the Kuiper belt comet 103P/Hartley2, which are indistinguishable from SMOW (Figure 1; Hartogh et al., 2011). Comets are also implicated by Earth’s depletion of Xe relative to Kr, which differs from meteorites (Mottl et al., 2007). Dynamical objections to comet-derived oceans may ultimately be resolved by the so-called Nice model, a suite of simulations showing that the migration of giant planets long after planetary accretion can explain many puzzling features of the solar system (Gomes et al., 2005; Morbidelli et al., 2005; Tsiganis et al., 2005). More observations and models are clearly in the cards for the coming 10 years.". 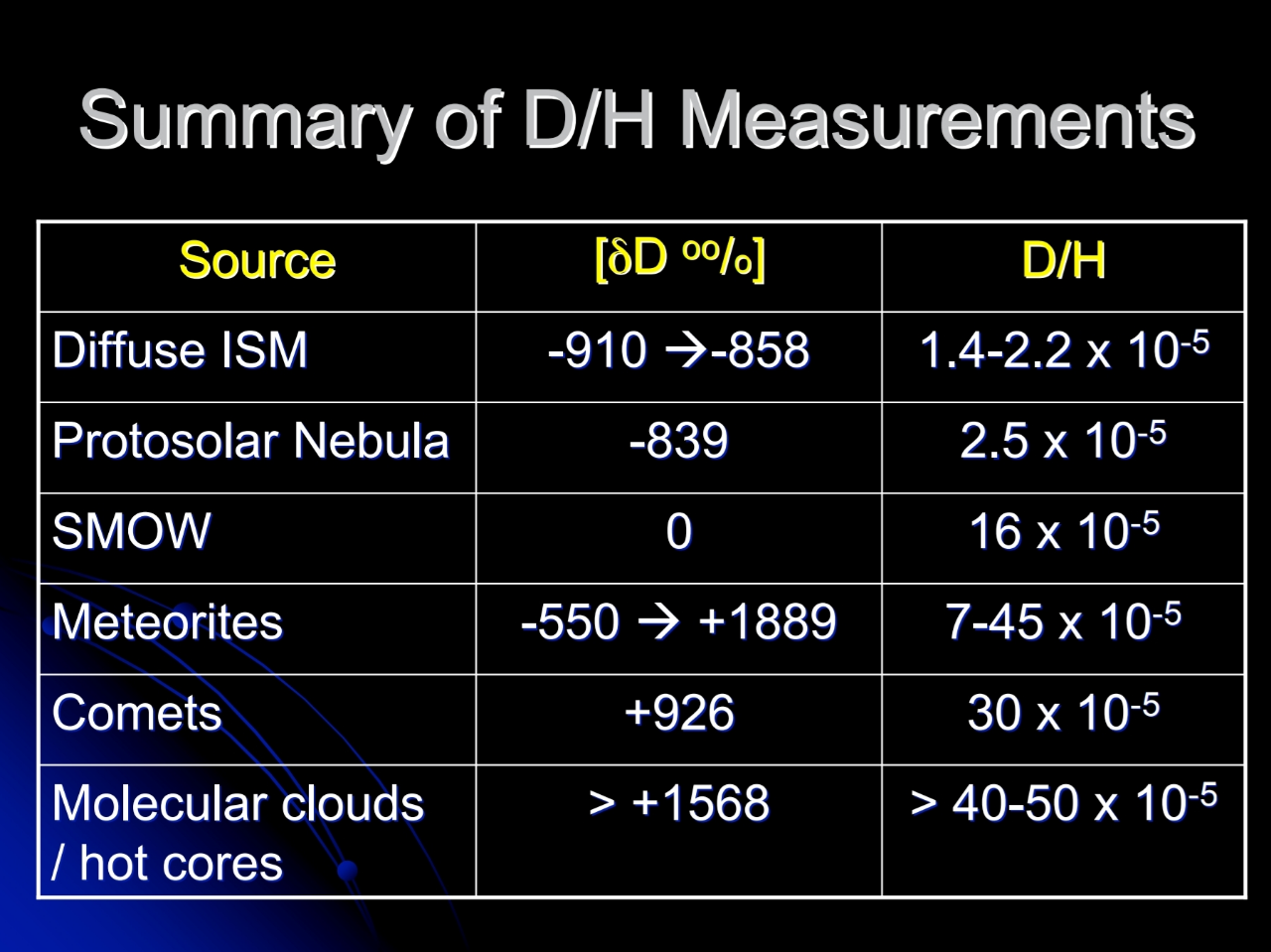 See "Evidence for primordial water in Earth’s deep mantle" (Paywall) (Nov 13 2015), by Lydia J. Hallis1, Gary R. Huss, Kazuhide Nagashima, G. Jeffrey Taylor, and Sæmundur A. Halldórsso or the article: "D/H ratios of the inner Solar System" which explains that the D/H ratio for various objects depends on the distance from the center of the accretion disk and supports the "wet" accretion model of the Earth, accruing most of its water when initially formed.

"... after the Sun's formation the D/H ratio of water in the evolving protoplanetary disc would have been dependent (at least initially) on the temperature of the surrounding environment, and thus distance from the Sun.".

Figure 1. - D/H ratio evolution in the early Solar System. Isotopic equilibration with molecular hydrogen results in a low water D/H ratio in the hot inner disc (less than 2 AU) for the first approximately 0.3 Myr after the Sun's formation (a; adapted from "The D/H ratio of water in the solar nebula during its formation and evolution"). By contrast, outer disc water (approx. 2–40 AU) remains unequilibrated, retaining the high D/H ratios inherited from the molecular cloud. Beyond approximately 0.3 Myr turbulent mixing produces a more uniform D/H distribution in the outer disc, with some molecular-hydrogen-equilibrated water being transported beyond the snowline to the region where the chondritic meteorites formed (b; adapted from "Water transport in protoplanetary disks and the hydrogen isotopic composition of chondrites").

Wikipedia takes the opposite view on page: "Formation and Evolution of the Solar System - Asteroid Belt where it is written:

"Water is too volatile to have been present at Earth's formation and must have been subsequently delivered from outer, colder parts of the Solar System. The water was probably delivered by planetary embryos and small planetesimals thrown out of the asteroid belt by Jupiter. [See the Nice Model and the "Grand Tack Hypothesis - Asteroid Belt"].".

There are lots of theories but one stating that a majority of the Earth's water was derived from Kuiper belt objects, and D/H ratios to support it, are difficult to find after several hours searching.

Not the answer you're looking for? Browse other questions tagged water rosetta comet kuiper-belt or ask your own question.

15
Will Rosetta have to adjust its orbit around Chury due to the comet's coma and tails?
9
What is the smallest body that has sufficient gravity for another body to orbit it?
7
Will kicked-up “dust” be a problem for Rosetta and lander Philae?
8
What was known about 67P/C-G's mass before the arrival of Rosetta?
3
Valuable materials in Saturn rings and comets vs. C-type asteroids
0
How could the gravitational pull of a comet affect spacecraft and astronauts landing on it?
3
Why is Rosetta not going to hover or descend multiple times before crashing into 67P/Churyumov–Gerasimenko?
2
Are there any specific plans for how to deal with near-Earth comets? If not, should there be?