Beyond the Apollo 12 incident, have there been any instances of triggered lightning?

As explained in this answer, the ionised plumes of engine exhausts can provide a low-resistance route for lightning strikes during a launch, potentially endangering the vehicle. This is thought to have been a factor in the Apollo 12 lightning strike which temporarily damaged essential control circuits on board.

This answer gives some more very thorough detail on the science behind this process and also astutely points out in the comments:

It might be that the Apollo 12 incident convinced people that it's not a good idea to launch when there are thunderstorms around.

Have there been any other recorded instances of this phenomenon occurring?

Perhaps the Apollo-12 incident was the first recorded occurrence and since then more precaution has been taken with launch conditions.

Sadly, it didn't convince them for long. At least one other vehicle was lost to triggered lightning.

Adding to the misery of the US launch industry in the late 1980s was the Atlas Centaur 67 incident, which was launched into cloudy conditions and subsequently struck by rocket triggered lightning.

Late in the afternoon of 26 March 1987, while the NRC was still considering whether to review the Theon Report as requested by NASA, an Atlas-Centaur designated AC 67 lifted off into a dark, precipitating stratiform overcast from launch complex 36B at Cape Canaveral Air Force Station. The payload was a Fleet SatCom satellite for the US Navy. NASA was responsible for managing the launch. Just under 50 seconds later a cloud to ground lightning strike was photographed at the pad and two seconds after that the vehicle began to break up. 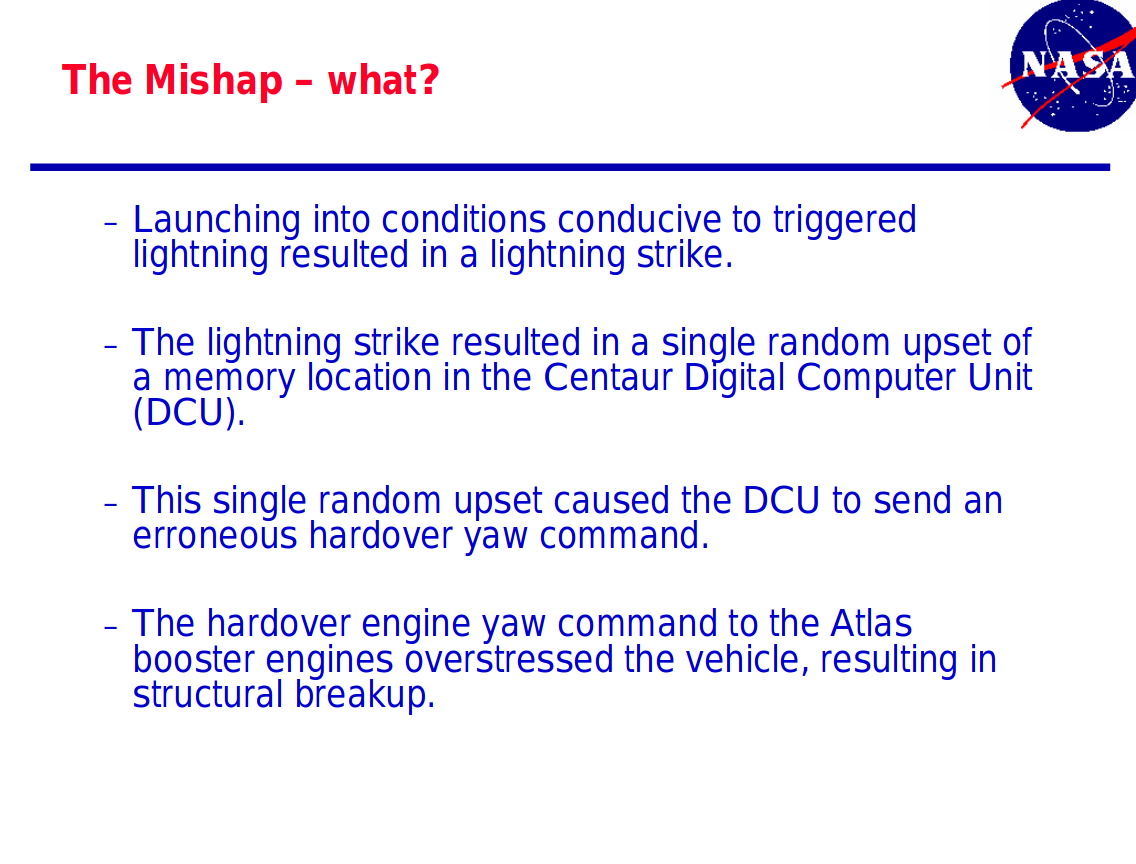 And a good Bryan O' Connor safety presentation on it here (source of the slide).

Just because it's awesome, here's a intentional rocket triggered lightning strike video (this one involved a wire).

Not the answer you're looking for? Browse other questions tagged launch lightning apollo-12 or ask your own question.

23
Why did NASA collect so much data about electrical phenomena at the Apollo 13 launch site?
9
Do rocket exhaust plumes really provide a pathway for lightning?
6
What is 'triggered lightning'?

11
How many successful Soyuz launches have there been?
8
Were there any extra objects in the latest Falcon 9 launch?
14
Is there a “procedural shift” meaning to the statement “we have cleared the tower”
6
What is 'triggered lightning'?
0
News of eXCITe with QIKcom-2 and SeeMe, have they been launched, or is there currently one scheduled?
6
Would any manned orbital launches to date have been possible (but lower) if they were launched retrograde instead of prograde?
35
Have any satellites been lost or damaged on their way to the launch site (ground/sea transport)?
28
Would it have been possible to launch rockets in secret in the 1960s?