Do we have a photo of a micrometeorite impact on a lens?

Micrometeorite and debris impacts on orbital spacecraft pose a threat to systems and crew. For example, a high velocity impact caused this chip in the International Space Station's Cupola. 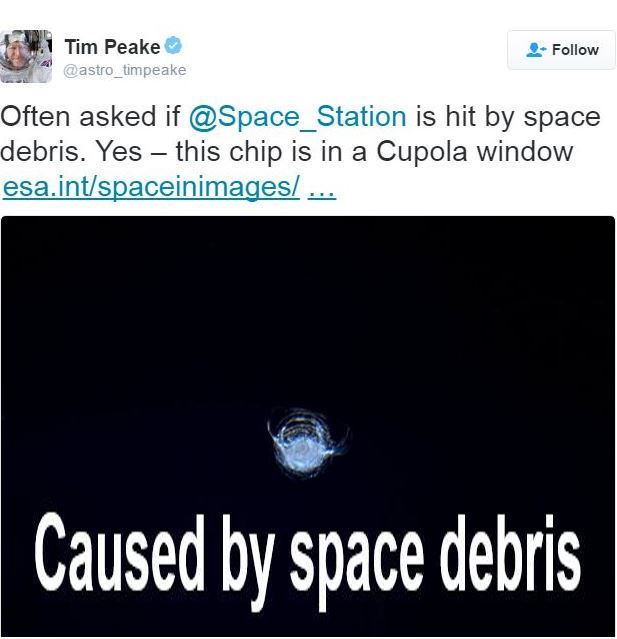 The ISS and many other craft have extensive shielding to protect from debris impacts. There are, however, many systems which are difficult to shield because they require exposed parts. In particular, (optical) telescopes and cameras require exposed transparent materials in order to work[citation needed].

Has there been any recorded impact damage to a telescope or camera lens?

And in particular, is there any imagery of such an impact taken by the same camera?

Clearly if the impact is severe enough, the camera may be destroyed. Also, depending on the focus of the camera, any damage to the lenses may not be visible.

For example, see TESS's imaging assembly which consists of four cameras with seven lenses each - plenty of opportunity for cracked glass!

Edit: To clarify, I'm looking specifically for damage to a lens or transparent covering that is part of the camera assembly itself, although information on related impact damage is always a welcome supplement!

This related question discusses protection for Hubble's primary which may have produced similar image effects in the event of impact damage.

Browse other questions tagged impact space-telescope camera meteoroid or ask your own question.

22
What satellites did the Shuttle retrieve from orbit?
29
How is the Hubble main mirror protected from debris?
14
How fast do optical surfaces get dirty or damaged in space?
2
What are current challenges if any for cameras in space?

18
What is the probability of impact?
29
How is the Hubble main mirror protected from debris?
8
What impact would a pea size meteor have when it hits the ground?
4
Earth gravity lens focus
3
To use a gravitational lens as a telescope, does the hypothetical user have to do so from a given angle?
5
What might the first deep space telescope using the Sun or Jupiter as a gravitational lens be like?
14
How fast do optical surfaces get dirty or damaged in space?
4
What's the largest optical lens put in space?