What is the timespan for a block of Phobos to reach a low orbit around Mars with a solar sail?

Edit: Although this question has been marked as a duplicate of this one about solar sail thrust calculation, they are different because I ask about a solar sail that has an orbital trajectory and will have a low trust transfer, going from one circular orbit to another.

Notice: An answer to this question may be similar to this one, but the energy calculation there uses the mass of propellant !

This would be the starting point of the journey. 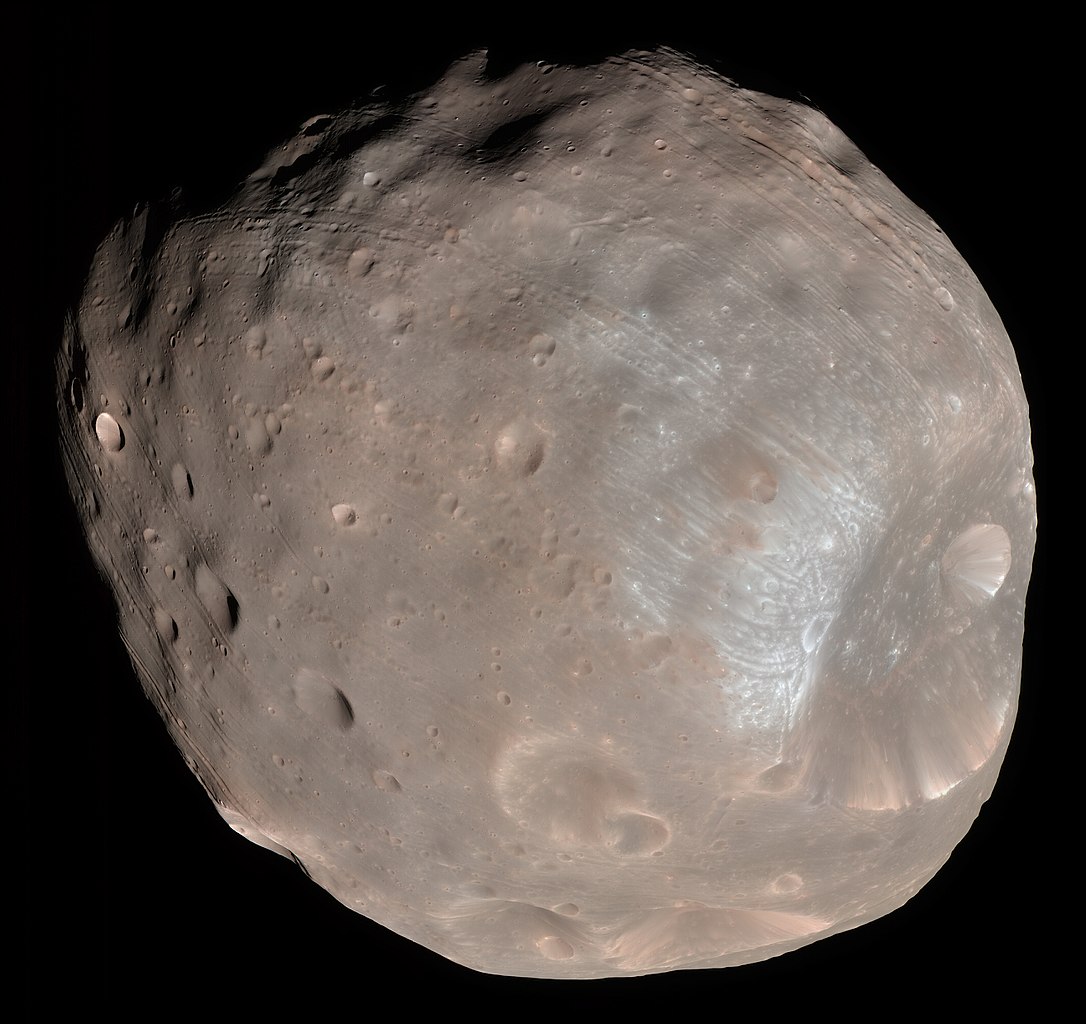 Could it be advantageous to saw a rectangular block of 5 x 7 x 8 meters out of Phobos and bring it to a low orbit around Mars and change it into a space station ?

By creating a space of 3 x 5 x 6 meters within this block and a construction to prevent it from falling apart, with a mass density of 1.876 g/cm$^3$ the mass of the block would be about 3.6 x 10$^5$ kg.
Consequently this block from Phobos would have 2 meter thick walls and would give radiation protection to life within it.

For a low thrust transfer with a solar sail, going from one circular orbit to another simply requires the same delta-v as the difference between the two speeds, so in this case the delta-v to get the block from Phobos to a 100 km above Mars will be about 1400 m/sec.

But how does one calculate the timespan and energy needed to get the block station in that low orbit around Mars with a solar sail with an area of 100 x 100 m for instance, assuming the solar sail is always facing the direction of travel and for half of the orbit it is in the shadow of Mars ?

Now let's assume that the solar sail will be in the shadow for half of the orbit and produce no force (this is not true, it will be in the shadow for less than that). A quarter of the orbit will be in the sunlight and moving towards the Sun, so it will decelerate our Phobos block. For another quarter, it will be in the sunlight and moving away from the Sun, so the Sun would accelerate our block - to avoid this, we will keep the sail parallel to the Sun rays, so that again it won't produce any force. During the quarter orbit where it will decelerate our Phobos block, we will keep the sail perpendicular to our direction of travel, and the force produced will be proportional to $sin(\theta)$ where $\theta$ is the angle formed by the sail and the Sun rays. The average of this factor during this quarter orbit can be calculated by integrating $sin(\theta)$ from 0 to 90 degrees and taking its average. $$ \alpha _ {1/4 orbit} = \frac{\int_{0}^{90} cos(\theta) d\theta}{90} \approx 0.636 $$ For the whole orbit, it will be $0.636 / 4 = 0.159$. This means that on average, during the whole orbit, we will output only $0.159$ of the force compared to as if we were always with the sail perpendicular to the Sun rays.

Some notes on the estimate:

Removing totally Mars's shadow would mean we will use half orbit instead of a quarter, so the time will be halved ("only" 1426 years).

Below some Python code with the calculations:

Could it be advantageous to saw a rectangular block of 5 x 7 x 8 meters out of Phobos and bring it to a low orbit around Mars and change it into a space station?

Orbital mechanics aside, a block of Phobos would not probably not make a good space station.

We often think about asteroids and small moons as being solid hunks of rock, but an object as small as Phobos which does not have enough gravity to pull itself into a sphere would not have gone through a molten stage to turn itself into solid rock. And it does not have enough gravity nor depth to produce the pressure necessary to produce rock, nor the seismic activity and weathering effects to reveal it on the surface.

Instead, Phobos is likely a pile of rubble weakly held together by its gravity.

The recent thinking, however, is that the interior of Phobos could be a rubble pile, barely holding together, surrounded by a layer of powdery regolith about 330 feet (100 meters) thick.

“The funny thing about the result is that it shows Phobos has a kind of mildly cohesive outer fabric,” said Erik Asphaug of the School of Earth and Space Exploration at Arizona State University in Tempe and a co-investigator on the study. “This makes sense when you think about powdery materials in microgravity, but it's quite non-intuitive.”

An interior like this can distort easily because it has very little strength and forces the outer layer to readjust. The researchers think the outer layer of Phobos behaves elastically and builds stress, but it’s weak enough that these stresses can cause it to fail.

Scott Manley goes into the "pile of rubble" issue, and other issues with turning asteroids into space stations, in his video about Spinning Asteroids To Make Space Stations.

Not the answer you're looking for? Browse other questions tagged orbital-mechanics spacecraft space-station solar-sail phobos or ask your own question.