How to determine an orbit of a satellite for a collision detection?

How can I determine a pair of initial conditions for a second satellite that would lead to a collision?

Propagating an orbit is solving a set of differential equations by numerically integrating over time. The main effects are gravity and drag. As long as the spacecraft has a constant drag coefficient (it's not tumbling) these equations can be run backwards in time just as easily as they can be run forwards. As noted again below, when running backwards in time don't forget to change the sign of the drag force and if you are using any spherical harmonics other than the zonal harmonics (J2, J3, J4, ...), don't forget to rotate the Earth backwards as well!

The procedure would be to integrate the motion of the first spacecraft from your initial state $\mathbf{v_0}, \mathbf{x_0}$ for one day. Call the final position and velocity $\mathbf{x_1}, \mathbf{v_1}$.

Now start a second spacecraft at the collision point $\mathbf{x_1}$ but choose a velocity different than $-\mathbf{v_1}$, and propagate it for one day. Call the result $\mathbf{x_2}, -\mathbf{v_2}$ (note the negative sign in front of velocity).

When you choose a different velocity, don't forget to make sure it doesn't also intersect the Earth's atmosphere. Once you fix your initial orbit (see below) a good way to do this is to keep the radial velocity the same and just rotate the tangential velocity around the radius vector. That will result in a nearly identically shaped orbit but with a different inclination.

This should work for a central gravitational force with spherical harmonics (J2, etc.) but no Sun or Moon, plus a drag term dependent on velocity squared and on altitude using some atmospheric model. (See Atmospheric drag effect for some ideas.) However, if you use drag, you need to change the sign of your drag force when propagating backwards in time. Reminder that this only works for a constant drag coefficient and no pathological issues like atmospheric reentry.

Also, if you are using any spherical harmonics for gravity besides the zonal harmonics (J2, J3, J4, ...), you'll need to spin the Earth backwards as well.

You also need to pay attention to where each orbit goes. Your initial conditions seem to have a periapsis of about 3660 km, which is an altitude of about -2710 km!! which is below the surface of the Earth.

Below I've integrated using only the central force and no drag with a simple Python script. You can see that the spacecraft dips below the Earth's surface. You can add J2 and higher harmonics and drag after you get this going. (See this answer for some ideas about adding J2 and relativistic correction, but you'll need a more formal coordinate system to do it correctly. ) 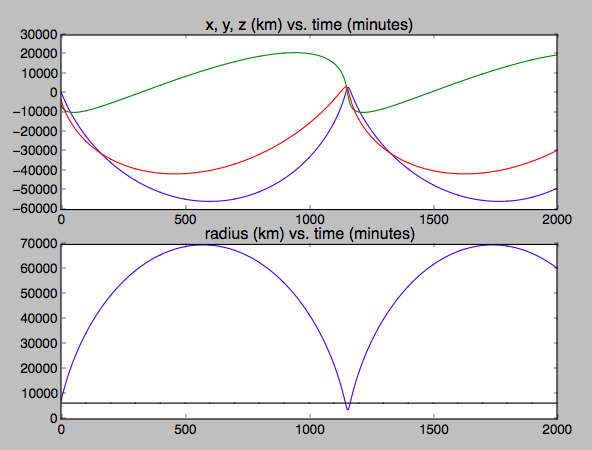 Not the answer you're looking for? Browse other questions tagged orbital-mechanics artificial-satellite orbit collision-avoidance or ask your own question.

7
How to calculate the planets and moons beyond Newtons's gravitational force?
8
How are co-located satellites positioned relative to each other?
5
Algorithmic methods or techniques to find conjunctions in high N Keplerian element ensembles?
2
How to solve the two-body problem in the ECI frame through numerical integration?
4
Propagating satellites without TLE in python
1
Atmospheric drag effect

16
What is the math behind Magnetorquers?
5
How to model a continous burn and recalculate orbit properties post burn
5
How to determine an algorithm for Low Earth Orbit propagation, considering perturbation from the moon, sun, etc?
4
Would the orbits intersect during 7 days?
2
Calculating orbital parameters for given requirements
4
How quickly can the Starlink spacecraft respond to an impending collision?
5
Do I have enough info to find the true anomaly of an orbit?