How large is the Earth's gravitational Sphere of Influence and how can it be calculated?

There was a recent update on ISRO's Mars Orbiter Mission's (MOM) Facebook page that it has crossed the Earth's Sphere of Influence (SOI):

MOM is going to cruise out of the sphere of Influence of Earth in about 4 hours from now! we will keep you posted.

The Sun is much more massive than any of the planets and its gravity dominates the Solar System. Only very near to the planets, the planetary gravity become stronger than that of the Sun. This region around the planet is referred to as the Sphere of Influence (SOI) of that planet.

There are a couple of definitions, but the most useful one is called the Hill Sphere. Essentially this is the area around which one can orbit around an object, and not be pulled away by another object (Such as the Sun). As the linked article states, it can be calculated for objects that have one object much more massive than the other (Almost every case of interest) by using the following formula:

Assuming a circular orbit, which makes the math easier, gives that distance to be : 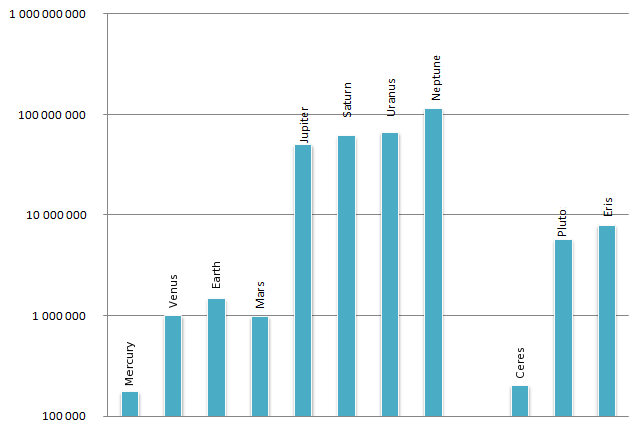 The gravitational sphere of influence asks which of two gravitating bodies should be used as the origin for purposes of modeling the behavior of some third body such as a spacecraft. This comes into play in at least two key places:

When looking at things from the perspective of a frame of reference with its origin at the center of the smaller body, the gravitational acceleration toward the larger body is calculated as a "third body effect" (sorry for the confusing nomenclature; it's not mine). The answer to the above questions (where should I switch patched conics / where should I switch my flight software) is the surface on which this perturbing third body acceleration is equal in magnitude to the gravitational acceleration toward the smaller body. This surface has a rather complex shape, approximately that of an oblate spheroid, but it cannot be expressed in terms of the elementary functions. However, the "right" place along the line connecting the two bodies can be expressed simply. Relative to the smaller body, this distance is $R\left(\frac m M\right)^{2/5}$, where $R$ is the distance between the two bodies, $m$ is the mass of the smaller body, and $M$ is the mass of the larger body.

So what determines whether an orbit is stable? The answer is very complex. In the three body problem, if that third object stays within an extremely complex boundary called the Roche lobe, the orbit of that third object about the smaller body will be stable for at least some amount of time. The Roche lobe just touches the L1 and L2 points and fans out from there. George Hill used the L1 point to define a sphere that approximated the Roche lobe. This is still intractable; the L1 point is defined by a fifth order polynomial that cannot be solved in terms of the elementary functions. Hill further simplified things by realizing that a simple cubic equation yields a very good approximation of that intractable fifth order equation. The result is $R\left(\frac m {3M}\right)^{1/3}$.

So which is "right"?

So which is "right", the Lagrange/Tisserand sphere of influence or the Hill sphere? First off, it's important to note that both are approximations. This muddies the waters as to which is "right". More importantly, the two concepts attack very different questions. If you are doing mission planning to send a spacecraft to the Moon or some other planet, you should be using the sphere of influence. Similarly, you should probably be using the sphere of influence if you are building the guidance and navigation subsystem for that spacecraft. On the other hand, if you are bringing an asteroid back to Earth for mining, you probably want to place it in a distant selenocentric retrograde orbit. Now the Hill sphere is the correct choice with regard to the orbit in which you place your asteroid.

I will admit that that is being ridiculously nit-picky. The "right" answer is that the two concepts address two different questions. Both are "right."

Hill sphere: http://en.wikipedia.org/wiki/Hill_sphere, or practically any textbook or journal article that addresses invariant manifolds as applied to space exploration. For example, Koon, Lo, Marsden, and Ross (Dynamical Systems, the Three-Body Problem and Space Mission Design) write about the Hill sphere.

This is what I use in class, these are standard formulas from any text book. Define 2 functions

As expected, the gravitational sphere of influence is much smaller than the SOI.

Not the answer you're looking for? Browse other questions tagged orbital-mechanics isro mars-orbiter-mission soi or ask your own question.

8
What altitude would an aphrodiosynchronous satellite need?
20
Has the Earth's red atmosphere rim ever been photographed?
11
Why is the SOI of Jupiter less than that of Neptune?
4
Gravity braking and orbit around same body in Low energy transfers