How was “Space Ram” (instant ramen noodles) prepared and eaten on the Space Shuttle?

The BBC Witness Podcast The Invention of Instant Noodles mentions that "Space Ram" (ramen noodles for space) was developed for eating on the Space Shuttle. After about 07:00:

BBC: And at the age of 95, (Momofuku) Ando reinvented the instant noodle once again, this time for a zero-gravity eating experience.

Tour Guide at the Cup Noodle Museum: “Space Ram is a type of instant noodle developed especially for space travel.”

Tsutsui (Nissin foods): There’s no gravity in space (sic) so first it’s really hard to make ramen in those conditions. And if the soup splashes onto the walls inside the Shuttle, it could cause serious damage because every wall is equipped with delicate, precision instruments. So the soup can never be splashed, and the noodles mustn’t float. He (Ando) developed the technique, and that’s Space Ram.

How was Space Ram safely prepared, and then eaten in zero gravity?

Were there Space Ram prototype tests, or did it just work the first time?

Images below are from the BBC web page, but I'm not sure these are what the final product looked like. 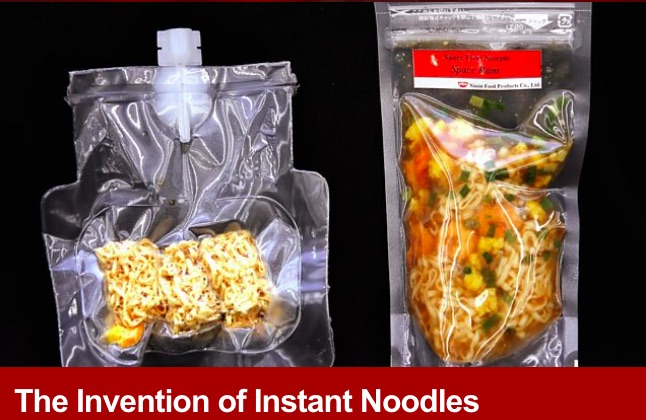 Like many dehydrated space foods, it's prepared by injecting hot water through a port in an otherwise sealed bag, manually mixing it by massaging the bag, and waiting a few minutes; the noodles are thinner than typical instant noodles so that moderately hot (instead of boiling) water can soften them.

As for eating it without spilling, the secret seems to be thickening it with starch¹. It was ground-tested prior to going into space, of course:

[JAXA astronaut Soichi] Noguchi helped test the early stages of the astro ramen, which astronauts can open and eat normally rather than suck through a tube like other space meals.

The soup is thick enough to prevent spilling, Nissin said, while the noodle balls retain their shape after being re-heated.

Boiling water is not used in space so Space Ram can be heated with water of 70 degrees Celsius (160 Fahrenheit), thanks to a unique blend of flour and starch, it said.

Keep in mind that in zero gravity, reasonably viscous liquids, even water, will stay pretty manageable due to surface tension, as shown in this video: 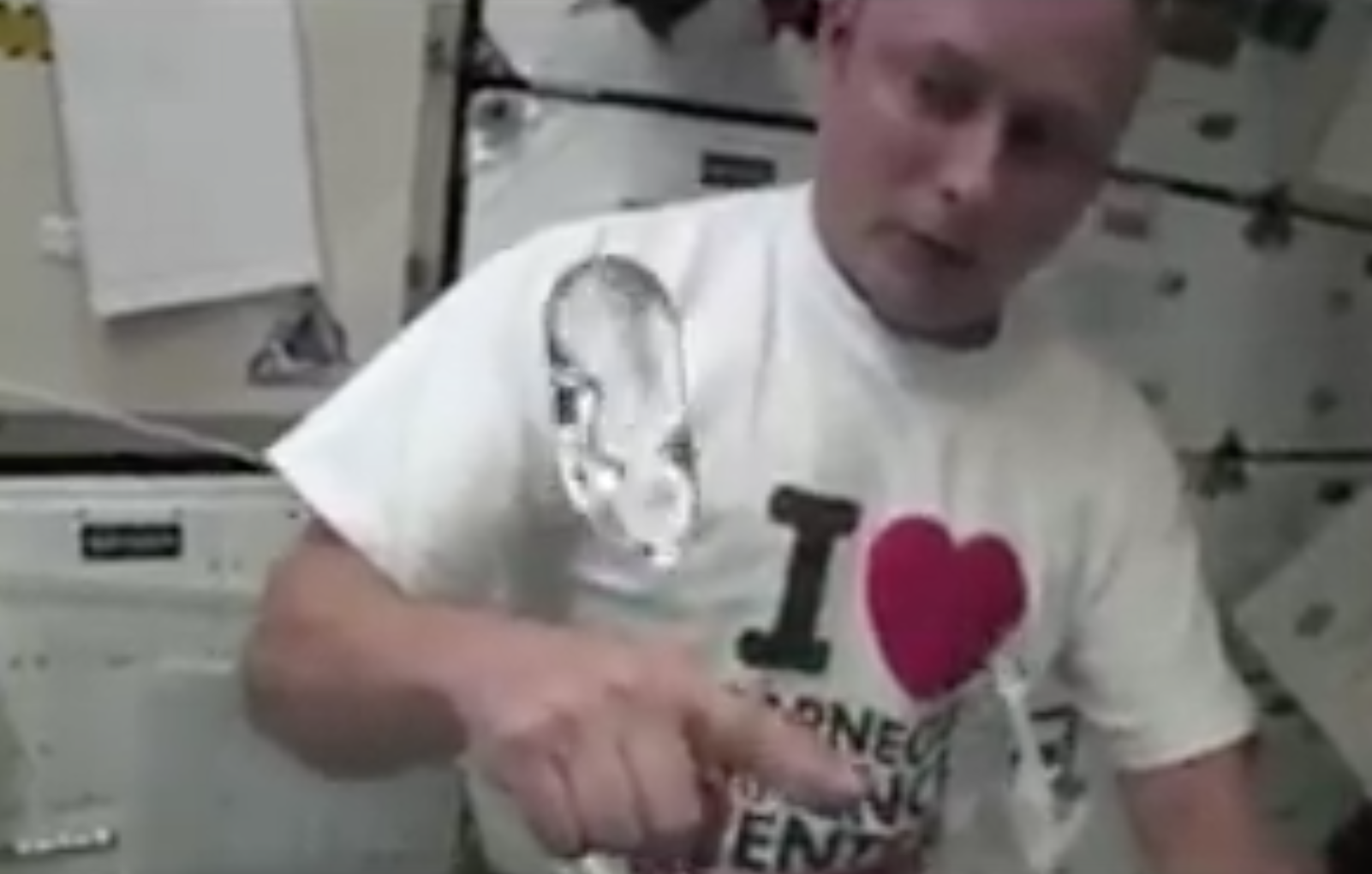 If a quantity of soup gets away from the package, it will form a tidy drifting sphere and an alert astronaut will have a decent chance at catching it before it drifts into anything expensive.

While food spillage and crumb control are of definite concern aboard the ISS, they seem to rely on sensible amounts of caution and responsible cleanup rather than extreme restrictions on what can be eaten; here's a scrambled-egg breakfast burrito being assembled in zero g, which could be a messy proposition even on Earth. 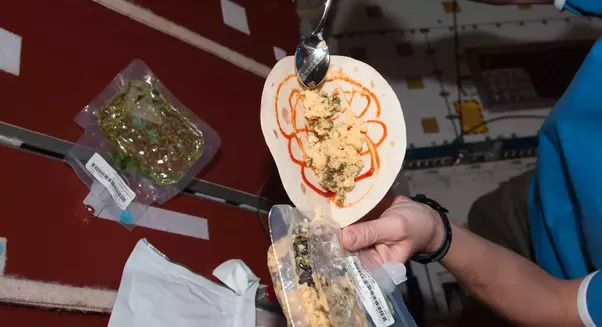 ¹ Some instant noodle brands use potato starch as a thickener, although not Nissin's "Top Ramen".

If the package on the right of the lower picture in the question was actually flown, it would have been heated in the Shuttle galley's "food warmer" / "oven". This is because it already contains water and does not need rehydration.

Here is a description from the Shuttle Crew Operations Manual.

The oven is divided into two principal compartments: an upper compartment designed for heating up to 14 rehydratable food containers inserted on tracks, and a lower compartment designed to accept up to 7 flexible packages. The OVEN/RHS ON/OFF switch provides power to the oven heaters and the control electronics assembly. The oven fan ON/OFF switch enables/disables power to three oven fans. These fans circulate warm air over a heat sink, thus providing forced convection heating for the rehydratable packages. The flexible packages are held against the heat sink by three spring-loaded plates, and warmed by conduction. The oven has a heating range of 160° to 185° F. The oven door is operated by a "squeeze" latch requiring only 3 lb of pressure to open. 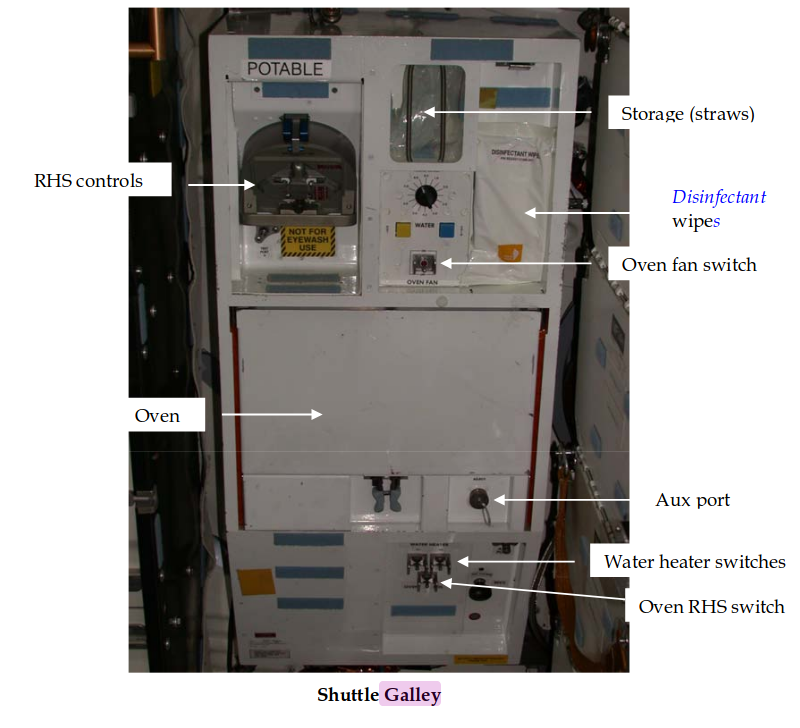 Not the answer you're looking for? Browse other questions tagged space-shuttle microgravity food jaxa or ask your own question.