How did Syncom-3 achieve eight stages of frequency doubling? I only see seven in the block diagram

@BlueCoder's nice answer to Syncom-3 was the first geostationary satellite. Anyone know of a description of the onboard electronics? mentions that the the master oscillator was doubled eight times to get to (nearly) X-band.

The answer links to NASA Technical Report R-252 “Syncom Engineering Report, Volume II” and in the neighborhood of pages 10 to 12 there is a description of the RF system and Figure II-7 shows a block diagram.

How does the "missing" doubling come about? What is a "Multiplier Inverter" and is that the "secret sauce" that does it? 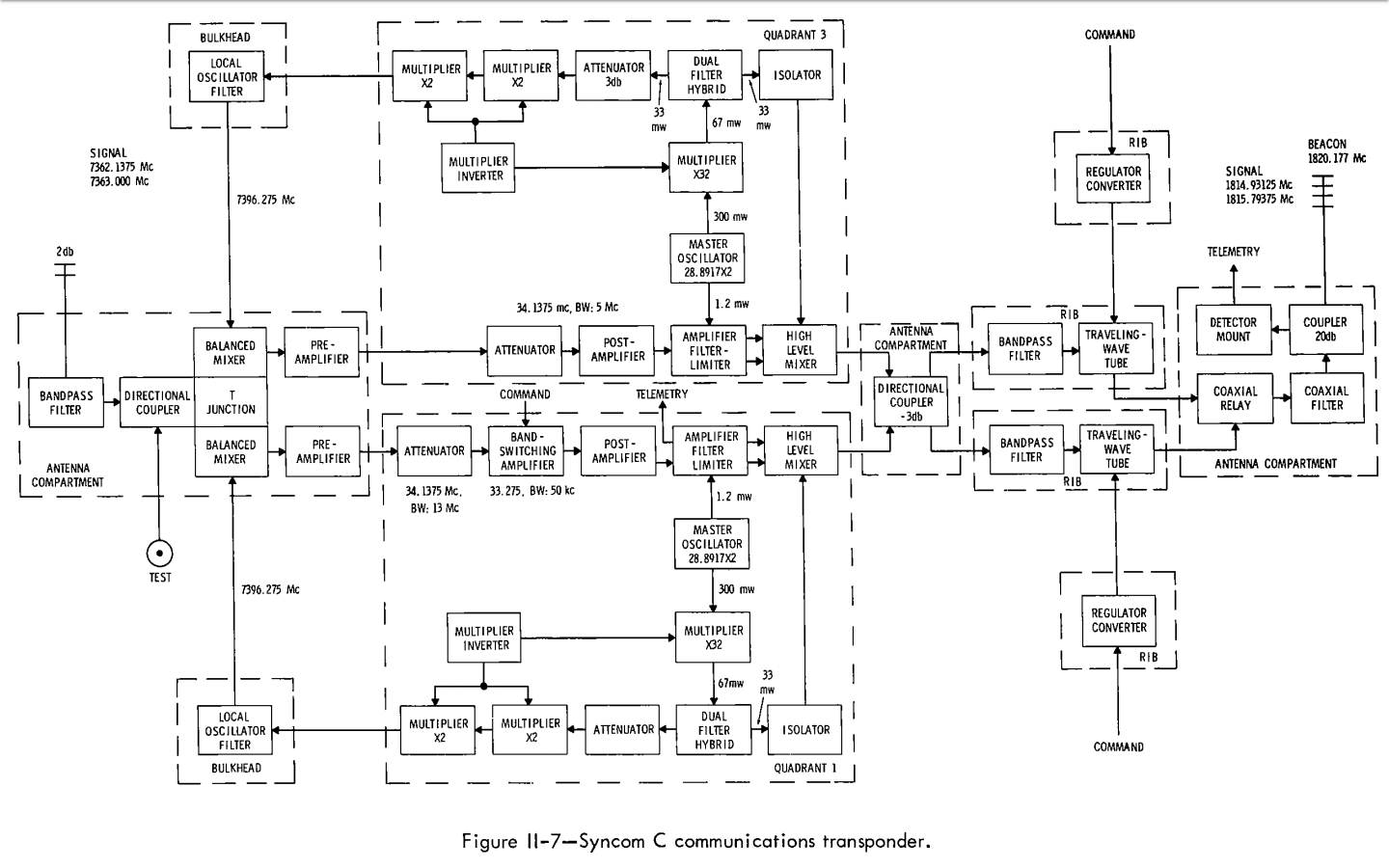 The first frequency doubler is part of the "Master Oscillator". Note the "X2" in "28.8917X2". A reason to include it in the drawing like this might be that, together with the oscillator itself, it is the only 'active' component in the frequency generation block. The first stage is the only one build with a transistor amplifier. The base oscillator requires such a stage to extract a clean and strong signal which then can be further amplified to the stated 300 mW. All stages after that are 'passive' in a sense that the output signal is always weaker than the input signal - like the 32x multiplier that only forwards one fifth of the input power.

About the function of the "multiplier inverter" I can only speculate, especially because it doesn't have any inputs. It might be some feedback loop to stabilize the circuit.

I found a nice paper detailing how these "Varactor based frequency doublers" work: http://www.jhuapl.edu/techdigest/views/pdfs/V04_N2_1964/V4_N2_1964_Thompson.pdf

If you're interested how this circuit on Syncom-3 might have looked like, the paper contains an image of the circuit used in the GEOS satellites in 1965 on page 10.

This is quoted from the text on page 13 of that wonderful R-252 Tech. report: "The frequency multiplication is accomplished in eight doublers, of which all but the first involve the use of varactor diodes connected push-push in efficient duo-mode networks. The first doubler uses a conventional transistor circuit"

Not the answer you're looking for? Browse other questions tagged history communication-satellite geostationary electronics or ask your own question.

2
Syncom-3 was the first geostationary satellite. Anyone know of a description of the onboard electronics?

1
How/from where did the the two TiPS components get the names Ralph and Norton?
62
How did people know how to build the first space ship?
32
When did the concept of “stages” enter rocketry?
8
Did von Braun have “a thing” for fins? Why did Saturn I block 2 get fins because it's a “von Braun” rocket?
6
How did the Corona (Key Hole) satellites film canisters deorbit?
9
How did the star tracker on the Corona (Key Hole) satellite work?
1
How did NASA fund searches for extraterrestrial life before 1993? How were the searches done?
1
How much did the cheapest communications satellite cost?