Clicking through NASA.spinoff.gov I came to the page for spinnoff 2001 Glenn Research Center and found this: 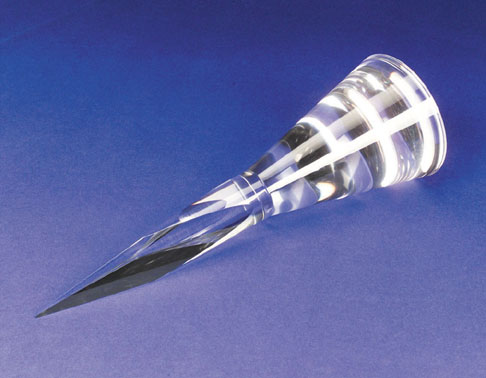 In Archive.org I found more images. Starting at this https://archive.org/details/GRC-C-2000-454 you can view many more at the bottom.

I then found these:

Near the bottom of page 3 of TM-2000-208401 in the section labeled Prototype Hardware Fabrication & Assembly, it says:

The secondary concentrator DTIRC has an 8.9 cm. inlet diameter, a 1.9 cm. exit diameter, and is 12 cm. long. The flux extractor is 15 cm. long and has 3 equilateral facets.

I think the idea is that they are non-imaging and use what I have heard called non-Liouvillian optics; in other words they don't obey Liouville's Theorem and conserve phase space or étendue.

But I still don't understand what these are "for" or how much they actually concentrate.

A refractive secondary solar concentrator is a non-imaging optical device that accepts focused solar energy from a primary concentrator and redirects that light, by means of refraction and total internal reflection (TIR) into a cavity where the solar energy is used for power and/or propulsion applications. This concept offers a variety of advantages compared to typical reflective secondary concentrators (or the use of no secondary at all): higher optical efficiency, minimal secondary cooling requirements, a smaller cavity aperture, a reduction of outgassing from the cavity and flux tailoring of the solar energy within the heat receiver. During the past 2 years, NASA Lewis has been aggressively developing this concept in support of the NASA Marshall Shooting Star Flight Experiment. This paper provides a brief overview of the advantages and technical challenges associated with the development of a refractive secondary concentrator and the fabrication of a working unit in support of the flight demonstration program.

After checking this reference (quoted in the question), here's my take on this device.

The general idea is to transfer concentrated solar energy from a primary concentrator, like a primary mirror, into a chamber (they call it a "cavity") for use in such applications as solar thermal power (electricity) production, solar thermal propulsion, or a solar furnace. These applications generally require that the chamber be at a higher pressure than the ambient environment, so the solar energy has to pass through some sort of transparent wall or window that allows maintaining the chamber pressure. Even if the chamber pressure is equal to ambient, an un-blocked opening in the chamber would let a lot of heat escape, both by radiation and by convection, so some kind of wall or window is needed.

The typical quasi-planar window suffers from significant reflective losses. The paper quotes as much as 50% of the incident light being reflected back out uselessly. The device shown cuts those reflective losses to nearly zero by using a material of high refractive index and a matched geometry that produces total internal reflections at all interfaces except those intended to transmit light directly into the chamber. The material's refractive index determines the angles of the facets and other surfaces.

It appears the secondary concentration ratio is essentially the ratio of the area of the input side of the cone to the area of the output side, if the transfer were lossless. Given the dimensions quoted in the reference above that ratio would be ~22:1. Were that output side just a flat surface at the small end of the conical section there would be a strong reflection there and energy would be lost. The purpose of the flux extractor is to avoid that flat surface at the end of the secondary concentrator (the conical section), transmitting the energy into the cavity through the high-angle-of-incidence facets, minimizing the net reflection coefficient.

Figure 2 of the reference shows how it is used in a solar thermal rocket engine. In that figure light enters from the left and is transmitted via the flux extractor into a cavity within a larger chamber. The cavity absorbs the light, converting it all to heat that conducts through the cavity walls. A working fluid (the propellant) flows to the right within the chamber, around the outside of the cavity, absorbs the heat from the cavity, and then is expelled through a standard de Laval nozzle. In the notional engine shown the concentrator is in a position normally occupied by the injector of a standard chemical rocket engine.

Given a set chamber temperature, propellants with lower average molecular (or atomic) masses yield higher specific impulse. Molecular hydrogen would be a good candidate for the propellant.

Not the answer you're looking for? Browse other questions tagged nasa propulsion solar-power or ask your own question.

1
Why did Deep Space 1 use solar concentrators?
3
Using a solar sail to concentrate sunlight at large distances