Why did the MESSENGER probe get deorbited?

I have heard a bit about why interplanetary probes get deorbited, but that was about Jupiter and Saturn that have potentially life-friendly moons. But regarding Mercury, no life could exist there: the atmosphere, temperature, etc. would not support it.

Why was MESSENGER deorbited?

Why was MESSENGER deorbited?

It wasn't. (The wikipedia page on MESSENGER is wrong in this regard.)

MESSENGER was inserted into an orbit about Mercury with a high inclination, a high eccentricity, and a rather low periapsis. The Kozai mechanism would have naturally resulted in this orbit evolving toward an even greater eccentricity, with the inevitable outcome of the vehicle eventually colliding with the planet. The spacecraft performed a number of orbital maneuvers to delay this inevitability. The outcome was still inevitable given the choice of orbits; the vehicle had a limited amount of fuel for its thrusters.

The question thus becomes "Why was MESSENGER placed in such an orbit to begin with?" The answer to this question involves the science the mission was intended to perform and the thermal characteristics of the vehicle and of Mercury.

A polar orbit was chosen because this let the vehicle observe, close up, Mercury's north pole. This was also why the periapsis was made so low. The eccentricity had to be made rather high because thermal radiation from Mercury's daytime side (up to 427 degrees Celsius) would have prematurely cooked the vehicle had the orbit been anywhere close to circular. The periapsis passes had to be very fleeting. The science returns would not have been nearly as good as they were had the orbit been less inclined or higher up.

While the question could be marked as duplicate of Through what process does MESSENGER undergo orbital decay?, there's some hesitation to do that so I'll post an answer and also link to @DavidHammen's answer.

edit: and now also link to @DavidHammen's other answer!

MESSENGER was not specifically sent crashing into Mercury by direction of NASA, in fact they delayed this by boosting it to a higher orbit. But NASA knew that by putting it into a low orbit around Mercury in the first place (low in order to observe Mercury, the whole point of the mission), MESSENGER was destined to crash.

This is because the spacecraft was orbiting around a very low mass body, very close to a very large mass body (the Sun), and the Sun's tugging on MESSENGER's orbit increased its eccentricity until it intersected the planet's surface.

From the April 2015 SpaceRef article MESSENGER's Operations at Mercury Extended:

The previous maneuver, completed on March 18, raised MESSENGER to an altitude at closest approach from 11.6 kilometers (7.2 miles) to 34.4 kilometers (21.4 miles) above the planet's surface. Because of progressive changes to the orbit over time in response to the gravitational pull of the Sun, the spacecraft's minimum altitude (periapsis) continued to decrease.

Yes, that's that's only 5.5 kilometers above the surface of Mercury!!

So even a very weak tug by the Sun via the Kozai mechanism will result in a quick demise, and the three mission extensions only served to delay the inevitable.

Notice the nice timing by the way, Messenger crashed soon after the end of the 2nd mission extension. 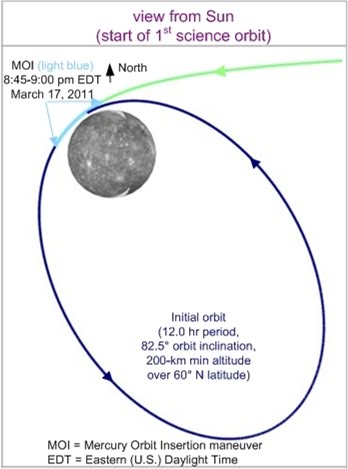 Not the answer you're looking for? Browse other questions tagged mercury deorbit messenger or ask your own question.

15
Through what process does MESSENGER undergo orbital decay?

7
Why the thermal imaging of Mercury's surface requires a telescope on a jet flying through an eclipse?
19
Why would extra fuel be needed to de-orbit the ISS (if it comes to that)?
70
Why does the ISS have to be destroyed?
7
Is a graviational slingshot around Mercury a feasible solution for space probes?
72
Why is it easier to escape the solar system than get to Mercury or the Sun?
4
Why couldn't China's space agency do a controlled deorbit burn for the Long March 5B?
5
If a Space Shuttle tile deorbited on its own, what percentage of it's mass if any would remain in one piece until it reached the surface of the earth?