Does ISS get a surplus of oxygen or water?

[overhauling the question to get rid of misconceptions, which were irrelevant anyway]

In the balance of input/output of the system ISS is, I spotted something that looks like build-up of stockpile of oxygen.

ISS receives large shipments of water with every resupply mission - amounts of order of 420kg.

The water is circulated on ISS with very little losses - recycled for drinking or for use in experiments, moisture from air captured, urine purified. Water is also broken up into oxygen and hydrogen through elextrolysis, then the hydrogen, through Sabatier process is used to replace oxygen in carbon dioxide produced by breathing, the resulting methane vented into space. Additionally, dry food is metabolized into carbon dioxide and water, adding even more water to the system.

There's supposedly a shortage of hydrogen for the Sabatier process, extra hydrogen delivered by cargo shipments.

Generally, on input we have big shipments of $H_2O$, some $H_2$ and a lot of organic compounds of food, built mostly from carbon, hydrogen and oxygen.

On output we have the vented $CH_4$, and small amounts of $H_2O$ in brine left after purifying the astronauts' urine.

And so, it seems we have excess oxygen build-up.

None of these is significant enough to account for the large shipments.

So where does all the extra oxygen go?

...or are they incessantly stockpiling on the surplus water? 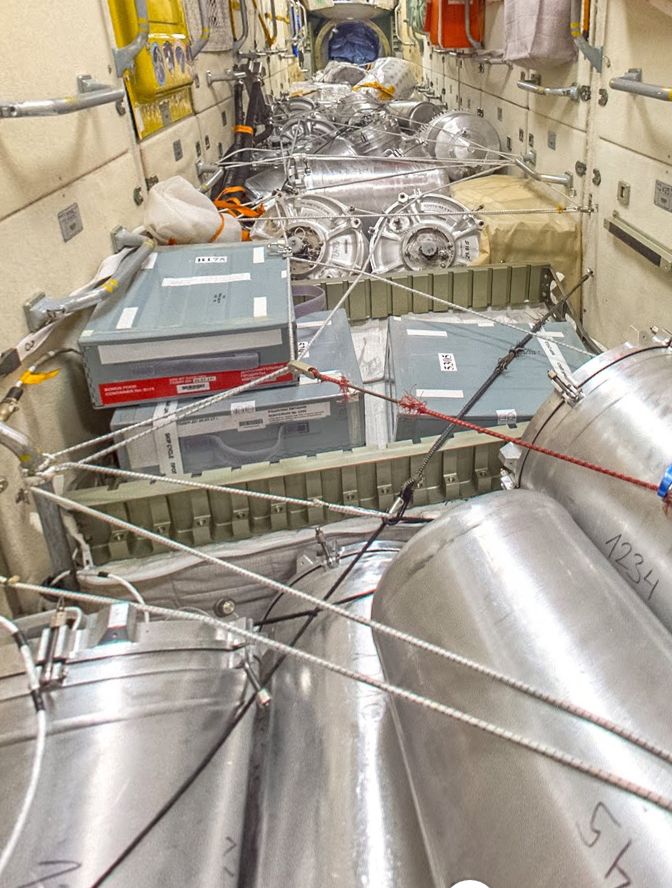 Some of my calculations:

(On the losses side I approximate mass of oxygen as mass of water wherever water is lost; in fact it's 16/18 or 88% but since I'm still not getting anywhere into the ballpark, the 12% error is negligible, especially that counting the lost water as oxygen I'm overestimating the losses.)

Half of that is reclaimed through the Sabatier process. src. 131kg of oxygen vented bound into CO2.

If, as David Hammen claims, the Sabatier process is no longer performed, and the airlock wastes negligible amount of air, that's another 131kg minus 18. We're at 384kg max loss vs 373kg of oxygen brought in as 420kg of water brought with resupply, and it seems everything works out to within the error margin. But that is based on several unsourced assumptions: non-reclaimed fecal losses, Sabatier inactive, airlock pumped down. Could someone confirm? Primarily, the Sabatier process, as it would account for 70% of the losses!

Your premise is incorrect. According to this report, the water recovered from the toilets and ventilation system etc. is used as potable water and not just electrolysed into oxygen.

18
How close is the ISS to a closed system, in terms of carbon, hydrogen, and oxygen?
11
How does the sabatier system reduce water shipments to the ISS?
0
Water Compressed on Space Station

10
How much heat did the Sabatier hardware add to the ISS heat profile?
16
How long does it take to get to ISS?
12
How are hatches set up in the common berthing mechanism (CBM)?
6
Does it get cold in a container in space?
18
How close is the ISS to a closed system, in terms of carbon, hydrogen, and oxygen?
11
How does the sabatier system reduce water shipments to the ISS?
4
How does SpaceX's Dragon get to the ISS?
8
Why doesn't the ISS have more oxygen generators?
3
H2 and CO2 ventilated outboard of the ISS, could become ice flakes in the extreme temperatures outside the ISS?
6
How are the Archival Samples of water on the ISS handled?