Is there an absolute limit to single stage ∆V when tank mass is a fixed faction of propellant mass?

Except that in the real world $M_F$ cannot be divorced from $M_P$. $M_F$ must include the tank(s) to contain the propellant. Conventional wisdom has been that tank mass is proportional to the mass of propellant contained. Assume that the mass of any ancillary equipment involved in properly delivering the propellant to the feed lines, such as pressurant and pressurant tanks, is included in the effective propellant tank mass. Also assume the mass of things such as engines and turbopumps are included with the "inert mass" of the spacecraft bus and don't scale with propellant mass. In that case:

QUESTION: Is there a ∆V limit for a single-stage rocket with propellant tank mass proportional to propellant mass? If so, what is that limit?

The simple answer: yes, there is a limit. Here I derive the equations showing what that limit is.

This is the absolute limit to the ∆V for a single-stage rocket with propellant tank mass proportional to propellant mass. Given a $\xi_T$, this says getting a ∆V larger than that is not difficult—it's impossible!

So that's the answer. But there are some caveats I alluded to in the introduction.

For a significant range of propellant masses it appears from empirical data that tank mass is indeed roughly proportional to propellant mass, as Pietrobon found in his original 2008 publication, "Analysis of Propellant Tank Masses". But when he examined very large systems he found that they wound up lighter than predicted by that linear relation. A later (2009) version of his paper skips mention of the linear model and goes straight to a different model where tank mass is proportional to propellant mass to the 0.856 power. This would change the assumption of linearity that results in Eq. 7, but that model is fairly crude, with not a lot of data at the very large masses, so the power-law relation is far from confirmed.

Equation 7 assumes that nothing outside of the propellant mass and tank mass scales as the propellant mass changes. This is not strictly true. No real rocket engine can burn ("process") an unlimited quantity of propellant. As propellant mass grows unchecked, eventually you have to add more engines or use larger engines that can process more propellant. Either way the mass spent in engines (I include things like pumps and propellant lines in this) increases. If, like the tank mass, the mass of the engines winds up being proportional to propellant mass, then you have a new variable $M_E = \xi_E M_P$ split out of $M_{SC}$, and it gets treated much like $M_T$. $\xi_E$ and $\xi_T$ will add to produce an effective propulsion system mass fraction parameter $\xi_{PS}$ which can be substituted for $\xi_T$ in Eq. 7. Since $\xi_{PS}$ is larger than $\xi_T$, the resulting ∆V limit is smaller. In general, this approach applies to any component that scales linearly with propellant mass.

It doesn't end there. Spacecraft are notorious for the ripple effect: increase the mass of one item, and usually the masses of other things increase as well, and often those increase the masses of still other things. If you increase the number of engines you'll need more structure mass, even if they're not all running simultaneously. If they are all running simultaneously, you'll need even more structure mass, and probably will need more electric power to operate all the engines' valves and such, so more mass in the power system. If you increase the size (thrust) of the engines you'll definitely need more structure mass and more power system mass. The ripple effect says that most likely, the ∆V limit will be even smaller than indicated by the modified Eq. 7.

THere's certainly more subtlety to the answer than is shown here, but this still may be helpful

For those of you who haven't already read The Tyranny of the Rocket Equation by Expedition by 30/31 Flight Engineer Don Pettit, I'd recommend it. The context is single-stage to orbit, but if you look at those velocities, their ratios, and the propellant mass ratios there, then Tom's tutorial comes into even sharper focus: 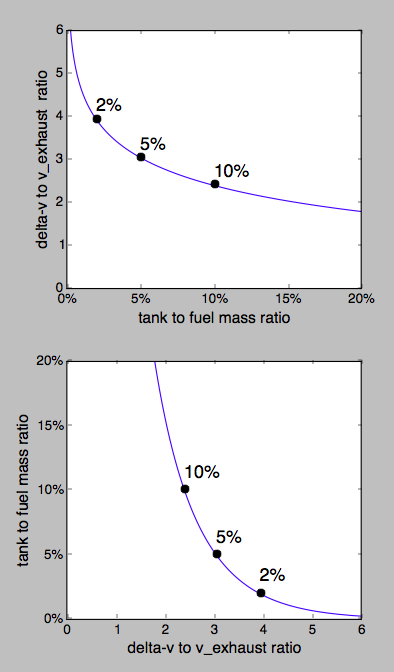 Not the answer you're looking for? Browse other questions tagged propulsion delta-v or ask your own question.

11
Would an ionocraft have better or worse performance in the upper atmosphere?
2
How much energy is required to send a payload of 40 t from Earth's surface to LEO?
16
Pumped propellant propulsion - is it viable?
11
Is it possible to use zinc powder as a NTR propellant?
5
Tsiolkovysky's Rocket Equation
1
Looking for figures for contemporary interstellar engine options
1
For a DAWN-like solar-electric deep space mission, would using propellant particles much heavier than xenon atoms be beneficial?
5
Do lower pressure pressure-fed rockets get more Delta-V?