My son really was upset he missed the launch live, so we re-watched the video at breakfast and I noticed starting at 3:27 in the video a few seconds after MECO, and stage separation, you can see the first stage firing thruster till it goes out of frame around 3:34.

Now I am sure they use the thrusters to make sure they DO not repeat the stage collision from flight 3 of the Falcon 1 launch, but these firings were already after the stage was pretty clear of the second stage.

I am happy to see them using the thrusters, since it means they are doing 'something' with it, even if full recovery testing is not an option due to lack of reserve propellant. (SpaceX said they would not test recovery per se, on flight 2 and 3 of the F9 1.1, since they had booked full reserves to the customers).

I am curious if we know what they were testing. I would be happy to see that they are just exercising the thrusters to determine limits of control at different altitude densities. Every bit of data helps, and the ability to test on each launch means they learn faster.

Immediately after stage separation, (The right side of the split screen showed the M1-D Vac being exposed to space as the stages separated.) Oddly, looking at just the picture, the second stage is actually the object at the bottom in this view. 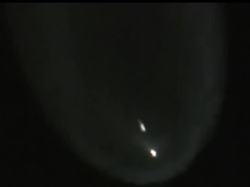 A second or two later, you can see the stages separate from each other.

Then we have a visible thruster firing from the first stage. 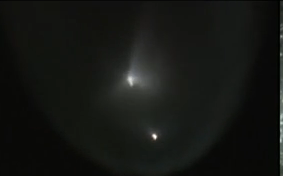 And another firing off to the right. 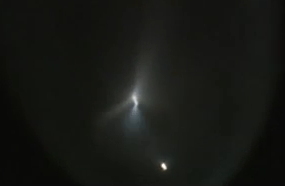 And another this time, sort of down and to the left. 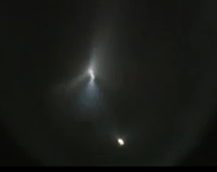 This one was hard to capture, but it pulsed its firing 3-4 times. The same direction as the previous one. Down and to the left.

An article at NASASpaceflight.com reported that:

So sources (unidentified in the article) suggest something was tested. That is the info I am looking for in this question.

NasaSpaceflight.com thread suggests that they did use the ACS to test orienting the stage, but did not actually relight the engines.

From Elon Musk, via NasaSpaceFlight.

Bottom line is, if they tried anything, it was a very small attempt, and they won't try it completely until CRS-3 again. There are rumors that I've heard that there was an attempt to simply restart the engine multiple times, but that there was only a few seconds of fuel in the rockets. Not sure what else if anything there was today on the matter.

Not the answer you're looking for? Browse other questions tagged spacex reuse falcon-9 or ask your own question.