How to understand this complicated plot for Mariner 4's mid-course correction (to Mars)?

The 2015 DrewExMachina blog post Mariner 4 to Mars has an interesting looking plot! Below is the associated text, and the image caption.

But I still do not understand all of the lines and labels in this plot.

Question: Is it possible to dissect this and explain all of the information that's shown here, and possibly identify the original source document for further reading?

Initial tracking of Mariner 4 showed that it would miss Mars by 246,378 kilometers. The spacecraft had been purposely aimed away from Mars to minimize the chances that its unsterilized Agena D upper stage would impact Mars and contaminate it. At 16:09 GMT on December 5, Mariner 4 fired its course correction engine for 20 seconds at a distance of 2.034 million kilometers from the Earth to change its velocity by 17.3 meters per second. This single burn was enough to place Mariner 4 on course for a flyby 9,600 kilometers above the surface of Mars. The aim point was carefully selected to avoid passing into the shadow of Mars or block Mariner’s view of Canopus while at the same time pass behind Mars as viewed from Earth while avoiding the moons Phobos or Deimos during the photography session.

below: "Diagram illustrating the aim point of Mariner 4 past Mars after its midcourse maneuver on December 5, 1964." Credit: NASA/JPL click for full size 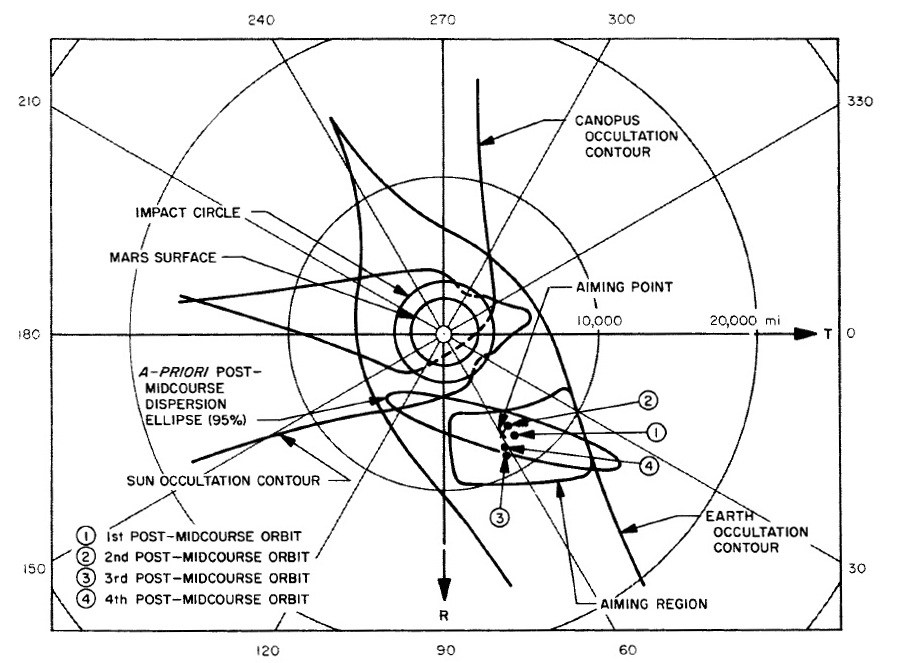 I have not a definite answer, but here's what I have gathered so far.

I'd say most of the lines are the boundaries of areas where you do not want to go:

Earth occultation contour is probably a place where you want to go [as stated in the question, we want to "pass behind Mars as viewed from Earth"].

So you want to be in Earth occultation but not in the other areas. Within this requirement, an aiming region is selected and and aiming point is chosen.

Based on the aiming point, an a-priori dispersion ellipse is drawn (where we might end up after our midcourse burn aiming for that point]. Then a few more point are drawn after the midcourse correction that confirm we succeded in the burn (we are close to aiming point and indeed within the expected dispersion).

All of the previous is in accordance with the description of the image given in the following articles:

Guidance and Control of the Mariner Planetary Spacecraft

Navigating The Mariner Spacecraft to Mars

A Review of the Mariner IV Results

As an example, the last one says:

Figure 4 also shows the nature of the aiming constraints. In the zone above Mars the view of the Canopus sensor would have been blocked, with the result that the sensor would have lost its reference on Canopus. The zone to the left is the region in which the spacecraft would have lost sight of the Sun and, consequently, would have lost power and an attitude control reference. The small rectangular zone beneath the planet is the area in which all the experiments were designed to perform satisfactorily, and thus it was the desired target area. It extended outward from the planet's surface from about 1600 kilometers (1000 statute miles) to about 16000 kilometers (10000 statute miles), and was bounded within the zone which allowedthe spacecraft to disappear from view of the Earth behind the planet, that is, to be occulted. Occultation of the spacecraft caused the radio-frequencysignal to be transmitted briefly through the Martian atmosphere, and analyses of change in amplitude and frequency enabled a determination of atmospheric density and its distribution with altitude above the surface of the planet.

Still this does not tell us what the axis of the plot mean.

My guess is that it's in "polar" coordinates, distance from the center is distance from Mars center, while the angle maybe it's something like if you are going over the pole of Mars or something else.

Indeed, the first article says that:

The second attempt at the mid-course maneuver [...] was completely successful [..] reduced the miss distance from 158,679 to 5,729 miles from the surface.

The distance from the center of the plot is compatible with the 5,729 miles figure when we look at the scale on the T axis.

A first read of the first article also suggests the angle coordinate might be related to the terminator, see figure 3 about Mariner II and Venus.

So I suggest that overall the plot could be distance and angle when passing through a terminator plane (still not sure what would be the zero or the "up"/270 degrees - i.e. I am not sure how to read it).

Not the answer you're looking for? Browse other questions tagged mars nasa mariner or ask your own question.

4
What's the planetary exploration word for "impact parameter" (distance of closest approach if gravity were "turned off")?
2
Do you recognize these space artists who made this (possibly) first "paint-by-numbers" image of Mars?
2
Where can I find the specific details of a gravity assist space mission?

0
Is this a first Mars aerobraking for ESA, or for anyone?
9
How is a Deep Space Gateway station in Lunar orbit helpful for going to Mars?
7
How to size Solar Array for Mars Surface
3
How to use this Google Mars viewer to find this Martian landslide event?
6
How was the radius of Venus measured so accurately (± 3 km) via radar in the mid 1960's, before Venera 4 and Mariner 5?
5
What is this retroreflector on the Mars InSight lander used for?
2
How would this two-stage Mars Ascent Vehicle work? Where do you sit?
3
When going to Mars, how do you measure exact distances to determine course corrections?
3
How should I understand these phrases in this paper on orbit transfers?
1
Trying to understand if or how operating a rover on Mars from Earth could work