Why can't you just parachute down right from orbit?

This will surely seem, at least at first sight, a completely stupid idea, seeing the usual “space isn't high away, it's fast away”, and that the heat shields which actually are used need to withstand temperatures around 2000°C. I certainly can't expect a parachute to withstand such violent conditions?

No I don't, however I also don't quite see why it would need to: the standard idea behind reentry seems to be that the more drag you develop, the less heat you need to withstand – thus the blunt shape of reentry vehicles, or else lifting-body capability. A parachute would create much more drag than any reentry capsule, so it would do most of the braking very high up in the atmosphere where the density is still extremely low. Even there, it would gather a “cushion” of air inside it, that should divert most of the actual air from touching the chute itself. And the heat the parachute does capture would be radiated away much better than from a small heat shield because of the large surface area. Basically, every square centimeter of the chute would be responsible for slowing down only a small fraction of the capsule's mass and thus of its kinetic energy.

This way of thinking seems to be also popular at JP Aerospace, whose orbital air ship is supposed to descend simply by re-entering the upper atmosphere and thus getting slowed down without damaging the extremely delicate structure. (Somewhat discussed here.)
Mind, I have a lot of doubts if this air ship is actually plausible; OTOH parachutes are a mainstay of spaceflight – but they were always only used after the vehicle had slowed down from the hypersonic entry, or in case of the Shuttle only on the ground.

Is there a fundamental reason for this, other than “slow boring descent” or “just has never been tried”? I'm sure that somebody must have considered it in the early days of spaceflight.

I seem to have not properly explained why “too violent deceleration” should not be an issue here. Some curves for the process, using the script by uhoh from the other question: 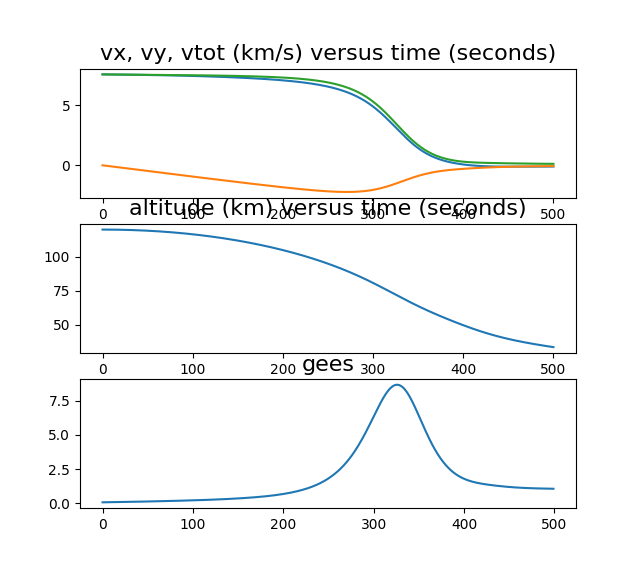 Sure, that's a strong braking like any reentry is, but it's definitely survivable. And this is still just with a single parachute with zero lift-to-drag ratio.

What's crucial here is to actually start out at near-orbital velocity, so the initial entry angle is shallow. It will inevitably get steeper when the speed is reduced, but at that point the speed is already reduced, so...

What would further help is to tweak the drag during entry, to avoid the strongest peaks. The easiest way would be to use different-size chutes at different heights (which, as Uwe comments, would probably be necessary anyway). Or to actually add some lift, which also doesn't seem completely implausible (paraglider).

Another factor: Acme delivers you an unobtanium chute that can take all the forces involved. What happens?

Your objective is hard braking at high altitude. You slow down, you're not in orbit anymore, you start falling. You have to shed your velocity before you get too deep in the atmosphere. How much time do you have to do this? Very little! You need to shed something like 9,000 m/s before you get too low. That's about 1000 g-seconds. You want to keep it down to 10g (pretty hazardous) and you have to take at least 100 seconds. You don't have that.

(Handwavy instead of quantitative... Would be nice to have some better numbers)

The fundamental reason is that there are currently only three techniques to keep you or your craft from hitting the ground: stay in orbit, aerodynamic lift (flying/gliding/parachute/ballooning), and direct rocket propulsion. Rockets as we can build them are out because it takes too much fuel mass or the thrust/weight ratio is too low. The other two can't be used at the same altitude.

You don't say so explicitly, but I imagine you are thinking of a "normal" parachute as would be used in the atmosphere at slow speeds and instead using it high enough up that the reduced density provides reasonable loads (1-3g) so that the engineering and costs aren't more complex than the heat shield.

What would be nice is if at the top of the atmosphere there were a regime where we could simultaneously support our weight (so we don't fall into denser regions) and not burn up from the speed. If so, our craft could stay there, slowly losing energy, and then descend further when the speeds got slower.

JP Aerospace hopes notwithstanding, that doesn't happen. You could identify an altitude where your (orbital) speed isn't an immediate thermal problem, but there's just no way to use the atmosphere at that altitude to support your weight and stay there. Whether you have a gas envelope, wings, or a huge parachute, you're still going to be going really fast as you continue to descend into exponentially denser air. Now the loads and temperatures climb rapidly and you leave the region where a normal/simple parachute is possible.

A parachute would create much more drag than any reentry capsule, so it would do most of the breaking very high up in the atmosphere where the density it still extremely low.

A larger envelope would generate larger drag, but nowhere near enough to reduce speeds way high up.

Even there, it would gather a “cushion” of air inside it, that should divert most of the actual air from touching the chute itself. And the heat the parachute does capture would be radiated away much better than from a small heat shield because of the large surface area.

Blunt bodies are already fairly efficient at dissipating heat. This NASA document suggests that 90% of the thermal load from them is removed by the bow shock. Only the remaining 10% has to be dealt with by materials. The envelope would have to be even more efficient than that to be useful. I suspect that the cables which must penetrate the bow shock will be interesting engineering challenges.

You want to "do most of the braking very high up in the atmosphere where the density is still extremely low" using a parachute?

If you want to leave orbit and stay high up in the atmosphere until the reentry body is slow, you need a wing instead of a parachute to generate the lift force neccessary to stay high during slow down. You got to replace the decreasing centrifugal force by increasing aerodynamic lift.

This wing should work in a very thin atmosphere over a very large speed range from hypersonic to sonic or even subsonic. The wing should have a gigantic area and should adapt itself to the speed by modification of shape and area. The lift-to-drag ratio should be very good to loose height slowly.

You would need a magic process to transfer the heat to a very thin atmosphere without heating the parachute, wing or paraglider too much. The transfer to heat should be done in a short time before entering the denser parts of the atmosphere.

Technically speaking, USAF Col. Joseph Kittinger did parachute from near-space during Project Excelsior in 1959-1960. He ascended in a balloon and descended by parachute, over several missions, the highest of which was 31 km (19 mi) above sea level. In 2012, Felix Baumgartner broke the record with a fall of 39 km (24 mi), and reaching a speed of Mach 1.25. Although neither record is above the 100 km Karman line of "space", it demonstrates that altitude itself is not an issue.

Practically speaking, velocity does matter, as the question points out. These attempts were glorified skydiving, and didn't have to deal with the orbital velocity that a spacecraft has. Parachuting from space should therefore be regarded as a stunt rather than a practical and reliable way to return people from orbit.

Addendum: The was also a proposal called the MOOSE:

The design was proposed by General Electric in the early 1960s. The system was quite compact, weighing 200 lb (91 kg) and fitting inside a suitcase-sized container. It consisted of a small twin-nozzle rocket motor sufficient to deorbit the astronaut, a PET film bag 6 ft (1.8 m) long with a flexible 0.25 in (6.4 mm) ablative heat shield on the back, two pressurized canisters to fill it with polyurethane foam, a parachute, radio equipment and a survival kit.

However, the MOOSE system was nonetheless always intended as an extreme emergency measure when no other option for returning an astronaut to Earth existed; falling from orbit protected by nothing more than a spacesuit and a bag of foam was unlikely to ever become a particularly safe—or enticing—maneuver.

Neither NASA nor the U.S. Air Force expressed an interest in the MOOSE system, and so by the end of the 1960s, the program was quietly shelved.

24
Why not increase contact surface when reentering the atmosphere?
20
Could one skydive from a space capsule that just had a parachute failure during re-entry?
16
Could you take a Cessna from the ISS to Earth?
9
If there was a non-rotating skyhook in Earth orbit, what would re-entry be like after dropping from its foot?
0
Could a reentry powered monorail and flywheel make a kinetic engine for lift?
2
While descending from orbit, can a blimp glider skip an atmosphere to shed speed?

25
Gliding into the atmosphere
18
Can a reentry be done slowly?
19
Does the FAA still license the people who fold human-rated reentry parachutes?
8
Galileo Probe Altitude Data
20
Could one skydive from a space capsule that just had a parachute failure during re-entry?
3
Did the Apollo Command module really "skip" within, or off of the atmosphere as a part of its reentry program?