Have there been any other cheap, modular launcher designs like the OTRAG?

The OTRAG rocket is an interesting design. Vehicles would be assembled from 4 to hundreds of identical rocket modules. By using an extremely simple design, producing the modules cheaply using economies of scale, and not bothering with recovery and refurbishing, it was expected to be 1/10 the cost of similar vehicles. (Basically, the exact opposite of the shuttle's philosophy.)

The Wikipedia article is a fascinating read of what can be done with a simple, clever design.

It appears that the program failed entirely due to geopolitical reasons. OTRAG was a German company, and France and the Soviet Union did not want Germany to have another rocket program. The launches occurred in Congo and Libya, both run by dictators. The owner of OTRAG did not want to give 50% control to Americans, which would be legally required for U.S. assistance. Nonetheless, there were 18 test flights of the concept. The linked page claims that it was human-rated (if that can be believed).

Have there been any other launch vehicle designs like the OTRAG? Specifically, the vehicle should be (1) built of modular units and (2) non-reusable. So for example, the Ares family would qualify for the former but not the latter.

The Conestoga launcher is the only similar design I know of, in that it involved clustering large numbers of identical boosters. The bigger the payload, the more boosters. Unlike OTRAG the boosters were solids.

There were two flights, the last one was a failure. Although not orbital, the first one reached space. The 2nd one used the clustered configuration, the first flight didn't. The 2nd flight was an attempt to orbit a payload. 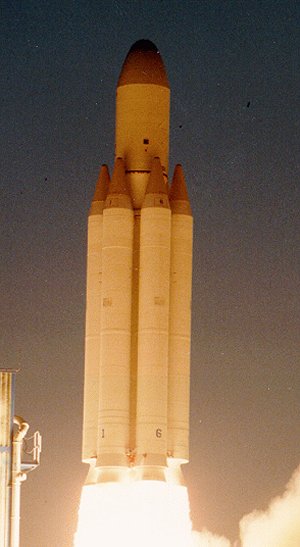 As far as I know Besides the solid-rocket Conestoga, there have been no launcher designs even remotely similar to OTRAG that got anywhere near full-scale testing.

Falcon 9/Heavy, Delta IV/Heavy, their corresponding "superheavy" (4-6 booster) concepts, and the Angara family (0, 2, 4, or 6 boosters) are all based on using similar core-and-booster stages, but the commonality ends with the first stage; OTRAG instead starts with the uppermost stage (or rather, a fraction of uppermost stage) as the unit of commonality.

Soviet UR-700 and UR-900 were the projects of modular superheavy rockets, but never implemented. Only single-core Proton launcher became operational.

Wiki page about UR series

Not the answer you're looking for? Browse other questions tagged rockets launch-vehicle otrag or ask your own question.

13
Has there been any nuclear thermal rocket test program after NERVA?
8
Why did NASA design the SLS do the job of both the Ares I and Ares V?
1
Has the use of any commercial launch vehicle's engines on an unrelated vehicle ever been seriously considered?
12
Was there any period of time when other U.S. launchers were abandoned in favor of the Shuttle?
4
Have there been any examples of re-usable rockets in the past?
9
Why aren’t rocket stages modular and interchangeable?
4
Is the space shuttle the only launcher that jettisson tank without any engines in its staging process?
16
Have there been any rockets that run seven engines at the same time?