What is astronaut Alexander Gerst signaling with this K-shaped hand signal?

In this AP/WISN news item Air leak at International Space Station temporarily plugged by a thumb they show a file photo of German astronaut Alexander Gerst at the Baikonur cosmodrome, making what looks like a gesture with his two hands, possibly forming the letter "K".

Question: What does it mean? Are there many hand signals used on the ISS? Is there a standard reference for such? 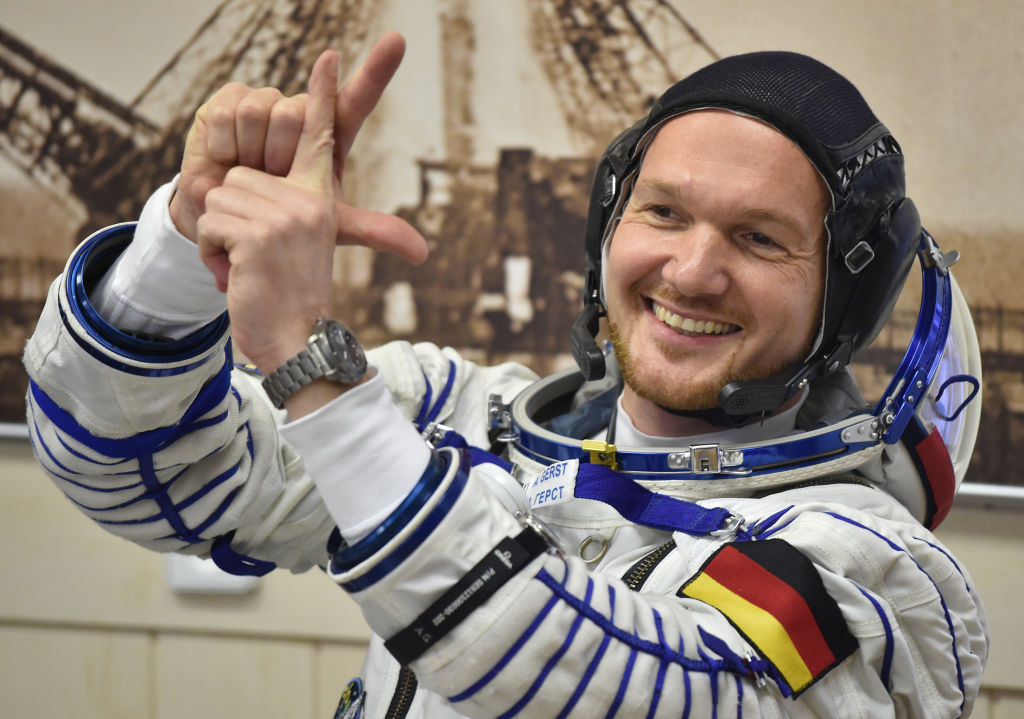 Update: At this point I have reviewed the only video i can find of the time of his hand signal.

The point in time is when he is seated, awaiting his turn for the leak-check of his suit, (helmet and gloves will be fitted, hence his skull cap is ready, and his blue ventilation box is by his side).

His commander (Sergei Prokopyev) is undergoing the test, his other crew mate (Serena Aunon-Chancellor) will be after Gerst.

His seat is right at the back of the room, nearest the door he came in from, after suit fitting.

At great distance is the glass separator, in the middle of the room, with crew family & friends and press on the other side.

The crew can only talk verbally when they are closest to the glass screen (with the mic) after completing their leak check.

So during this time, if they want to communicate with their family & friends, they are using hand signs or other forms of non-verbal communication.

(Whilst waiting, Gerst also talks to his back up crew, and towards his family (and bearded friend) he gestures to his legs and also talks to support staff about his ventilator box)

So, it might really just be a gesture known only between himself and his family (and the bald chap with the beard who seems to be a close friend).

And.. it might be a reference pertaining to the surprise appearance to play along with Kraftwerk later on during the mission..

ok, not with any real source other than this and a number of other bits of speculation: 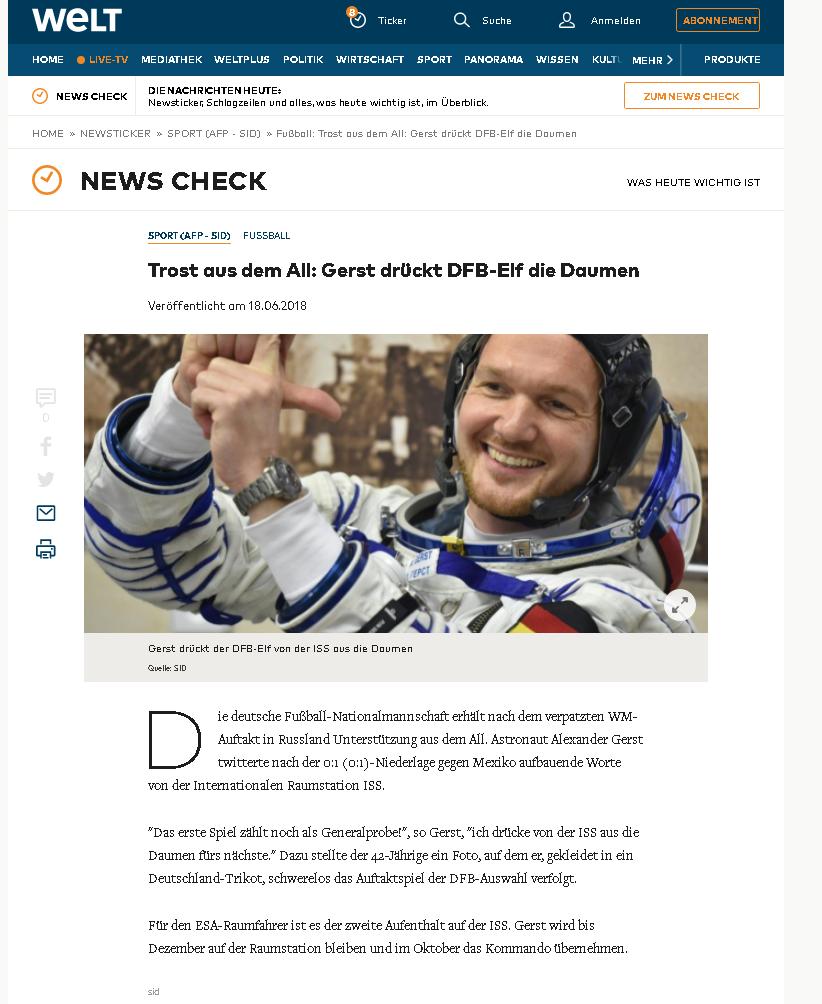 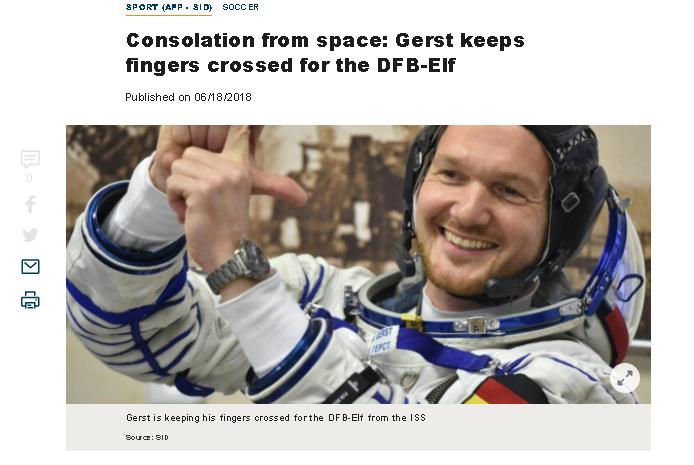 which was referring to 2018 FIFA World Cup football match between his home country Germany and Mexico, which he then watched from the ISS.

...and then we get to my speculation:

He hails from Künzelsau, Baden-Württember in Germany, and in honor of his achievements and what he means for his home town he was made an Honorary Citizen of the city and an observatory was built in his name. 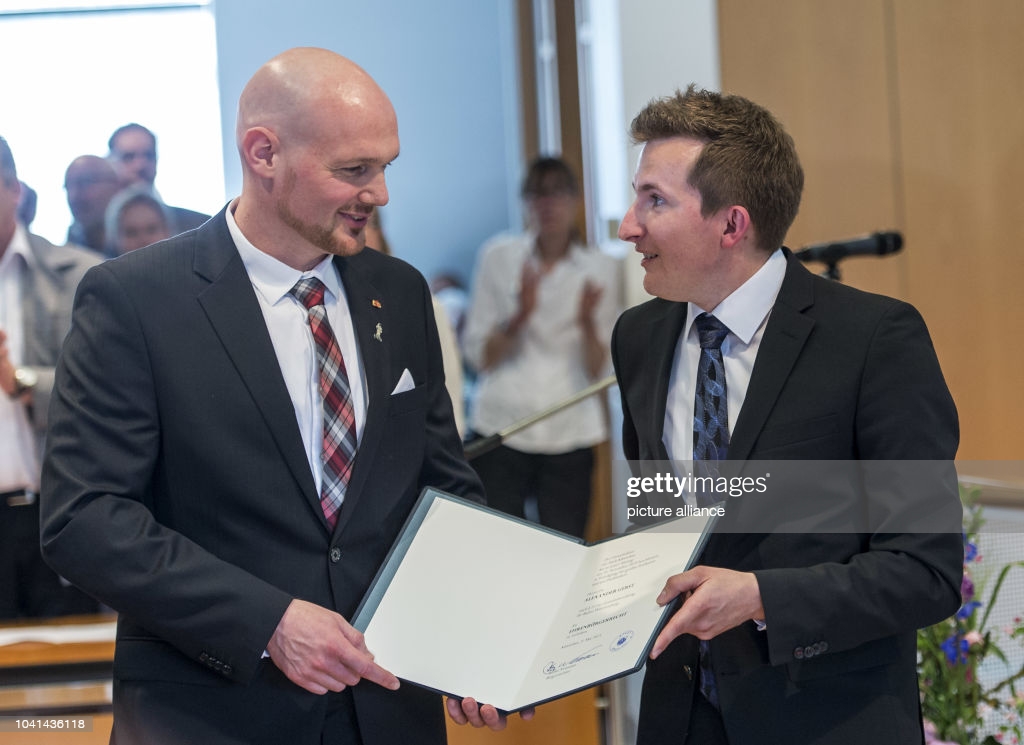 He received a Welcome Home party there after his second mission.

He studied at Karlsruhe Institute of Technology, and unfurled and displayed a special KIT banner whilst on the ISS.

German electronic music group Kraftwerk, of which Alexander is a fan, had a lo-fi K as a logo early in their career, and Gerst made a surprise appearance from the ISS when Kraftwerk performed at a festival in Stuttgart in 2018.

After both Gerst and founding member Ralf Hutter addressed the crowd they then played a special duet version of the track 'Spacelab', for which Alexander had a tablet computer configured with virtual synthesizers on board.

I guess you can see where I went with this...

His other half's name starts with L though.. :/

(and doesn't seem to be a krautrock or gang sign either..)

K might be short for Klaar ("Clear" in German) but:

It's the wrong way round from his perspective;

If we had this as a video clip, I believe we would see him make an O shape immediatly beforehand.

Not the answer you're looking for? Browse other questions tagged iss communication astronauts baikonur-cosmodrome or ask your own question.

13
Do ISS astronauts occasionally let the sunshine in for a natural light "fix"?
2
What is the ESA Grip experiment, and why does it require Alexander Gerst to be strapped into it?
17
Was Alexander Gerst the first man to have bare skin exposed to the vacuum of space and live?
9
What is this huge, red, blinking light structure on Earth seen from the ISS in this video?
2
What freedom of movement does an untethered, thrusterless astronaut have? - with a 20lb sledge
8
What is this diagram shown during Dragon docking with the ISS?
8
What is the blue and purple glitter dinosaur above NASA astronaut Robert Behnken in this video?