How could an object barely exceeding escape velocity from the Moon eventually reach the Earth?

Since NASA is once again targetting low-cost missions to the Moon, I was thinking about low-cost methods of getting stuff from the Moon back to Earth.

Although it seems reasonable to assume that anything sent to the Moon that we don't need back will simply be left there, I was wondering about the cheapest method of getting stuff back.

Let's say a cargo container filled with Lunar regolith, or t-shirts with a catchy logo ("NASA went to the Moon and all they sent back was this crappy t-shirt")

Assuming travel time is no real concern, could a single-stage rocket ejecting the vehicle from the Moon make the journey back to the Earth with no other propulsive aids, or would it simply get lost in space?

Is there a way that I could get my promotional t-shirt using the least possible amount of propulsion to get away from the Moon?

Barely achieving escape velocity means you take a parabolic orbit. The thing with parabolic orbits is that they actually approach zero speed as you depart to infinite distance from the starting body.

Actually though, parabolic orbits only exist in a true 2-body system. In reality, you don't keep reduce your speed to zero, because the Earth isn't that far away and immediately will influence the orbit. In particular if you start tangentially away from the forward-facing moon surface, heading away from Earth, then the retrograde-facing parabolic escape will give Earth time to “pull the spacecraft closer” while it has less than the Moon's speed. As a result, the orbit will actually have a substantially lower perigee than the Moon:

You could now cleverly fine-tune this so after four orbits or so, you get another close approach to the moon that will then slingshot you right into Earth.

But since neither the Moon or Earth are very massive, it's actually more practical to just pack in some extra $\Delta v$, to start out with a hyperbolic trajectory from the moon. Example with $v_0 = 2572\mathrm{\tfrac{m}s}$ (escape velocity is $2375\mathrm{\tfrac{m}s}$): 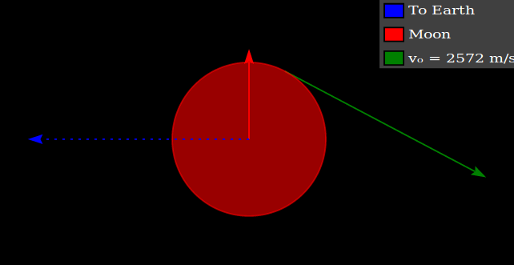 View of the same trajectory from the Moon:

Sorry for the bad quality GIFs, I can't seem to get them reliably optimised to be accepted by imgur in any other way.

It would be lost in space.

If you barely reached the moon escape velocity, it means that your object will reach an orbit somewhat similar to that of the moon.

From there, the orbit will be unstable due to earth/moon (and other bodies) interactions. It might take the cargo back earth, back to the moon, or in deep space. Predicting accurately theses orbits is difficult, and unreliable on the long term.

You can read more about delta v budgets on wikipedia.

Barely achieving lunar escape velocity means when you stop thrusting you're now on an elliptical orbit that overlaps the moons orbit but certainly doesn't dive deep enough in the earth/moon system to actually be captured by earth's atmosphere.

You'll orbit that way until the moon comes back around and you do one of three things.

The odds of that slingshot effect getting you to earth safely are pretty minimal.

Source: Repeatedly had it happen to me while time-lapsing in Kerbal Space Program

If you take the eliptical orbit from the Moon surface, then no, at the escape point your speed will hardly differ from that of the Moon and your sample will orbit there indefinitely.

Buuut.... if you escape the Moon from the highest possible retrograde Moon orbit...

Orbital speed around the Moon there: 0.29km/s src

Escaping, with infinitesimal burn, in retrograde direction, at the far point, you'll land in Earth orbit, at apogee of 442500 km src

It should be possible, given enough time and very careful navigation. You might need to do a little better than "barely" escape, but you would not need to propulsively lower your Earth periapsis significantly below the Moon.

Over a period of years, possibly many years, you would need to arrange for swingbys of the Moon to crank up the eccentricity of your Earth orbit until you enter the Earth's atmosphere.

How long it would take would depend on how often you are able to reencounter the Moon. That is where you would want to not "barely" escape, since that would increase the time between reencounters.