Did NASA “publish”, then “delete” this and other photos of the ISS leak?

A tweet by @NASASpaceflight (Chris B - NSF, "Managing Editor of NASASpaceFlight.com" says:

Top Russian news site RIA NOVOSTI reported - via sources but apparently confirmed by Mr. Rogozin - it was a drill hole.

and shows this photo (cropped, original available at https://i.stack.imgur.com/rhZn8.jpg as well as in the linked tweet).

Question: Did NASA "publish", then "delete" this and other photos of the ISS leak? If so, where did these actions occur? (note: I'm only asking this.)

The appearance certainly contrasts with the file photo shown in the earlier tweet by Chris Hadfield (discussed in Is there, or has there ever been anything remotely like an electron microscope in space?), which says "When your spaceship suddenly starts leaking air..." (emphasis added)

A question about how "sudden" the leak was would be an excellent follow-up. 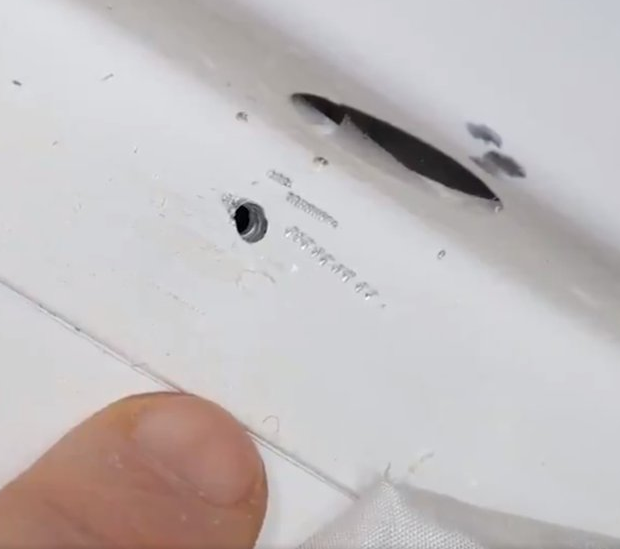 I first read about the @NASASpaceflight tweet in The Guardian's Station Space station air leak: someone drilled the hole, say Russians:

The article is worth reading in its entirety. This is a snippet:

Dmitry Rogozin said the hole detected last Thursday in a Russian Soyuz module docked at the ISS was caused by a drill and could have been done deliberately, either back on Earth or by someone in orbit.

“There were several attempts at drilling,” Rogozin said late on Monday in televised comments, adding that the drill appeared to have been held by a “wavering hand”.

“What is this: a production defect or some premeditated actions?” he asked. “We are checking the Earth version. But there is another version that we do not rule out: deliberate interference in space.”

A space industry source told TASS that the spacecraft could have been damaged during testing at Baikonur cosmodrome in Kazakhstan after passing initial checks and the mistake was then hastily covered up.

"Someone messed up and then got scared and sealed up the hole," the source speculated, but then the sealant "dried up and fell off" when the Soyuz reached the ISS.

Browse other questions tagged iss nasa leak or ask your own question.

17
Was Alexander Gerst the first man to have bare skin exposed to the vacuum of space and live?
18
Does the Soyuz spacecraft use chemically stabilized hydrogen peroxide (H₂O₂) to remain ISS-dockable for 200+ days?
6
Is there, or has there ever been anything remotely like an electron microscope in space?
4
Potential catastrophic death on the ISS from mistakes

19
Why do they believe that the Bigelow Expandable Activity Module has “taken a hit”?
32
Has the ISS ever not had a lifeboat?
3
Is this ISS artwork old but accurate? Was there a radiator that looked like this once?
24
How could the 2018-08-30 Soyuz MS-09 / ISS leak be so slow?
10
With six spacecraft currently docked at the ISS, how could Santa (or anyone else) deliver presents?
3
Where is the hole now? (ISS/Soyuz spacecraft hole)
9
Are there really “Dead End” signs on the outside of the International Space Station?
18
Tea bags to find the leak on the International Space Station?