What is happening in this photo of a glowing plume behind STS-70 and how was it taken?

A recent tweet by @NASASpaceflight about STS-70 deployment of TDRS-G (TDRS-7) says:

Terence T. Henricks commanded her 21st launch and the last of seven shuttle missions to carry a Tracking and Data Relay Satellite (TDRS) - which were vital for Shuttle/Earth comms, and still are today for the ISS.

The last of four file photos is the one below. What is happening here? What kind of exhaust is this, and in what direction is the thrust? It looks like it's going straight "up" but without depth information it could be "back" as well. Also, what camera might have taken this photo, and where would it be? 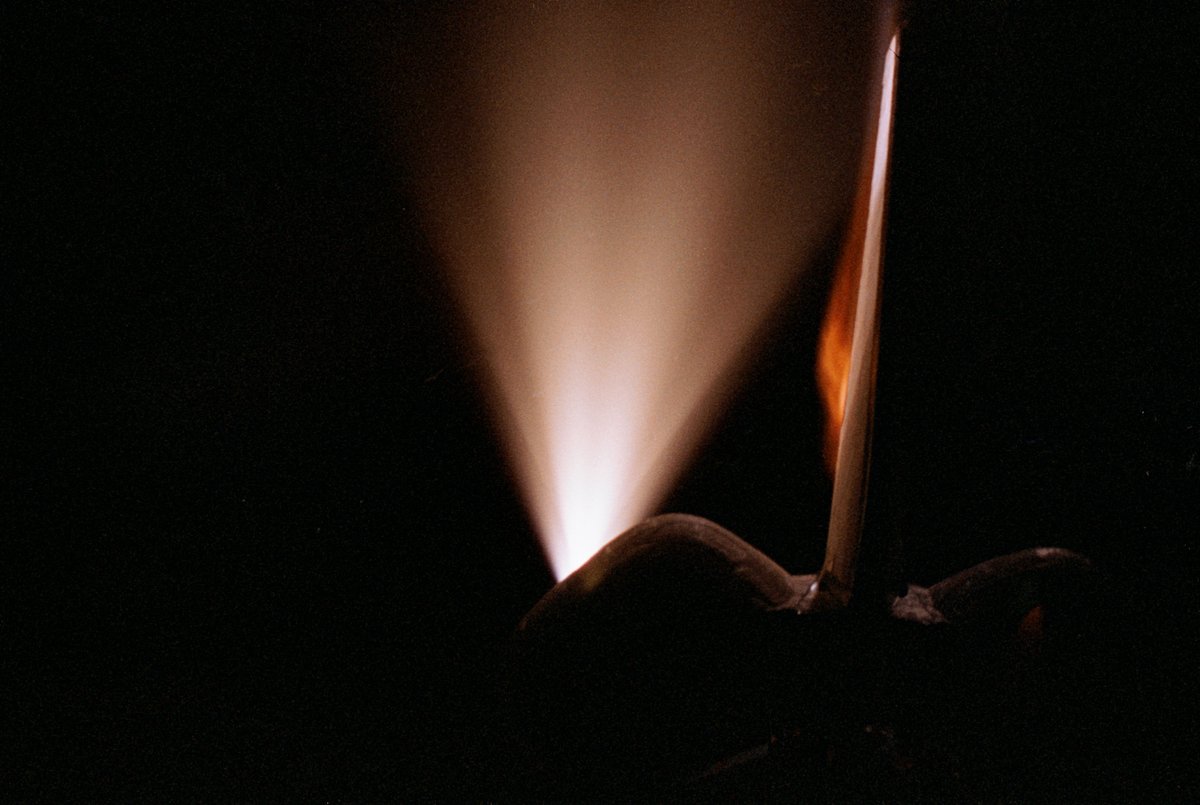 What is happening here? What kind of exhaust is this, and in what direction is the thrust?

The photo shows the exhaust plume(s) from the upward-facing RCS thrusters on the right-hand OMS pod. There are three R-40A thrusters in that position.

I think the plume is backlit by the sun in this shot, while the body of the orbiter is in the shadow of its own wing; I'm not sure what the orange glow around the vertical stabilizer is. It looks firey, but I've never seen any indication that the stabilizer gets scorched during flight, and such RCS firings are frequent. Possibly some kind of shockwave interaction with the exhaust reflected off the stabilizer?

Nearly half the exhaust product of MMH/NTO combustion is water; the visible plume here is largely made of condensed water droplets and/or ice crystals. Some amount of unburned MMH and NTO would also be present in the plume.

It looks like it's going straight "up" but without depth information it could be "back" as well.

There are rearward-firing RCS thrusters on the pod, but from this angle the plume from those would appear nearly circular, rather than conical, and largely masked by the OMS pod.

Also, what camera might have taken this photo, and where would it be?

This would be a handheld camera operated by a crew member at one of the aft viewing windows on the flight deck. Jenkins says Hasselblad 500EL/S 70mm and Nikon F4S 35mm SLR cameras were normally carried. I don't know if there was a camera mounted in the payload bay itself, but if so it would have been a relatively low-resolution CCTV camera.

Not the answer you're looking for? Browse other questions tagged space-shuttle imaging or ask your own question.

5
What does the exhaust plume of a rocket look like in vacuum?
7
Exhaust products of hypergolic propellants

17
What was the space-worthiness determination procedure for STS-1?
7
What was the design and/or results of the fish experiement onboard Space Shuttle Columbia disaster mission STS-107?
8
How was this image of the sun taken and what does it show?
13
What are the “crossing beams of light” in the Cassini images taken during Enceladus plume flyby?
7
Which STS mission raised the normal engine throttle above 100%, and what change to the SSME made that possible?
8
What is making the glow from this image of STS-135 going home, de-orbit burn or re-entry?
19
After the loss of Challenger, why weren’t Galileo and Ulysses launched by Centaurs on expendable boosters?
6
Where exactly on Mars was Curiosity when this image was taken?