What is the shape of a space elevator?

When we think of a space elevator, we might usually think of a purely vertical tower, sticking perpendicular to the surface of the Earth, extending way past the geostationary belt, to the end-mass.

But... Your 'typical' space elevator will not be a rigid structure, and is certainly subject to different forces than even a mile-tall tower!

So, what does the profile of a space elevator look like? Does it look like a big ball of mass at the end of a string, being pulled around by the Earth (so that the sub-satellite point of the end-mass is to the west)? Is there some orbital mechanics dark magic going on, that the mass is to the east?

To address the overall shape of the elevator (straight, curved etc.), for the vast majority of the length of the elevator there are only two forces, the inward force of gravity and the tension in the cable (which may be inward or outward): 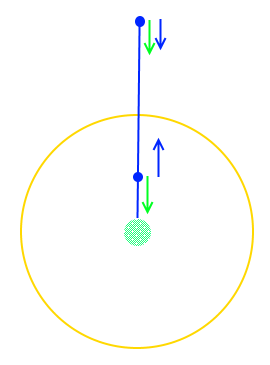 (Forces not to scale)

As the length of the elevator shouldn't be changing, nor should the speed, the motion is circular. There are no sideways forces to drag it out of shape, so it is a perfectly straight line.

However this ignores a few things: Wind/storms in the atmosphere: These only effect the first few tens of kilometres of the elevator. Even if the elevator were free to move at the base and were blown (or shifted to avoid the wind) many kilometres away to avoid them it wouldn't perceptibly change the overall shape.

Forces due to the payload: These forces are quite complex as the payload makes its way up the elevator. They may even cause waves to propagate along the length. A similar whipping motion has been suggested to avoid debris etc. However, the mass of the payload would be small compared to the whole elevator, and any deviations would be small enough that they would be imperceptible on the large scale.

A more in depth look at some of these forces can be found here: https://www.engineering.com/DesignerEdge/DesignerEdgeArticles/ArticleID/14680/3-Challenges-for-Engineering-A-Space-Elevator.aspx

That page also mentions a proposed shape of elevator that might interest you: a rotating elliptical elevator! So perhaps there are some other shapes you could have.

I'm not sure if this is also part of your question, but the actual structure of the elevator itself would vary in thickness, being thickest at the centre (geostationary orbit) where the tension is greatest and tapering towards each end.

I don't believe it can be rigid. The forces would destroy it. Imagine more like a weight tied to a string swung around your head. The weight would be the space station and your the earth. As far as I know, there is nothing yet that can handle the tensile strength needed. Plus there will be vibrations as the string travels through the atmosphere.

Not the answer you're looking for? Browse other questions tagged orbit space-elevator or ask your own question.