How are fuel tanks filled with cryogenic hydrogen?

Cryogenic hydrogen can react with the atmospheric Oxygen to produce an explosion:

as well as being cold enough to liquefy (and possibly solidify) atmospheric oxygen, which can be an explosion hazard.

If we start pumping fuel in when the tanks are made (I believe the inside chamber is not vacuum), it will explode. If the inner chamber is kept in a vacuum, the atmospheric pressure would crush it. So I assume that they do not suck the inside atmospheric air (Am I wrong?)

So my question is this: What process is currently used by space agencies to fill tanks with cryogenic hydrogen?

NASA has done an extensive report on this, and in fact, cryogenic hydrogen tanks are considered to be one of the greatest technical achievements that NASA managed. Much of this is specific to the Centaur upper stage, but here's a few interesting quotes from the article:

Bossart led Mrazek out into the factory yard, where a Centaur tank stood gleaming in the sunlight. Mrazek asked, “What’s inside it?” To which Bossart responded, “Nitrogen.” Nitrogen was used for pressurization until the rocket was filled with its liquid-hydrogen/liquid-oxygen propellants just prior to launch.

One of the most onerous was a fluid systems interface and the special requirements for dumping the liquid-hydrogen propellant if the mission had to be aborted. In late 1984, Johnson released a Centaur Safety Waiver (WACR-1A) that requested a redesign of the fill, drain, and dump vent system. The problem it wanted addressed was the placement of the liquid-hydrogen and liquid-oxygen vent line inlets below the propellant liquid level in case of a mission abort.

Bottom line is, the rocket was filled with Nitrogen prior to filling. I can't find a source for it. They might have put Helium in it's place as well, or gaseous hydrogen, as a stop gap when filling it, but I can't find any sources for that bit of information.

The existing answers do not accurately describe the procedure for the Space Shuttle system (or, I believe, for Apollo, but I am not 100% sure of that - see note at end of answer). The propellant tanks in the Space Shuttle's External Tank (ET) were never filled with nitrogen.

The initial condition for LH2 loading into the ET LH2 tank was with the tank and lines at ambient temperature. The tank was pressurized with helium to 6 psi above ambient.

Once the lines have been chilled down, "slow fill" begins. Helium is used to pressurize the ET LH2 tank to 24 psi above ambient. This pressure level is maintained by cycling the vent/relief valve as the tank is filled. LH2 then flows slowly into the ET LH2 tank until it reaches the tank's 5% level sensors.

The next phase is "fast fill", accomplished by pressurizing the storage sphere to a higher pressure and opening the transfer line valve. LH2 flows rapidly into the ET LH2 tank until it reaches approximately 85% full. At that point, the main fill valve is partially closed to reduce the flowrate. This configuration is used until the 98% liquid level sensors in the ET go wet.

At 98% the system transitions to topping - a slow fill to 100%. The transfer line valve and inboard fill and drain valve are closed, filling continues through the topping valve. The vent valve is opened, the ET LH2 tank is at ambient pressure.

Now the tank has been filled to flight level and the system modes to replenish. The main fill valve is closed and LH2 is added to maintain 100% loading and make up losses due to boiloff. This configuration will be maintained until the tank is pressurized with helium shortly before liftoff to provide the proper inlet pressure conditions for Space Shuttle Main Engine start.

A note on LH2 loading in Apollo: This document provides a sketchy description of the process, but the supplied graph clearly shows a slow fill/fast fill/topping/replenish process similar to that of Shuttle. 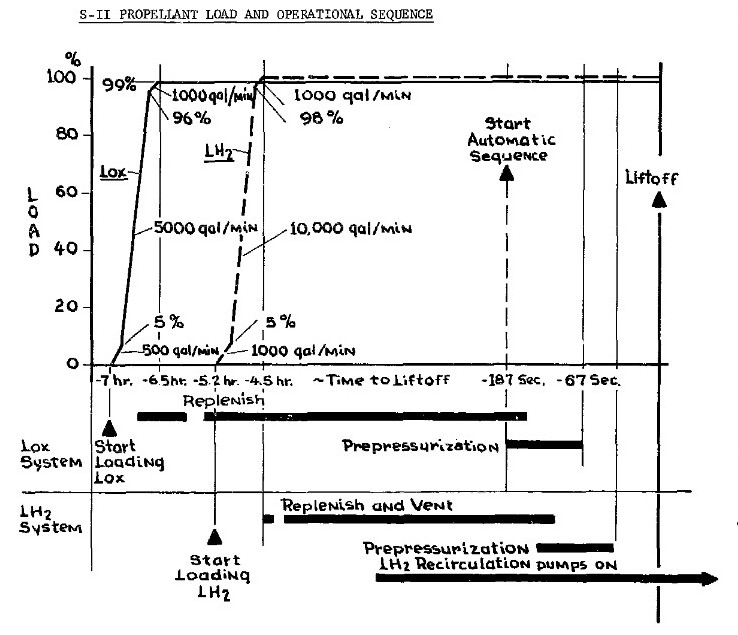 Not the answer you're looking for? Browse other questions tagged fuel engineering rockets cryogenics or ask your own question.

13
How was the space shuttle fuelled?
15
What happened to boiled-off gases from the storage tanks at Launch Complex 39?
12
Why was the Hubble Space Telescope purged with nitrogen gas?
4
Are rocket tanks being filled up until the last seconds before liftoff?
4
Why are propellant tanks filled from the bottom?
2
How much LOX is vented / wasted while loading?

17
In a cryogenic fuel rocket, at what pressure is the fuel injected into the engine?
23
How are cryogenic rocket propellants delivered to the launch pad?
11
How did the Space Shuttle keep its cryogenic fuel cold?
5
What methods are proposed for storing cryogenic fuels (esp. hydrogen) in space for months or years?
4
How were hypergolic propellants delivered to the Shuttle launch pad?
11
Falcon-9's subcooled LOX is continuously refrigerated in-situ, what about its subcooled RP-1?
3
Cryogenic storage in Starship header tanks
5
Have any rocket fuel systems actually been explosive, and could have detonated proper?
4
Why are propellant tanks filled from the bottom?