How is the Chebyshev method used by JPL?

In the DE packages, NASA gives us a series of coefficients for the Chebyshev approximation. As I understand it, those approximations are given by a series of polynomials $T_n$ for the interval $[-1,1]$. Then we consider $f(t)$ to be $\sum_i a_i T_i(\tau)$ (where $\tau$ is the normalised time). What is $a_i$ and what are its values?

Then we consider an approximation using a Taylor series defined as $f(t)=\sum_i b_i\tau^i$. What is $b_i$? Is it a Bessel function?

The last two relations represent the Clenshaw algorithm. Here I don't exactly understand how it works. Also does the number of 13 coefficients have something to do with Runge's Phenomenon?

Below are Eqs 3.52 through 3.59, from section 3.3.3 (Chebychev Approximation) in the book Satellite Orbits: Models, Methods and Applications* by De Oliver Montenbruck and Eberhard Gill Springer 2000, ISBN 978-3-642-58351-3 which is viewable in books.google.com 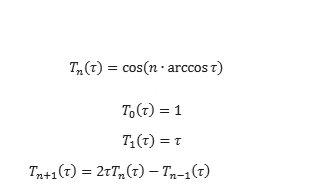 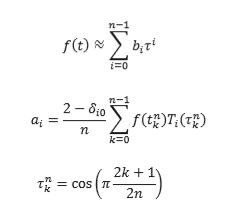 The $a_i$ are the coefficients for the Chebyshev approximation. As you say, NASA gives us those. That is what you find in the DE files, e.g. de430.bsp. (Don't click on that unless you want to download a >100MB file.) NASA/JPL needed a way to provide high resolution and high accuracy functions of time for the positions of the planets, and the most compact way was coefficients of Chebyshev polynomials. The functions are broken up into small intervals, within which the coefficients and resulting functions are valid.

No, the $b_i$ are not Bessel functions. They are the coefficients of a Taylor series that estimates $f$ over the $\tau$ for that interval. That equation was taken out of context, where that context was discussing why Chebyshev polynomials, $T_n\!\left(\tau\right)$ are used for the approximation instead of a Taylor series, which uses the polynomials $\tau^n$. The reason is that a Chebyshev approximation will require fewer terms for the same accuracy.

Not the answer you're looking for? Browse other questions tagged orbital-mechanics jpl-horizons ephemeris or ask your own question.

3
How to obtain Chebyshev coefficients directly from the JPL Horizon's interface?

10
Is there a way to extract the Chebyshev coefficients for a body from a SPICE kernel?
10
What is the exact format of the JPL ephemeris files?
6
I've almost learned to spell Chebyshev, why has JPL switched to Hermite interpolation for DE438?
2
What happened to time in 1962? (JPL Horizons changes displayed time from UT1 to UTC for dates starting in 1962)
3
Generating JPL HORIZONS parameters for use with JPL HORIZONS itself
3
How to obtain Chebyshev coefficients directly from the JPL Horizon's interface?
1
JPL ephemerides: effect of Saturn, Uranus and Neptune