How does the surface area of a heat shield impact the ideal angle of attack for reentry? 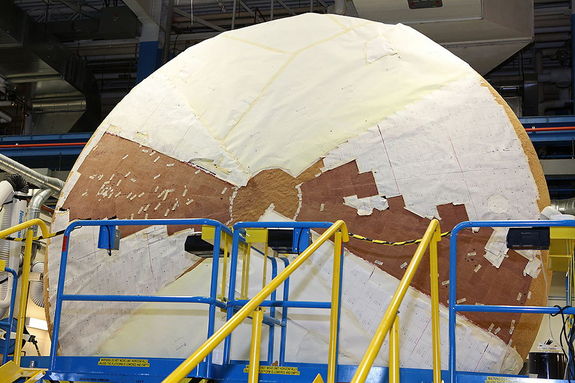 We know that for Apollo 13, the ideal angle of attack was no shallower than 5.3 degrees, and no steeper than 7.7 degrees. I assume that the changed dimensions of the Orion spacecraft make some differences to this - so my question: What difference does the surface area of the heat shield make to the reentry angle?

It's not the surface area by itself. There are two main factors. The first is the ballistic coefficient, $\beta$, which is the mass divided by the product of the surface area and the coefficient of drag: $\beta={m\over C_D A}$. The second is the lift over drag (L/D) of the vehicle, which for these blunt vehicles is usually obtained with an offset center of gravity.

As an approximation, as a vehicle gets larger, the mass goes up as the cube of the size, whereas the area goes up as the square. So you would expect that $\beta$ goes up as the vehicle goes up in size, even though the surface area is increasing. So Orion should have a higher $\beta$ than Apollo.

Higher L/D permits a wider entry flight path angle range, since you can go lift down on a shallow entry or lift up on a steep entry, and in general guide the vehicle down the desired corridor to prevent skip out or overheating.

18
At what angle did Apollo 13 need to reenter?