Could electric fans lift a rocket strait up like a multi propeller drone? [closed]

Could electric fans like the ones below lift a rocket? What is the amount of electricity needed to lift a interplanetary rocket?

I added the pictures and link to show people who are not familiar with electric propellers and impellers an idea of what is available. I do wonder if these types of engines have enough thrust to vertically lift anything?

Which propelling device would be the most efficient for a space elevator? 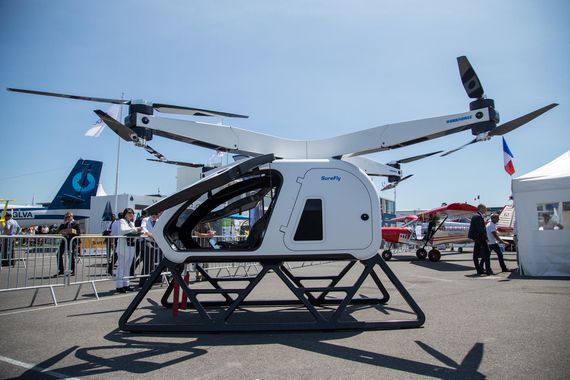 Turbines don't work in the space, there is no air.

It might be usable as the first stage of an orbital, or suborbital vehicle.

The main problem with it is not the energy source, but that the size of the drives are too big.

The maximal lift mass of the largest plane ever built, the Antonov An-225, is 640tons. A Soyuz total mass is around 300 tons, more than half of it is its first stage.

However, the maximal speed of the Antonov is around 800 km/h, which is nowhere from the some km/s speed of a Soyuz after its burned out first stage.

To have a supersonic first stage is not impossible, mainly engineering reasons are avoiding it (it could work, but with rockets can go better). And note, we have very few technology to build large supersonic crafts. The largest is the Tupolev Tu160, a Russian strategic bomber, its maximal takeoff weight is 275 tons.

Not the answer you're looking for? Browse other questions tagged launch crewed-spaceflight propulsion interstellar-travel or ask your own question.

14
Launch to orbit delta-v penalty from Venus compared to Earth?
1
Which propelling device would be the most efficient for a space elevator?

5
Could Earth's electric grid be used to power rocket launches via cable?
6
Would a 'small' rocket like this reach space?
7
Can we thrust a rocket from earth using electric power?
4
Could a “nuclear turbo-jet” be built?
28
Would a grinding machine be a simple and workable propulsion system for an interplanetary spacecraft?
0
How much additional thrust could the electron gun produce for electric sail propulsion?
1
launch rocket like bullet from steam/air rifle?