Has a NASA administrator ever explained US military initiatives in Space to the press before this?

A search of the site will show that from time to time the political aspects of NASA (a US government agency) or the Space Exploration aspects of politicians have been considered on-topic in this site. I've summarized some examples in these three comments (1, 2, 3).

Below is a screen shot from a Fox News clip NASA explains need for protecting US assets in space; NASA administrator explains the purpose of President Trump's proposed Space Force. dated Aug. 10, 2018 - 4:54.

As these are unprecedented times for an unprecedented administration, this might be yet another consistent surprise. NASA directer Jim Bridenstine is perhaps an unprecedented NASA administrator, with a background in rocket racing and politics rather than science or engineering. (see also Rocket Racing League (1, 2, 3, 4)).

Question: Has a NASA administrator ever explained US military initiatives in Space to the press before this? It could be either a proposed initiatives, or an actual one. 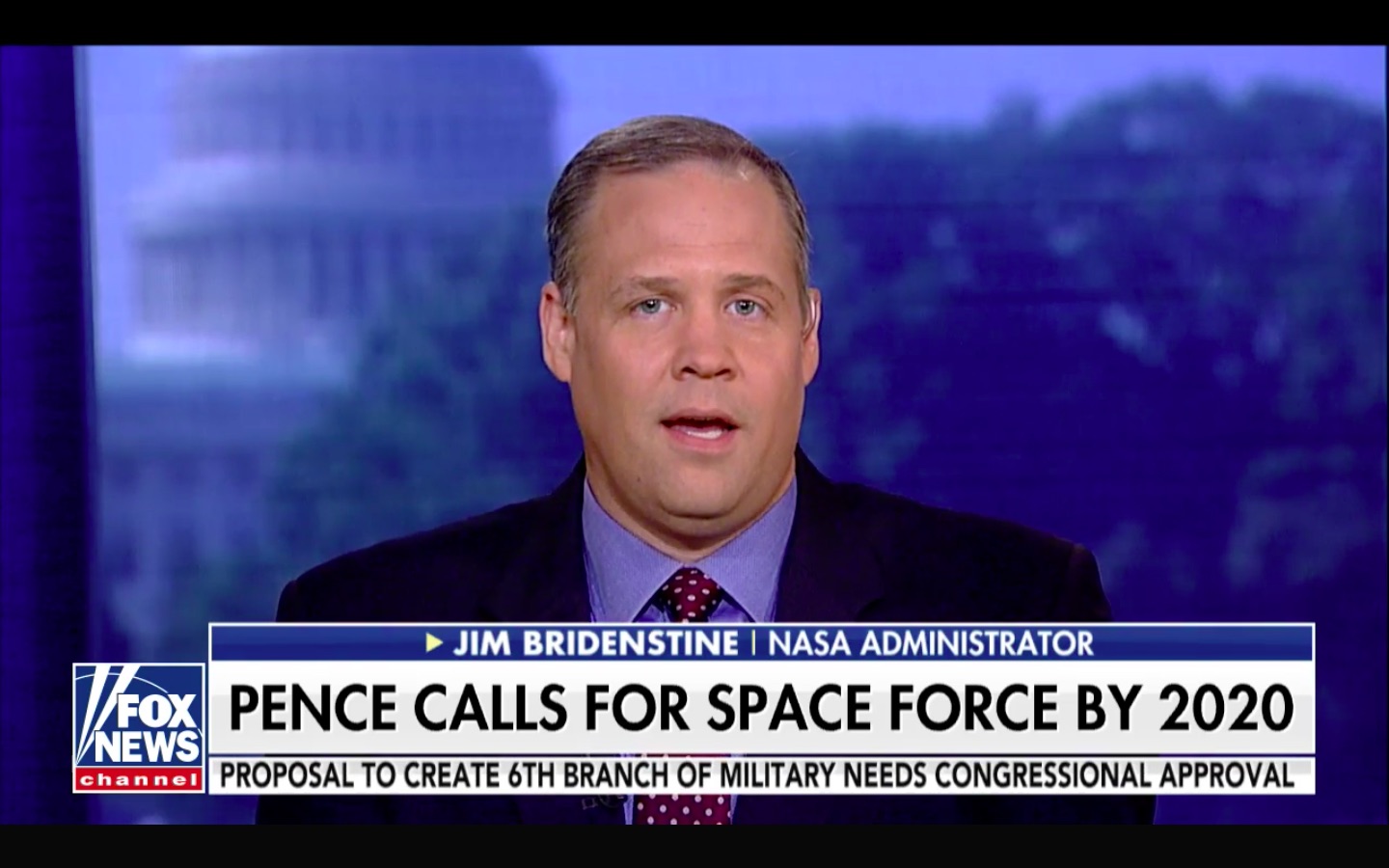 In former NASA Administrator Charles Bolden's speech at the Air Force Association Air & Space Conference and Tech Exposition in 2011, he explained a US military aerospace initiative, specifically the joint development of a practical hypersonic vehicle:

The United States Air Force has been a key partner in many of NASA's aeronautics achievements over the decades. Right now the Air Force Research Laboratory is part of our X-48 research team. The X-48 is a blended wing body configuration – no tail and a wing that blends into the fuselage. It has the potential to achieve that ultimate goal I mentioned earlier -- dramatically reduce noise, emissions, and fuel use simultaneously. There's a 21-foot wingspan remotely piloted X-48 test vehicle out at NASA's Dryden Flight Research Center that's completed a first round of test flights. It's been modified based on what we learned in those tests; round two of testing has just begun. At the hypersonic level, we're building a new legacy with the Air Force through development of the air-breathing scramjet propulsion technology. In 2004, flights of the X-43A uncooled 13 scramjet – each about ten seconds – broke speed records. One flight clocked in at Mach 9.6 or about 7,000 mph. For scramjets, though, it's as much about actual operation time as speed. In 2010, the X-51A fuel-cooled scramjet achieved an operation time of nearly 150 seconds. Right now work continues on developing a practical hypersonic vehicle, with more sophisticated technology flight experiments planned in the next few years.

This was an event open to and attended by the media, so it would count as a press event.

Not the answer you're looking for? Browse other questions tagged nasa history international-politics policy or ask your own question.

4
How is payload fairing designed?
0
NASA at sIxty years, will there be a new moonshot mandate?
3
What is the response to the criticism of LOP-G project by Zubrin and others?

8
Has Earth ever sent out a repeating signal into space?
7
What role does the NASA deputy administrator play?
1
What will the US send to Mars as mentioned in this statement to the press?
4
How will the Lunar Gateway go to L2 and L1; how much delta-v is needed?
1
How will the Gateway-before-boots sequence benefit US business, economic and technological development?
1
How did NASA fund searches for extraterrestrial life before 1993? How were the searches done?
5
space piracy, has it ever happened?
2
What typically happens to the Acting NASA Administrator when a full Administrator is approved by the Senate?
10
Has the ISS ever "flown upside down"? Has the cupola ever "looked up"?