What is this combination tracking telescope and helical antenna pair? was it really used, and who is/was FlightLine?

I spotted the image below here which I found here (also seen here).

Zooming in on this combination pair of telescope trackers and pair of RHCP and LHCP (right- and left-handed circular polarization) helical antennas, I see the word FlightLine, and a drawing of a shuttle/aircraft of some kind.

I'm really interested in this combination of a pair of optical telescopes and a pair of end-fire antennas, mounted on a single co-articulated platform. What is this, was it really used, who is/was FlightLine?

Though this appears to be either auto-tracking (there are several other instruments co-mounted) or guided by people remotely, I'm still working on the related question What were those motorized human-piloted platforms with helical antennas called (tracking launches)?. 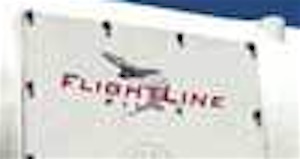 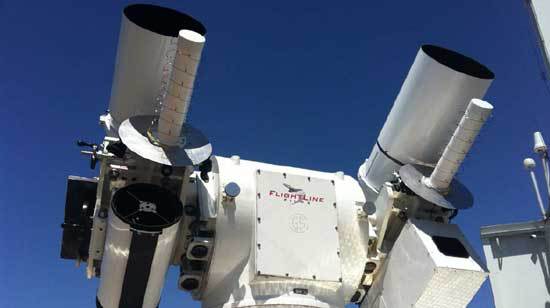 Google led me to FlightLine Films' website which describes this device as follows:

The JLAIR 1 & 2 Optical Tracking Systems offer our clients capabilities not previously available to civilians or Production Companies. Each carries a variety of high-power zoom lenses and large telescopes attached to 8000 lb motorized pedestals, which were previously used to track the Space Shuttle launches. The imagers used with the tracking system include HD video, High Speed 4K, Shortwave Infrared, and Digital Still cameras. The system can easily be set up for 35mm motion picture cameras including the Arri 435 or 65 and 70mm cameras including IMAX. The JLAIR control rooms allow technicians to select the best images available, and transmit them in real-time to Mission Control and/or broadcast viewers. The trackers are well suited for tracking high performance aircraft as well as missile and manned launch vehicles.

The website lists various events where this system was used, including multiple launches of Blue Origin's New Shepard, as well as Red Bull air races.

The Helical antennas are no longer in use. They were originally fitted for the RedBull Stratos project. Currently only scopes are fitted and outfitted with both high speed and SWIR camera systems.

15
Why have four parabolas on a ground-side array instead of just a single large one
3
What were those motorized human-piloted platforms with helical antennas called (tracking launches)?

1
What is this tiny articulated dish antenna-like thing on Zvezda?
3
What were those motorized human-piloted platforms with helical antennas called (tracking launches)?
3
Who is the unnamed astronaut in this uncredited photo used in commercial promotional material?
3
Need help identifying this (likely to be) phased array antenna used to track launches
2
Function and nature of the RHC/LCH pair of cables to New Horizons's dish antenna secondary mirror?
2
Where is the "antenna farm" from which this Soyuz launch photo was taken?
10
What antenna is this in an Apollo 15 LM photo?
3
How does this large, flat antenna made from overlapping circles at Australia's Carnarvon Space Tracking Center work?