I need help identifying the (what I believe to be) flat (and possibly phased) array antenna shown next to the tracking telescope in this photo, which can be found both here and here where the annotation in Russian

is translated by Google to

Pay attention to the installation with flat antennas on the right

and in the video below, where I also show a screen-shot.

The audio of the video suggests it might be radar, rather than a receiver for telemetry. 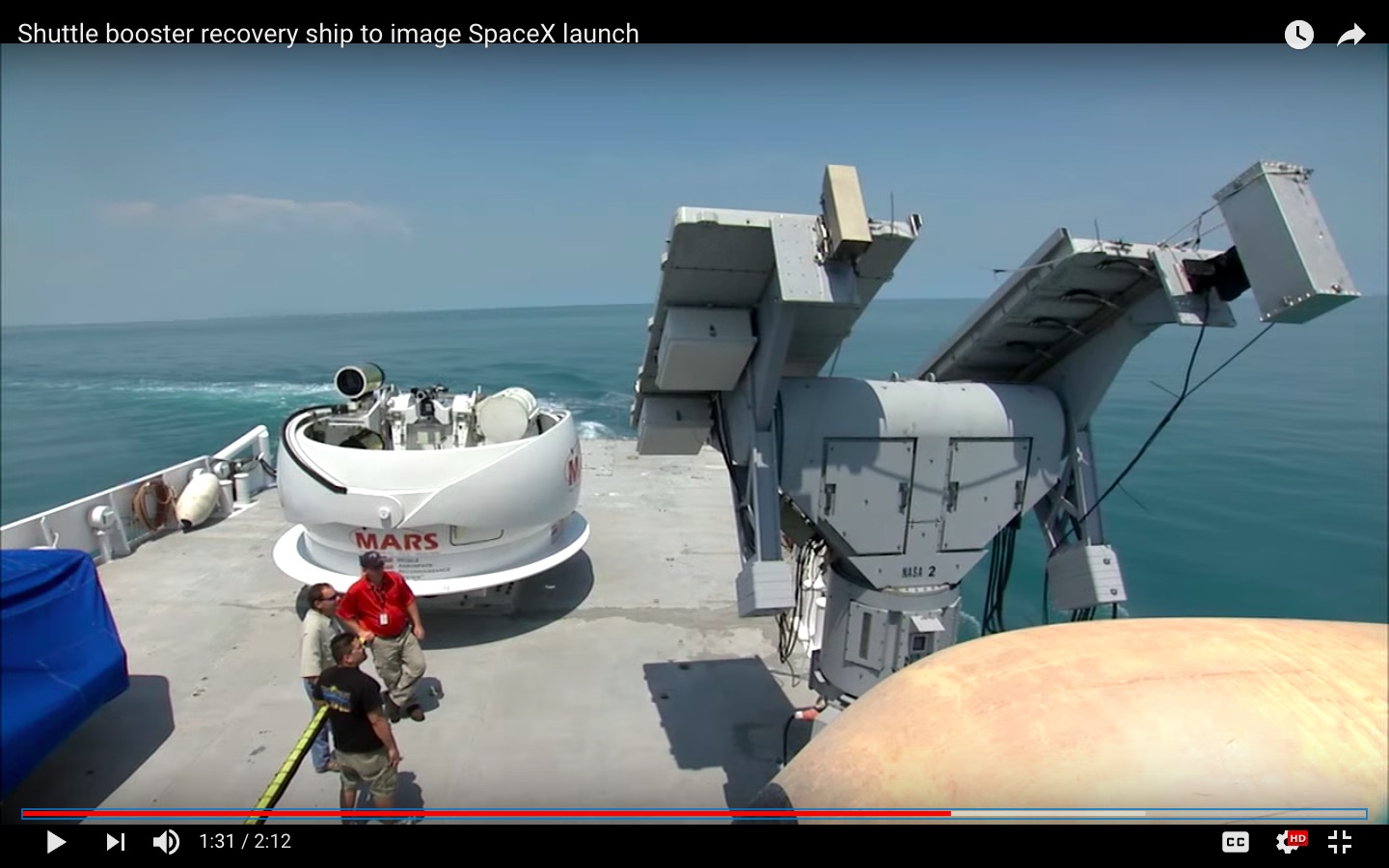 The ship in this video is NASA's recovery ship Freedom Star. This is both mentioned and seen in the video, and it is also identifiable by the fact that the MARS is on board. That said, the radar in question is clearly the Weibel Scientific Continuous Pulse Doppler X-band radar that Wikipedia mentions was mounted on the Liberty Star. The radar is easy to identify--you can see a picture of it being transported in this DVIDS article.

According to NASA article "Shuttle launch imagery from land, air and water", the Weibel X-band radar was mounted on Liberty Star so that the ship could position it downrange of the launch site. It would work with another Weibel X-band radar on a ship south of the ground track to provide velocity and differential Shuttle/debris motion information.

The DVIDS article mentions that the Brandy Station 2005 transporting the Weibel X-band radar "allows both NASA retrieval ships, Freedom Star and Liberty Star, to recover the boosters for refurbishing and reuse keeping the program as economical as possible." So it sounds like this is an instance where Wikipedia's knowledge may have been limited, and the Weibel X-band radar was, in fact, mounted on both recovery ships.

6
How are phased array antennas used in spaceflight? Benefits and limitations
8
When is a phased array antenna not a phased array?
4
What would be a “big picture” understanding of how the orbits of Earth satellites are monitored?
3
What were those motorized human-piloted platforms with helical antennas called (tracking launches)?
5
The appearance of TESS' dish seems to be evolving, what will be the final configuration?
1
What is this combination tracking telescope and helical antenna pair? was it really used, and who is/was FlightLine?
2
How does this fast-slewing SpaceX rocket-tracking dish track a moving spacecraft?
1
How do Inmarsat 5 F4's beams correspond to all of these antennas and feeds?
3
How exactly were the signals from quad dishes of Apollo Deep Space High-Gain Antenna or Russian B-529 processed for local control of tracking?
3
How does this large, flat antenna made from overlapping circles at Australia's Carnarvon Space Tracking Center work?