This test is the first that explores the movement of a container in a cable in space . In the experiment, two ultra-small cubic satellites, or "cubesats", will be released into space from the International Space Station (ISS).

They will be connected by a steel cable, where a small container, which acts as an elevator car, will move along the cable using its own motor. A camera connected to the satellites will record the movements of the container in space, according to the Japanese newspaper The Mainichi, citing authorities from the Japan Space Agency.

Each "cubesat" measures just under 10 centimeters on each side. The "cubesats" will be connected with a 10-meter steel cable so that the "elevator car" can move forward, according to the report.

The new Japanese project will be the first test to move a container similar to a car through a cable in space. If the experiment is successful, it could significantly increase the interest in the transport system of space elevators.

Question: How will the two cubesats establish and maintain a significant amount of tension in the cable strung between them, necessary for a realistic test? Will the vehicle moving along the cable cary its own power source (e.g. solar-photovoltaic, battery, wind-up spring) or will power be beamed by laser or electromagnetic radiation, or by conductors?

The cube-sat may easily maintain tension by flying in tandem and many formation flying missions have maintained a constant distance pretty well. Have a look at MAST(Multi-Application Survivable Tether) experiment.It's the most similar one I could find to this and while it did not work, you may find more information about how they designed the system."After deployment of the two CubeSats from the P-POD deployer, a timer will trigger a separation mechanism that will push the two nanosatellites apart. The upper CubeSat in Figure 3 will deploy a 1 kilometer long survivable Hoytether in between the two spacecraft. The lower CubeSat has a tether release mechanism that will enable it to separate from the tether upon command".Having one cube-sat tethered to the other and then launch the elevator object in between them is just the simple experiment in both missions but the tether length has been a challenge as so the 10 m proposed length seems more doable compared to previous missions. Another report I read just says that they intend to monitor elevator movement in space so it might be launched from one cube-sat and/ or have something similar to a counterweight system i.e., reeling in from one satellite to the other or similar to the MAST mission may have the elevator body crawling up and down the pseudo-taut tether. I'm however unsure about the elevator dynamics and have opined about the system. Hope you find it useful 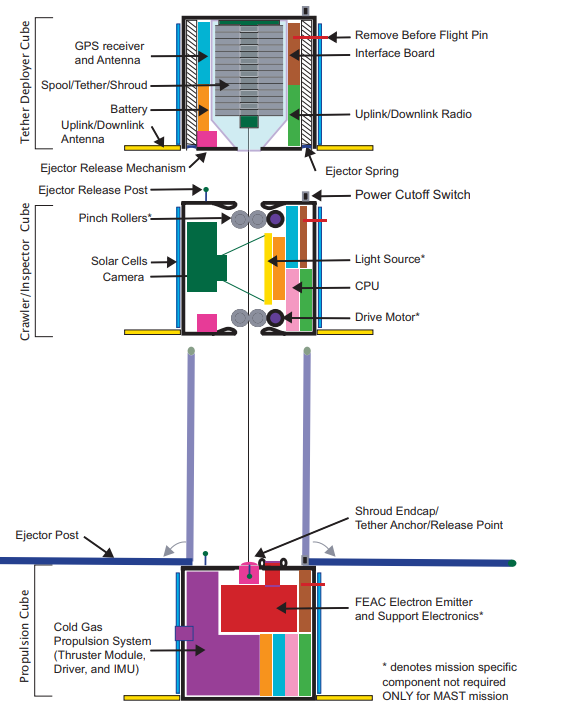 Not the answer you're looking for? Browse other questions tagged cubesat power testing space-elevator jaxa or ask your own question.

13
Primary payload influence on hitchhiking CubeSat integration and testing?
11
Would a 'space elevator'/sling on a rotating asteroid work?
9
Documentation and testing for a CubeSat launch?
6
How would the foundation/anchor for a space elevator work?
6
"Propeller-head" polar space elevator?
5
How will the angular momentum of a Space Elevator be preserved?
3
If a space elevator uses both compression and tension design, will we still need new materials?
1
Space elevator idea
7
How do engineers know new engines will work nominally once they reach space?