This image of the Space Shuttle is truly beautiful, but is it real?

The image looks plausible to me, refraction in Earth's atmosphere, a crescent moon nearly back-lit by the Sun at sunset, colors in the atmosphere, the Space Shuttle with it's doors open...

But it looks too good to be true, I'm not sure this specific view of the Shuttle and Earth's atmosphere is viewable geometrically from the ISS, even with a telescope, and a reverse image search only shows me other Spanish language news items (suggesting they come from a similar source) and no links to NASA for the original.

Is this space-themed artwork, or is it a real photo, possibly taken from the ISS? 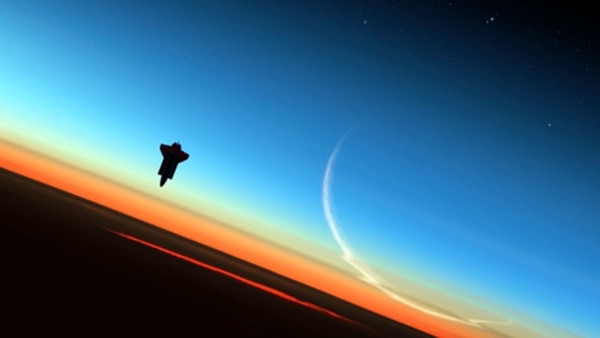 This image is very similar to the following image

with the following description

Though astronauts and cosmonauts often encounter striking scenes of Earth's limb, this very unique image, part of a series over Earth's colorful horizon, has the added feature of a silhouette of the space shuttle Endeavour. The image was photographed by an Expedition 22 crew member prior to STS-130 rendezvous and docking operations with the International Space Station. Docking occurred at 11:06 p.m. (CST) on Feb. 9, 2010. The orbital outpost was at 46.9 south latitude and 80.5 west longitude, over the South Pacific Ocean off the coast of southern Chile with an altitude of 183 nautical miles when the image was recorded. The orange layer is the troposphere, where all of the weather and clouds which we typically watch and experience are generated and contained. This orange layer gives way to the whitish Stratosphere and then into the Mesosphere. In some frames the black color is part of a window frame rather than the blackness of space.

In a very unique setting over Earth's colorful horizon, the silhouette of the space shuttle Endeavour is featured in this photo by an Expedition 22 crew member on board the International Space Station, as the shuttle approached for its docking on Feb. 9 during the STS-130 mission.

However compared to the actual photo it looks modified. There's no moon or stars in the original. There are three photos taken later

but you can see that nowhere you can see stars and moon. Even if some unknown photo of this sequence has captured the moon it seems that for Feb. 9 2010 the phase was somewhat different (taken from the Heavens Above) 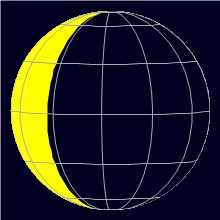 A reverse image search (once you tell Google you're looking for the space shuttle, not base jump) brings you to the picture on Getty Images, which states:

Some further information on the manipulation or possible genuine situation can be had by analyzing the perspective in the image.

I measured the length of the orbiter as 49 pixels and the diameter of moon as 251 pixels in the image. Because the apparent size of the moon is approximately 0.5 degrees when camera is anywhere close to earth, we can calculate that the orbiter is $49/251 \cdot 0.5 \approx 0.098 \,\mathrm{deg}$ long.

I guess this is somewhat plausible when compared with the description of the genuine images: "prior to STS-130 rendezvous and docking operations with the International Space Station", though it seems quite far away and would require a telescope. I kind-of hoped to find an implausibly long or short distance.

Not the answer you're looking for? Browse other questions tagged iss nasa space-shuttle imaging space-art or ask your own question.

10
Could an ISS astronaut photograph something like this 1km "Van Gogh" if they knew it was there?
7
Is there a telescope on board the ISS?

21
Why aren't the ISS's nor Space Shuttle's radiators black?
4
Now what do we think? Is this purple dot really caused by Cassegrain optics and coherent backscattering?
101
Is this "Attach Orbiter Here / Note: Black Side Down" sign on the Shuttle Carrier Aircraft real?
17
Who is the artist of this image appearing in an article about a Russian space laser?
4
Who is the NASA Space artist of this circa 1978 satellite montage? Does a key listing each item exist?
3
Is this ISS artwork old but accurate? Was there a radiator that looked like this once?
2
Identify this astronaut and shuttle mission
3
Does this image of 91-core OTRAG "asparagus-staging" show a real launch, or is it "space-art"?
4
What is this font used in Apollo / early Shuttle NASA documents? (possibly OT)