Have there been any spacecraft with internal SRM other than CONTOUR? 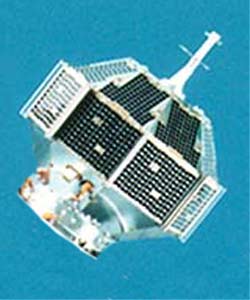 According to Gunter's Space Page's Muses A Lunar Orbiter (Hagoromo):

It was launched piggy-back on the Muses A (Hiten) probe into a highly elliptical Earth orbit which passed by the Moon ten times during the mission. At 19:37 UT on 18 March 1990 as Hiten approached its first lunar flyby, the small Hagoromo spacecraft was released into lunar orbit, making Japan the third nation to orbit the Moon. Although the S-band transmitter aboard Hagoromo had failed on 21 February 1990, the ignition of the Hagoromo deceleration rocket was confirmed by ground observation at 20:04:03 UT, the estimated orbit was 7400 × 20000 km with a period of 2.01 days. No contact could be established after orbit insertion.

@DavidHammen's answer to the question "Was Hagoromo's capture into lunar orbit ballistic capture or more propulsive?":

@DavidHammen's answer to the question "How could tiny Hagoromo have been seen visually from earth confirming its lunar orbit?" is a click away and worth the read, so I won't re-quote it here.

See both (either) linked question for more images of this kawaii spacecraft and it's "parent" craft.

The Soyuz descent module has SRMs that are fired just before touchdown. Does that count?

Not the answer you're looking for? Browse other questions tagged spacecraft mission-design solid-fuel or ask your own question.

5
Can solid rockets be used for flexible burn time by jettisoning them?
8
How feasible is the Moonspike mission?
2
Have any deep-space spacecraft supported same-band turnaround of Earth-based doppler measurements?
6
Why did Virgin Galactic switch back to HTPB after one launch using thermoplastic polyamide (i.e. nylon)?
6
Which rockets use(d) solid-fuel upper stages?
8
How is solid rocket fuel sourced?
5
Have solid dish antennas on deep space spacecraft (as opposed to meshes) ever provided any other helpful function? As meteor shields perhaps?
4
Was there any launch vehicle possible that could have been used for a heavier New Horizons with enough fuel to enter Pluto orbit? (adding ~10 years)