Why do GPS satellites have increasing eccentricity over time?

When comparing GPS, Beidou, Galileo, GLONASS, and potentially other GNSS, we can see that the eccentricities of GPS spacecraft are increasing with time (i.e. apogees increasing and perigees decreasing).

Is this an orbital perturbation that GPS has decided to leave uncorrected in the space segment (preferring a software solution, which should work) while other GNSS maneuver to minimize?

The below plot was generated using TLE eccentricities from Space Track for all GNSS spacecraft launched after ~October 2011. 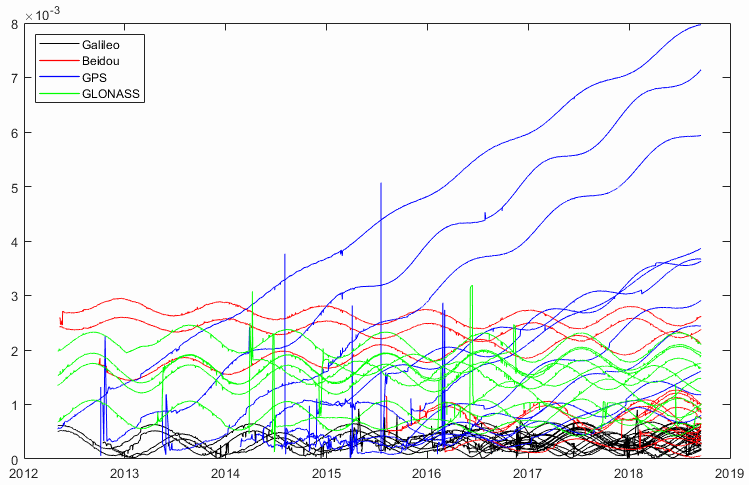 I wouldn't have suspected GPS satellites to be corrected less often than other GNSS. But I would guess they don't need to be as close to a circular orbit so long as the orbital parameters are reasonably accurate in the ephemeris the satellites send to GPS receivers. So long as the user can determine the satellite's position, it shouldn't matter too much if the orbit is more eccentric than other satellites.

Not the answer you're looking for? Browse other questions tagged orbit gps station-keeping gnss or ask your own question.

11
Do operating GPS satellites ever make orbital maneuvers for station-keeping?
10
Does the “17” really mean anything with respect to GNSS orbits being rational factions of a sidereal day?
3
Lunar satellite navigation system

37
How does GPS receiver synchronize time with GPS satellites?
5
Why do gps satellites rotate over the Earth
39
Why are the GPS constellation satellites in such a high orbit?
5
How does GPS module gets time even before a fix?
11
Do operating GPS satellites ever make orbital maneuvers for station-keeping?
3
Current status of the use of GPS multi-antenna time differentials for satellite attitude determination?
13
Why multiple GPS satellites are never launched on the same rocket?
1
How to convert GPS time to TAI time to UTC time?