In this July 2018 tweet by Cdr. Scott Kelley, with the north face of Mt. Everest over his shoulder, he mentions his "Emergency" watch.

I've searched and then found the Hodinkee.com article Hands-On: The Breitling Emergency, Or The Safest We’ve Ever Been With A Watch.

Last week, we welcomed astronaut Scott Kelly back to Planet Earth following his 342-day mission in space by taking a look at some of his watches – both in flight and on Earth. And many of you expressed some interest in what appeared to be a larger-than-life 51 mm wristwatch. It is in fact very real – developed specifically for the most perilous missions. Today, we go hands-on with the Breitling Emergency (not Kelly’s mind you).

That link in the block quote is also worth checking out.

Reading further in that article, it says

A follow up to the 1995 Emergency, this version (originally introduced as the Emergency II, although the "II" has been dropped) the watch presents an improved personal locator beacon (PLB) capable of transmitting its coordinates on two separate frequencies. The decision to create a dual-frequency version of the original Emergency is a result of the decision, by emergency beacon monitoring agency Cospas-Sarsat, to phase out its satellite monitoring at the long-standard 121.5 MHz aviation emergency frequency – which was also used by the first Breitling Emergency watch. (Cospas-Sarsat is a satellite-based search and rescue system, which has been around since 1982; Cospas is an acronym for "Space System for the Search of Vessels in Distress" in Russian, and Sarsat stands for "Search and Rescue Satellite-Aided Tracking.")

The latest beacon now carries a digital signal on the 406 MHz frequency via Cospas-Sarsat's worldwide satellite system, on top of an analog signal on the 121.5 MHz frequency, used by search and rescue (SAR) teams to home in on victims at land, air or sea. Cospas-Sarsat originally monitored both frequencies. The FAA in the United States began requiring 121.5 MHz emergency beacons on civilian aircraft in 1973, and though the frequency is still monitored (which is why the Emergency transmits on both) 406 MHz is both longer range and gives better accuracy.

To pick up signals from a watch, I would suspect that you'd need to be in LEO, and fairly close-by. The problem there is that it takes quite a large constellation of satellites to provide continuous coverage of all points on Earth.

Question: So I'd like to ask which satellites can hear emergency signals from Scott Kelley's watch? How many of them are there, what's the altitude, and how quickly will they detect a signal from any random spot on Earth and then route the message somewhere where action can be taken? 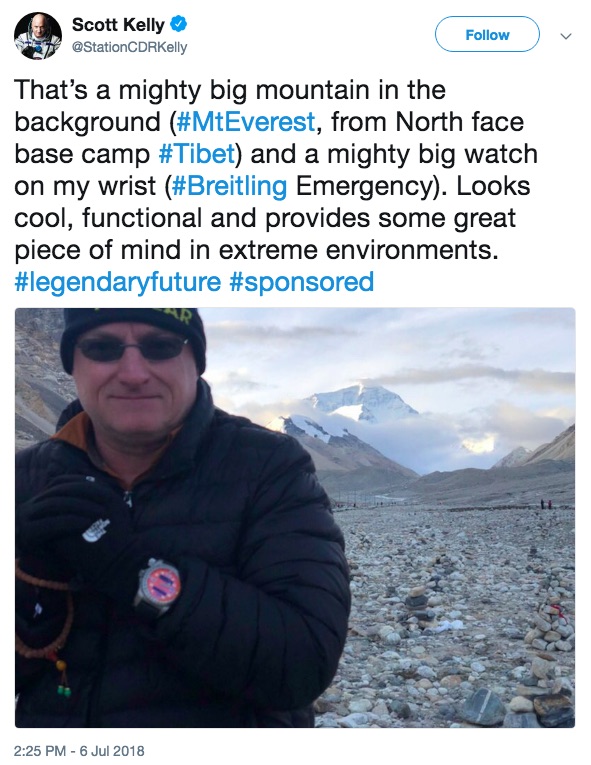 The Sarsat instruments [...], receive these messages. They are downlinked to the distress terminals — known as Local User Terminals (LUT) — distributed around the globe. The message are then processed and distress alerts generated. The Mission Control Centres (MCC) receive those alerts and relay them to the appropriate Rescue Control Centre (RCC), which begins the actual search and rescue operation.

The SARR instrument receives 406 MHz beacon transmission bursts and retransmits them immediately on the dedicated 1544.5 MHz downlink to the LUTs. Because there isn't a memory within SARR this service only works in local mode, i.e. the beacon and LUT must be in simultaneous view of the satellite. All processing is performed by the LUT. Each transmission is detected and the Doppler (change in wavelength caused by the motion of the satellite, with respect to the beacon) information calculated and a beacon position is then determined.

SARP receives and processes emergency signals from the 406 MHz beacons. It determines the identification, frequency and time of the signal. These pre-processed data are then fed, in real time, to the SARR instrument for immediate transmission, plus simultaneously stored in the memory for additional later transfer to the LUTs. This process can locate beacons within an accuracy of 5 km. A low-power 121.5 MHz homing signal included in most 406 MHz beacons helps rescuers determine the final location.

These instruments are secondary payloads on other missions, and belong to three different groups of satellites:

A list of the currently active payloads is provided by Cospas-Sarsat under Current Space Segment Status and SAR Payloads.

Note that the GEOSAR satellites are not used to determine position, since they can not use the doppler shift, but are still valuable tools for quick responses:

The GEO satellites are not able to use Doppler location processing since they have no relative motion between them and the emergency beacons. Therefore, they are not able to determine a location for a beacon. They can, however, provide immediate alerts. This is a valuable tool for SAR personnel since it allows them to begin their initial verification of the alert using the National 406 MHz Beacon Registration Database. Often this detective work yields a general location of the vessel or aircraft in distress and SAR assets can be readied or dispatched to that general area.

But the huge advantage of the GEOSARs seems to stem from the fact that some beacons can indeed track their location via GPS and transmit that as well:

There is a significant advantage with a GEOSAR satellite detection of a beacon with encoded location. Here’s how it works: emergency beacons determine their location using a GPS receiver that is either integrated into the beacon (called a location protocol beacon) or fed by an external GPS receiver. This accurate location information (generally around a football field in size for positional accuracy) is then encoded into the 406 MHz signal that is transmitted by the beacon.

The answer is given within the question, the emergency signals are received by the the International Cospas-Sarsat Programme satellites.

The Cospas-Sarsat system space segment consists of SARR and/or SARP instruments aboard:

From the webside of the watch:

An article about the watch.

I will extend this answer within the next days.

I'll supplement @Polygnome's answer with a literal answer to the question as asked using details from this link cited there. This presumes that even the satellites in GEO, roughy 60 times farther away than LEO can receive signals from a wristwatch. For more on that see Can I transmit signals to geostationary orbit from a wristwatch?.

Currently (30-Apr-2019) about fifty possible satellites, but of course it is far fewer than that at any given time and location:

According to Transition to MEOSAR (White Paper), it seems like the focus is on the spacecraft constellations in MEO. GEO provides no Doppler shift and therefore no information about location within the hemisphere, and LEO would provide spotty coverage unless a very large number of satellites are so equipped.

Not the answer you're looking for? Browse other questions tagged radio-communication satellite-constellation emergency or ask your own question.

6
Is there any spacecraft that is ping-able?
16
Why are there advertisements in the Russian ISS flight control room?
8
How to calculate density of unknown planet?
2
Would a self-winding watch work in space without gravity?
1
Can I transmit signals from a wristwatch to geostationary orbit?

15
How is RF spectrum usage coordinated in Mars orbit?
3
If an ISS emergency requires pressure suits temporarily, can they still use the laptops? Move the cursor?
12
How can just making the ground broadcast stronger neutralize a zombie(sat)?
1
Which is stronger per Hz, radio signals from a Mars spacecraft, or Mars' blackbody radiation?
6
From whence (what ground stations) do the world's major space agencies receive signals from their missions?
3
What would be the longest hypothetical emergency which would confine the Apollo astronauts to their suits?
4
Why are deep space "beacons" usually UHF, so low (in freq) that DSN can't hear them? And how unusual is it for a Mars lander to have an X-band beacon?
1
How does Quantum change it's antenna's shape? (Flagship UK telecommunications satellite just launched)